en.infoglobe.cz » CZ, Krkonoše: Sněžka – A Climb on the Highest Czech Mountain from Pec

The highest Czech mountain and its height 1,602 meters knows probably every pupil in the Czech Republic. There lead many roads to the mountain. Doesn’t matter if you choose a long trek starting from east at Pomezní boudy, from south at Pec or from west at Špindelrův Mlýn, you will have beautiful views over surrounding landscape in clear weather. You will see other thousand meters high mountains Polish part of the Krkonoše mountains. You will always have something to look at tnere, doesn’t matter if you go there in summer or winter. Sněžka was a goal of our first trek this year. Despite there are shorter tracks we choose relatively popular ridge track across Richter’s cottage, Výrovka and Luční bouda, i.e. a southeast track. During the afternoon we set out from Pec around architectonic disaster known as the Horizont hotel. We headed to Velká pláň and 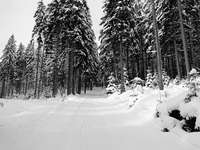 next to Děvín hotel, the last snack stop for a while. From there a wide road is starting to getting quite steep character, in some parts almost 20% that is on 4 kilometers really hard. Only monotone forest scenery and an endless road climbing up to the distance – this can’t discourage us. Certainty of panoramas is worth of hard work. The road was slowly opening to us and after a while we reached a meadow where was the Richter’s bouda (1206 meters above the sea level). I recommend you to have a small stop there, but only for a small beer since the worst is still ahead of you. There is a green track KČT (the Czech Tourist Club) from Richter’s chata that, after about two kilometers of steeper ascends to long-desired ridges. Who will see Výrovka cottage (1368 meters above the sea level) as the first, reached a half-victory already.

Výrovka or Vejrovka, as locals say, was built already in the 18th century on a important tourist tracks crossroads of Pec, Špindlerův Mlýn, Luční bouda, Západní planina, Vrchlabí and many other important places of tracks in the Krkonoše mountains. Originally a shed, later a cottage and a hostel, has been through many renovation through its 100 year history. In the beginning of the 1990s architect Vokatý gave its present shape. But we again set out, this time to well-visible Luční mountain that was so far hidden behind the main ridge of Sněžka. A long hillside (1,555 meters) of the highest Czech mountain would deprive us of some of our stamina, however, wide panoramas of the land of east Krkonoše mountains was worth of it.

rather inconspicuously. On the contrary, the ridge of Sněžka is striking however; it was partly shadowed by a massive construction of Luční bouda. Its history is also interesting. On the place of the oldest ridge-cottage in the Krkonoše mountains used to be a small homestead already in 1625, as a corner stone, which was found during a renovation in 1869, showed. A building, mill, and a homestead burned several times. Later its tradition as a hostel was renewed. During the Second World War it was renovated again after a fire in 1938. It was done mostly thanks to German Wermacht that used the homestead as a training

camp for female radio operators, Hitlerjungend, and selected combat units. The rough land gave them enough space to train fight in northern areas or in eastern front. In that time Luční bouda flourished and expanded, its capacity and agricultural usage. During the second half of the 20th century the main administrator was sporting association that performed there winter trainings and courses for youth. In the 1990s the Czech Tourist Club had there its headquarters but it was replaced by a new owner. In that time the building had to be closed for

two years because its poor condition. From the year 2004 a project a mountain hotel with 150 beds emerged. It had also an interesting cultural program that included occasional concerts of national music stars. However, environmentalists who try to protect precious fauna and flora of KRNAP do not welcome them. There is also a minibrewery that makes a special Paroháč bear, actually several types of them. Another attraction is a wellness equipped by traditional Finish sauna, fitness, Jacuzzi and even a beer spa! a to hned v několika verzích.

The mountain town of Harrachov, which is surrounded by the beautiful Giant Mountains, offers many...