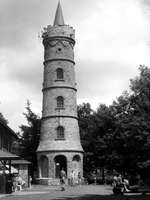 railway station lying on the line between Bakov, Decin and Rumburk. From the first station we follow the green signs to crossroads U Rance and thence up the red trail to the top. For overcoming the short, but steep climb we will be rewarded with views of the picturesque, nearly a hundred feet stone tower. Lookout at Fir is a classic heroine of the drama with a happy ending. Along with the nearby tourist lodge is served to the public from 1891 until the Second World War, when it has received the sad era of decay. Perhaps only thanks to enthusiastic Krejcovovi family and the town of Jiretin pod Jedlovou after more than 50 years and the revival in 1993 inaugurated. Today, because of its gallery we can enjoy a panoramic view of the peaks of the Luzicke Mountais, Jizerske Mountains and even the Ore Mountains , Bohemian Highlands , Czech Paradise or the Krkonose. In a tavern below the observation tower you may find a good couisine. Not only some lost tourists will appreciate this but also skiers crossing riding on slopes.

After Jedlova we descent back to the crossroads U Rance. The red tourist trail leads us to the preserved ruins of a medieval castle Tolstejn . If we pay for the admission, a staircase would get us to the highest rocks, where we would see the nearest peaks and settlements. In the castle restaurant, we refresh ourselves and continue along the red trail to Luza (793 m), the highest peak in the mountain range. Once in the village of Lesna, we cross a busy expressway, and find ourselves again in the embrace of silent forests and rugged cliffs. 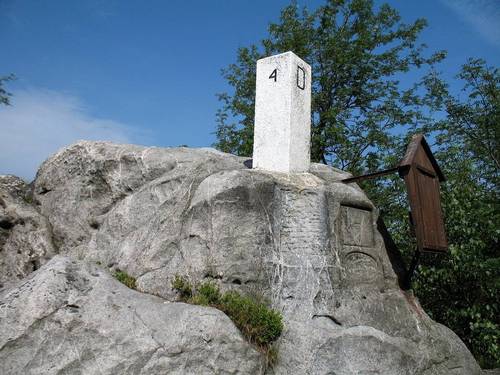 The way to Luz not miss significant rock formations triangle with a number of border pillar and engraved signs and dates. Turning to him is located approximately 300 meters crossroads Pod chickweed, footpath linking it to the mouth of the marked path at the junction with the tourist shelter. Continue along the border with Germany along beautiful ridge pathway. In winter the pathway changes to cross-country skiing trail. When we overcome final obstacles and little sweat we reach Luz.The view from the platform at the top is worth it! No wonder that here in the 19th century was even established tourist cottage with a lookout tower, but unfortunately in 1946, it burned to the ground.

After descending from Luz we reach the cottage bearing the same name. There we hit the green trail and continue to the sulfur spring. This source is unique for its chemical and bacterial composition that does not have anything to do with the sulfur! For rusty coating on submerged objects is responsible bacteria Leptothrix ochracea , which uses iron in the water to its own collection. 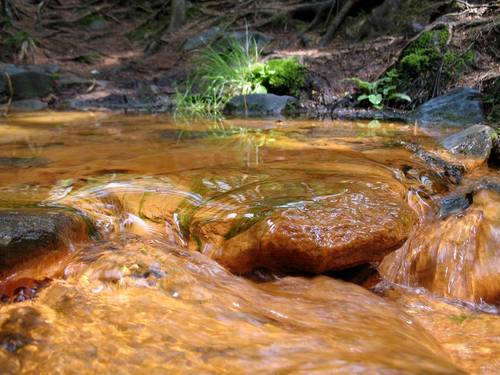 From the spring we get along the green trail to a nearby crossroads U Jana , where we follow the yellow signs up to the water construction called Nadaje on the Hamer creek . Water from the reservoir was originally used to drive a sawmill in nearby Hamr. Tank water is no longer used, so you can swim there if you are not afraid of cold water. Returning after our access road a few hundred yards back, we encounter a detour to the ice cave Nadeje. Although the cave is inaccessible, surely we can feel the omnipresent cold air blowing from behind bars at the entrance to the cave and vents in the debris field on a wooded hillside. 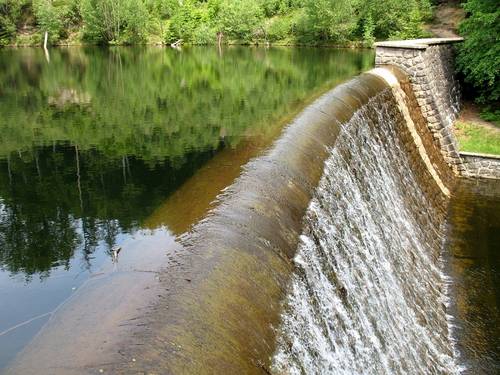 On our way along the red trail leading to Svor, w encounter one more interesting thing - the ruins of a medieval guardian castle Milstejn . The remains of the castle walls attract attention mainly for their unusual location in a sandstone massif. However, instead of fearless knights, local rocky terrain is conquered by climbers. There is no reason to spend time here if we don’t have climbing equipment. We have still about an hour to get to Svor and catch a train. There we end our 25 kilometer long trip across the Luzicke Mountains.