en.infoglobe.cz » CZ: Most – A Fate of One City III – Flying Church Part 2

Published: 24.3.2013
A troubled fate of Most, a city in the northern Bohemia, which vanished and was built again as a whole new metropolis however without any deeper connection to history of its predecessor that we known only from photos and documents as Old Most.

But there is one sight connecting those two periods of the city. As we know from previous parts of our voyage in the north Bohemia is a construction of the Church of  the Assumption of the Virgin Mary.

We also know from previous articles there were more than 10 different plans how to rescue the church, starting with undermining, dismantling or enforcing its structure and keeping the church on its original place. The last option, the only one that could be de facto realized, suggested to dismantle part of the church – from the historic perspective insignificant tower – and move the rest of priceless torso more than  800 meters further to the complex of the Holy Spirit hospital , the movement of monumental three-navy torso with late-Gothic arch. Two stone stairs are also a masterpiece let alone the 17centimeter altar from the years 1735-1739 made by Bartoloměj Eder. The author of the altar painting from 1773 is Josef Kramolín and his late-baroque works decorate many houses of God. 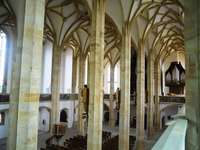 Preparations for the movement, establishing a depository and careful archiving of contents of the church already in 1970. In the following years there were several archeological exploration that followed by detailed geological exploration of conditions under the church on the way of its future movement. The track lead through long-dusted mine of the God’s blessing and not sufficient exploration could lead to catastrophe. Series of tests and adjustments ended in dismantle of the tower the value of which was not that significant after renovations in the beginning of the 20th century so it wouldn’t be worth it. The interior of the three-navy torso was strengthened by steel construction that grasped the church outside and inside as well so the weight of 9600 tons spread out together with concrete rim the weight raised to 12 000 tons! After this part of works it was necessary to move to the most difficult part – to built an independent track made of 160 meters of specially hardened rails. After every overcame part rails were dismantled and again laid down. It was done 5 times.

The church was put on 53 hydraulic carts that together with four load arms controlled the movement of the whole construction. The headquarters made of a glass booth was located right in the church from where endless system of hoses, cables, pistons and electromagnetic sensors the reaction of which controlled automated operations of the main computers that controlled the whole operations together with engineers. The plans for this operation took little less than five years. This unique “competiotion” of 841 meters could begin after terrain adjustments and strengthening bedrock at the place of final destination of the church were done.

On September 15 1975 the lifting and loading of the whole object began and on September 30 ten minutes to noon the whole object began to move, finally. A continuous 1,2 to 3,2 cm per minute was perhaps imperceptible at first sight however less than a month later, on October 27 at 9am the church was finally at its place… after 646 hours, i.e. 27 days of non-stop shifts, hard work and super concentration of every expert involved.

Subsequent rebuilt of the roof, tower and decorations of interior took almost 13 years, and in 1988 the church was again opened to the public.

It was interesting that movement of the church changed its orientation, its altar was no more directed to east but to south. It caused argues within the church and church didn’t want even to consencrate it. The consecration was done only in June 1993.

More information you can get when you visit the church and it is worth it!

A document with many technical details of difficult movement you can see here/a>.

The opening hours you can find here.