en.infoglobe.cz » CZ: Most – Fate of One City I, For Better Tomorrow

CZ: Most – Fate of One City I, For Better Tomorrow

Published: 10.3.2013
When you hear Most you think of not particularly enchanting north-Bohemian panorama of factory smokestacks, refineries, and areas of brown coal mining. Yes. That is how the northern part of our republic looks. But there are also many amazing and interesting thing and I am not afraid to say there is also some beauty there despite the fact search for it would take us little more time than in other, southern parts of the republic.

Of an uneasy life in the Krušné Mountains area I have written several times in the course of my work as an editor. Wheter it was in articles focused on nature, sights or environmental-protection leaning articles (despite the fact I am not particularly an eko-man). Today, we forget any pros or cons of the Krušné Mountains nature and we will focus on

a spiritual sight, i.e. technical. There are only few who never have heard of the Church of the Assumption of the Virgin Mary, literary a flying house of God that was literary lifted to avoid demolition that would be certain during the time of an extensive demolition of former Most. Lets take a look, at least briefly, at the history of this city.

The very first mentions of a settlement below current city we can find already in Chronica Boemorum from the 10th century. Its name Brux (Most in German) was chosen for it’s wooden bridges system that was built above swampy banks of the River Bílina. Now we are going to jump few centuries ahead to the beginning of the 1950s, the era of socialistic enthusiasm and development of all industries and a massive coal mining that put so deep wrinkles on the landscape that their lifting will need few more decades.

When talking about Most it is also good to remark

a catastrophe that happened in the city in 1895. Due to bedrock undermined by water a ground collapsed. In the night from 19th to 20th July ground waters got into a complex system of mines and caused gradual collapses of 25 houses during the following day in the city center. Overall, 236 families (1012) people plus lost their homes plus other 18 houses were heavily damaged. Another buildings were chapped and near collapse. This catastrophe affected 2462 people!

However, this kind of demolition was nothing compared to a complete demolition that was done as a result of development of city edges. In that time there were mined tens maybe hundreds millions tones of coal and ground. Old worker colonies were replaced by 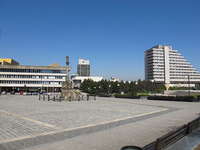 new housing estates, however, still planners didn’t think about demolition of original city district. In 1965 it was approved by earlier government resolution made on March 26 1964. It was approved that old districts of Most will be flatten to the ground, a similar fate of few smaller town in the northern Bohemia. Steelworks, brewer and china works eventually disappeared. The River Bílina was about to have a new concrete corridor, railways a new train station and workers new flats. Hill Šibeník was about to transform to a city park and a flooded spoil tip of the Benedikt Mine was about to be transformed to a recreation area. In 1965, demolition finally began. Excavators ended a long history of a place the value of which could be easily compared to the most popular sites in the the Czech Republic. However, dynamite didn’t study history and progress is well… progress. For better tomorrow more than 20 Gothic buildings were scarified, which is equal to the center of Prague! For example, a baroque monastery of Minorites, Romanesque church of St Wenceslas rebuilt in baroque style, or late-Gothic church of St Anna etc. Dozens works of art and architecture, statues and equipment, however, found their new home in other monasteries or churches close and far.

Since the beginning of the 1970s a whole new city emerged, it was in style of the then socialistic tradition of architectural brutality, i.e. reinforced concrete, wide avenues, panels and buildings called as “citizen facilities”. Prior and Rozvět shopping malls replaced cozy old shops and grocery shops. Comrades received a new house for their assemblies; working people got their Local House of Culture of Miners and Power Engineers. A whole new infrastructure emerged, new train station, a traffic corridor with several lanes, crossroads, new centers, hospital, dormitory, schools, a vocational schools and many other things that a city with 70 thousand inhabitants needs to its life…

The following part we will devote to one of the most important periods in the history of the city – a famous replacement of the Church of the Assumption of the Virgin Mary. This act is written in the Guiness Book of World Records.

More old photos of Most you can find here here

Do You Know That? The Highest Building In Czech Republic

Published: 17.7.2011
As far as the highest building of Czech Republic is concerned, it is no administrative building, hotel or some sender, but specially an industrial construction which is, by the way, our highest look out tower at the same time.

CZ, Most – Fate of One City II – Flying Church Part I

Published: 17.3.2013
Perhaps the greatest tourist attraction in the city of Most is, except for regular motorist events at local racing circuit, is a church the modern history of which is unprecedented.