Wooden and half-timbered houses used to be build in a line in the river valley. Until the 1950s, there used to be a half-timbered town hall. The prospectors built there Late-Gothic or Renaissance brick houses in the first half of the 16th century already. The town has still its original character. Our photos show you local landmark zone. 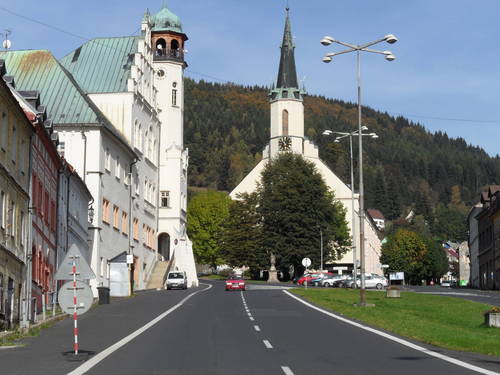 The oldest building is the All-Saints church originating in 1516. There are no religious masses, on the other hand you can have a tour there. Its original half-timbered structure, paneled roof, pavement, and roof frame painted in ox blood, have been preserved.

To explain: ox blood was often used to impregnated wooden parts of buildings. The first reason was the need to use the blood somehow. The second, to protect buildings – from woodworms, and moulds. The church has the original bell made by Hans Windt, the Jachymov’s bell maker. Also, there are tomb stones with baroque statues, paintings, and the altar of three parts made by Lucas Cranach senior.

As soon as 1531, the Slik’s residence was rebuilt to a town-hall. Inside, there the Information center for tourists. Observe the interior, and rooms roofed with barrel and groin vaults, and equipped with portals. 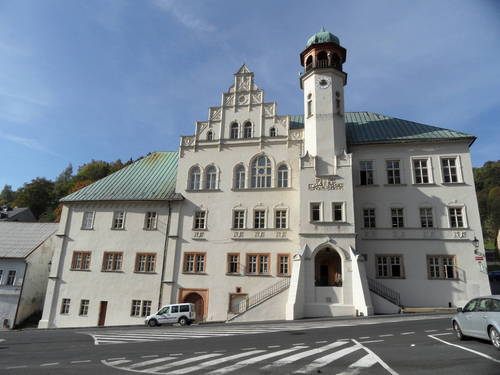 Adjacent to the town-hall is the most famous sight in the town resembling its former glory – the Royal Mint . This Renaissance structure has been preserved in its entirety, including a device to piping away smoke, or glass furnaces that remind of the times when coins were made in Jachymov. From the 16th century, silver tollars coined there, and the currency also later gave the name to today’s world currency- dollar. If you were to choose one museum in the region, choose this one which displays the history of the town, geology, mineralogy, minting, and spa industry.

Below the town hall, there are the most valuable houses along Namesti Republiky. For now, tourists cannot see interiors of these houses, and facades need to be renovated. Yet their shabbiness makes them impressive. The preservation of almost whole urban structure of the Renaissance mining structure has been accomplished. Even beautiful details are to be seen there

The 8.5 km long trail runs in the town’s surrounding. The trail’s name is „Jachymovske peklo “ (The Hell of Jachymov). The name reminds of recent history of working camps at uranium mines. In 1898, the Curies isolated radium from uraninite mined in Jachymov. Uranium bounded by it, was dug in very harsh conditions, especially in the

post-war period,  by exploiting the work of political prisoners.

When wandering in the surrounding you would encounter ruins of vanished town. One of them would be Popov. You have to follow the gren trail until you reach a basalt rock and couple of solitary memorial trees – lime and ash, that climbs over a rock wall. Stories of vanished settlements is a great thing here. Even the nearby settlement of Marianska has dark fate. There used to stand two churches, and a monastery of the Capuchin order. Today, only a few bits of the wall remained. It is on the road that goes through a recreation camp The statue of the Virgin Mary of Mariasorgu is a place of sanctuary. Its preservation has been rather miraculous and it is held by the church of St Jachym. Come and visit these mysterious places. Perhaps, the Mining and Culture Land of Jachymov will become a the part of the UNESCO’S World Heritage Site list .

Published: 23.1.2023
History of mining, and many letters to Baby Jesus written by the hand of kids as well as grown-ups.

Published: 10.12.2010
The town of Horní Blatná is placed not far from Karlovy Vary (Carlsbad), Region Karlovy Vary, in an altitude of 900 metres above sea level. Its historical nucleus belongs to most preserved towns of Iron Ore Mountains.