Our walkthrough begins at train station near Tivoli amusement park. We will leave home from there eventually. By going down H. C. Andersens Boulevard we r

each the town hall, our first stop. First, we pass the statue of Hans Christian Andersen. He is an integral part of Danish id

entity. In Copenhagen, there is a museum deoted to him. The architect who designed the town hall was Martin Nyrop. It was constructed in 1905. Like many other buildings in Scandinavia, this one is also constructed of red brick. The main feature of the town hall is the tower. It is 105 meters high. To get up you need to climb 298 steps. The most interesting part of the town hall is the World Clock. Jens Olsen built it for 27 years. It is a very peculiar mechanism which was put into operation only in 1955. It has many functions. One of them is the ability to predict the calnder for another 570 thousand years.

Behind the town hall, there is another attraction in the city. It is the longest pedestrian shopping zone in Europe. Strøget boulevard takes us to the oldest square of Gammeltorv. At first, you notice that houses around it are quite modern. However, there was a huge fire in 1795. Many houses burned down then. There is, however, the oldest building in the city on this sqaure and also a renaissance fountain constructed in 1670. The fountain was originaly designed to be a municipal wel. In the past, the square was an important place for city' s political life, law, and also one of two most important market places. Today, it is popular among tourists. 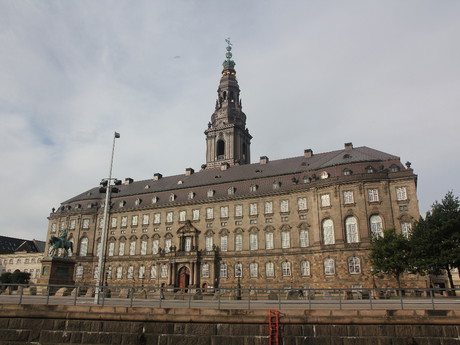 Our next stop is Christianborg, the royal palace. Today it houses Danish parliament and the government's office. Christianborg is built on Slotsholmen island (Island of Palaces). What you can see today is the third "look" of the palace. The two original buildings burned down in 1794 and 1884. After the first burn-down the royal family moved its residence to Amalienborg, a newly built palace. We walk through the first cortyard and move to the waterfront. There is the oldest Danish stock exchange. It is very easy to identify it. Its Dragon Tower consists of four intertwined dragon tails. 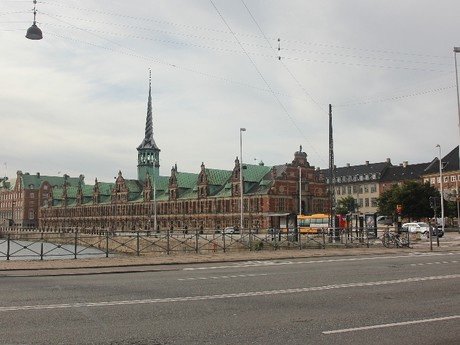 There many lures for tourists in Copenhagen. For instance the very interesting

the round tower of Rundetaarn. The tower was built in the 17th century and operated as astronomical observatory. The best vista over the city is from this very tower. The equestrian staircase which allowed horse riders to get up with their horses.

We also should mention Vor Frelsers Kirke tower. The

entrance is quit adventurous. You need to climb indoor staircase of the tower which gets you to outdoor staircase. Yes, there is a handrail  but it is mere one meter high. Only the thick-skinned can get to the top. However, it is worth the beautiful vistas over the city.

Yet we go on to Amalienborg palace. It is one of the major residences of the royal family. The royal family lives there mostly in winter. The four palaces bear names of former rulers – Christian VII, Christian VIII,, Frederik VIII and Christian IX. There is a beautiful square between the palaces. The guard wears long, hairy hats - the so called bearskins. By walking down Frederiksgade we reached the palaces. Marble Church is a beautiful addition to this street. There is the highest dome in Scandinavia. The construction of the church was very complicated. It started in 1749 and finished as late as 1894. 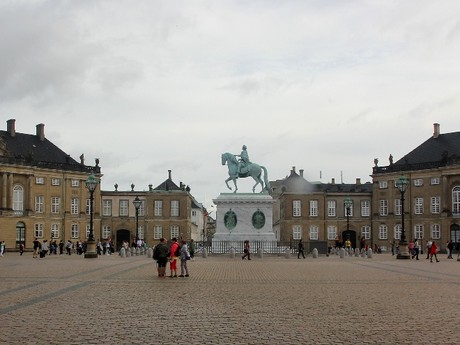 Near to Little Mermaid statue. It is the highlight of our afternoon tour in the city. Before that we saw Gefion Springwand fountain in Churchill park. They say it is the most beautiful par in the city. No need to contradict this claim. Geysers spout water high around goddess Gefiona and her team of oxes. The author was inspired by Danish mythology - Swedish King Gylfim promised to Goddess Gefiona that he would give her all land she manage to plow in one night. The goddess transformed her sons into oxes and she plowed really huge piece of land. However, she threw the land into the sea which created Vänern lake. 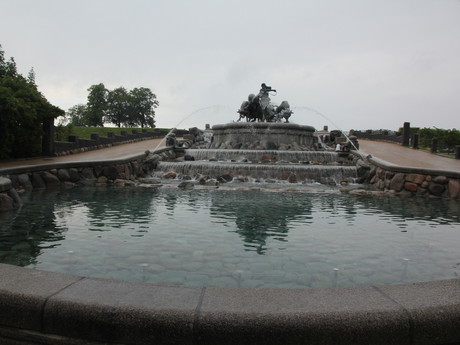 We being our tour in the city at Little Mermaid. But this starts next Saturday.