en.infoglobe.cz » Do You Know That? Austria: Achensee Lake - Pearl Of The Tyrolean Alps

In the coming weeks on our website you will encounter a number of articles mapping the ideal summer holiday trip in Austria and Italy, one of the stops will be the Tyrolean lake Achensee.

Lengthy trip to Italy through the Brenner Pass every traveler knows probably, but not many of them are excited from this journey to sunny beaches or the lake Lago di Garda. Therefore, it is good to find some sort of milestone over halfway into the foothills of the Alps and is just the Achensee.

About 80 km from Innsbruck to the international highway A12 exit located near the town Wiesing and it's the same exit as if you aim to ski to the valley of Zillertal. But we're going in the opposite direction to the north, where the path rises to the mountain switchbacks to the saddle, where you already see a narrow strip of the lake, clamped between steep mountain giants Rofan and Karwendel. You will be greeted in the inimitable spectacle shades of turquoise clear waters of the alpine treasure. Despite its relative proximity - less than 10 kilometres to the main corridor holidays, but this corner of Austria remains somewhat outside the main tourist interest of the masses. Because of its location and the profile reminds Achensee perhaps most Nordic fjords, only here it is after all only swim a little more comfortable, considering the fact that the local share would be water quality of drinking water. 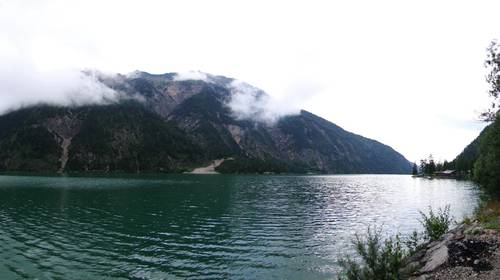 Achensee chooses the one who doesn’t want a not particularly special holidays, although ski resorts there are also several, among them such Pertisau, Maurach,

Achenkirch, Steinberg or Wiesing, which together form a small but comprehensive ski area for less demanding skiers, which is offered to 60 km of groomed slopes.

But happy could be also the followers of relaxing holiday, swimming, hiking and winter sports, especially running, which offers over 200 km of white track. Tourist signs, indicators and drawings routes are all marked with such precision that it practically get lost here, and if not, then certainly on its way you will discover another unforgettable view of the lake and its vicin

A popular pastime is vaporetto trip Wed Joseph, whose history dates back to the emperors Franz Joseph I. and Maximilian I., who Achensee popular as a place for their holidays. From the village to the lake Jenbach the seven-kilometre commute unique cog railway, surpassing elevation 440 meters!

If you are only passing through, or you stopped here en route to the South, maybe you will do as housing one of several local camps. We recommend camp site of Achensee Schwarzenau at the eastern shore of the lake in about half of which comes around and most photos in this article. Prices are similar to those in the rest of the Alps, about 25 to 29 Euros for two people, for a tent and a car.

More information about the Achensee you can get from our travel journey on our website during August 2012.

Published: 29.4.2017
The ski season is over and everybody looks forward to summer. Those who have the feeling like they could enjoy skiing more should visit the Alps in Austria. There are several glacier resorts with extended season or even all-year round operation.

Published: 10.3.2008
Winter season in this year is, however, too mild, and not too favourable for skiing. You have to look for the snow and skiing possibilities abroad where the conditions for your activities are more favouirable as in Czech Republic. This time, you travel to Hintertux skiing centre, 550 kms distant, on border of Austria and Italy.