en.infoglobe.cz » Do You Know That? Austria: Salzkammergut 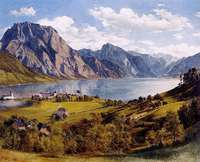 In the last episode, we finally said goodbye to our Alpine holiday, which for months was replaced our infinite series, subtitled: Do you know that?, that today is coming back to our portal and you will read it regularly every Sunday as you were used to do.

Today's article is indirectly linked to the already mentioned Alpentrip series, which part should originally be a stop in the vicinity of one of the most beautiful towns in Austria – Salzburg. The vicinity was meant surrounding area located just on the border triangle of Upper Austria, Styria and Salzburg just which end we only drove during the return to the Czech Republic. Due to inclement weather and lassitude of a long travel, we decided to visit the Salzkammergut region in some of the next opportunities. And what attracted us here? From the Alp part of Austria might not expect anything else than breathtaking natural scenery, flooding all shades of green and blue, which would perhaps be additionally painted to the Austrian flag, because summer Alps literally bursting with these colours.

On the most newsletters, auto maps or promotional materials of the Salzkam

mergut, a salt chamber, you can often find one recurring motif of the church tower, which, like the adjacent village crowded on the narrow side of the bank of one of considerable mountains. All this slightly kitschy fabulous scenery is enhanced reflection in the lake level, which also reflects the village and the surrounding mountains. IF you have this picture somewhere have ever seen, know that reality is perhaps even more impressive. Is sometimes inappropriate municipalities Hallstatt, over which lies the majestic mountains of the Dachstein.

Hallstatt was until the end of the 19th century virtually inaccessible villages, like the entire area of ​​the Salzkammergut. Austro-Hungarian authorities not authorize any movement of the population. Nobody is allowed without special permission to immigrate or move out. Who was born here, he is also mostly died. The town of Hallstatt was accessible only by boat, the first road it merged with the surrounding land, respectively spa town of Bad Ischl, until 1890. Today, together with its remarkable surroundings, is the part of the World Cultural and Natural Heritage.

Salzburg is also a land of lakes. There are more than 20 and those are the

best known are for example Attersee, Grundlsee, already mentioned Hallstätter See, Mondsee, Traunsee and we can´t forget the Wolfgangsee. By the main rivers linking the region, individual cities and some lakes are Traun and Ischl.

The symbol of this part of Austria became salt, or rather mining. Already in Celtic times, salt was mined and later exported around Europe. The word “chamber” in the title, however, not directly related to mining, but with the administrative division of the former imperial financial administration, the Chamber of Commerce.

Archaeological excavation, includes hundreds and thousands of graves with stone, clay and iron artefacts, confirmed the presence of the permanent settlement already in the 7th century BC, this historically significant period then received a Celtic settlement and naming the place the most fundamental findings, a Hallstatt period, roughly equivalent to the oldest Iron Age.

In the context of ancient times is necessary to realize that at that time, the area north of the Alps dark impenetrable forest, inhabited by semi-captive tribes of warriors, professing pagan deities at the time, when about almost 1000 kilometres more south honourable Romans elected their senators.

Today everything is different, almost. Italy, though still in vain elect their representatives with the prospect of better tomorrows, packs of semi-wild pagans are now more likely to occur in the East and around the centre of Brussels. However, a fundamental change occurred primarily in Salzburg. Here nobody foreign they force to escape, contrary. The all region is literally a paradise for tourists of all ages and interests, especially those active ones. So we have no choice and next year we have to come here to do at least a couple of trips ...

Published: 13.1.2013
The region of Hochkönig in Salzburg has everything every good skier desires to have. A fast ride on world cup slopes, three amusement parks only for the bravest and a 32 km long Royal circuit for skiers-epicures. Thanks to Advent events, to winter geocaching and various new features, this Austrian region promises an unforgettable experience for your winter holidays.

Published: 16.12.2012
Vacation in the Alps isn’t necessarily expensive. This proves an offer of vacations in Salzburg where you can enjoy ski slopes and cottages for the best possible price. Accommodation is available in beautiful hotels, on picturesque mountain farms or in large recreation cabins