Shacks, which locals call just Pomezky, today belong to few places not violated by tourism and they are still keeping their peaceful 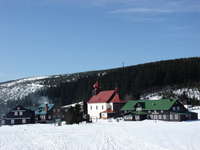 alpine villages in a picturesque valley of Malá Úpa that gave a name to several small and large settlements along the river stream. Horní Úpa and Pomezní boudy are the evidence of the fact tourists may be attracted even without a perspective of party hard nights, hunderds of meters of ski slopes and other temptations common for larger ski resorts. First settlers, who settled there on vast meadows already in the 16th century, probably didn’t imagine there would be several cottages, an infocenter and recently built ski resort. Vast forests located on hills were rich on quality lumber exported to the mines of Kutná Hora. This continued until ore and gold ore was discovered in local drifts. For several centuries the area of Úpa and Pomezní boudy was basically cut off from the rest of the world. Perhaps the most important event of a short history of Horní Úpa happened in 1779, in the year when future Emperor Joseph II slept over there. He was amazed by modesty, strong will and determination of local mountaineers. The Emperor promised he would help the settlement to flourish, to built a church, a cemetery or schools. 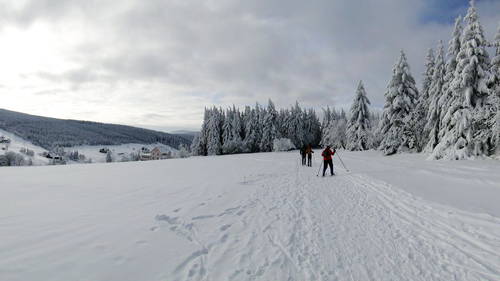 It is interesting that the company of future Emperor was General Laudon , a well-known figure of a folk song. They stayed in Mohorn’s Mill, after it burned down and was renovated it received a present name Spálený mlýn (Burned Mill). When a village has its church it has almost everything, well, at least a center. Only during post-war period, i.e. in the infamous year of 1948 the life of the village and its administration moved to Pomezní boudy. 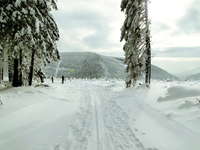 Pomezní boudy, located in 1050 meters above the sea level, are one of the most popular resorts in summer and even more in winter. A village located on Polish a Czech borders gives tourists a sufficient comfort during a whole year. You can find here everything. To begin with, there are places for bowling, wellness services, swimming pool, two ski rentals, few pensions and cottages with all sorts of names, and last but not least 8 mostly blue ski slopes, the latest offers one kilometer long downhill almost to the center of the village. Skiers would enjoy stay here, however, cross-country skiers as well. Generally it is sad that Krkonoše are not particularly good locality for cross-country skiing. It has high elevation differences, steep hills and crossing across ridges. However, these crossings are amazing for giving an opportunity 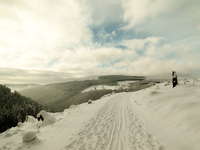 to see the valley hidden in shadow of Sněžka mountain. Pomezní boudy are probably the best starting point for trek to the highest mountain of the Czech Republic. It is worth visiting famous Jelenka (Jelení bouda) the last cottage before a long hike in east side. Anyway, back to cross-country skiers for whom there are several easy tracks, i.e. short tracks. It is best to use them for a half-day circuit suitable for skiers of all experiences except beginners. No doubt that Krkonoše are not Jizerské Mountains či Krušné Moutains but you wouldn’t be bothered skiing there. The peak of Sněžka is well-visible from any place there – a potential goal of the fittest.

Pomezní boudy and also Horní Úpa or Malá Úpa kept the image of classic alpine villages unlike other resort in eastern Krkonoše. These alpine villages are unlikely to disappoint your expectations. Perhaps the most popular landmark of the picturesque valley is the church of Peter and Paul built in 1788-1789, today the 4th highest located church in the Czech Republic …

Author’s note: Images, for illustration purposes, were made on a cross-country track between Pomezní boudy, Eliščino Valley and Horní Úpa in 2013. 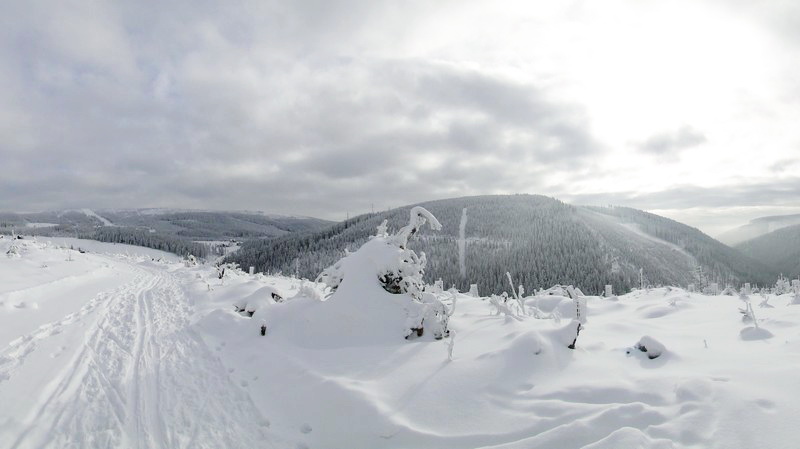