According to historical datas Baños has no founder nor foundation date. Simply put, it was gradually settled by Indians who came here. When the first Spaniards came here they called the settlement IPO (in the Puruhá language). Therefore, it is estimated that the origin of Baños could be found in the villages of native inhabitans Puruhá.

You can do all sorts of activities in the area – extreme sports like rafting, canyoning, paragliding, and bungee jumping. You can ride a horse or climb up a mountain. Next to  Baños Tungurahua volcano which is 5016 meters high. The volcano is called „El gigante negro“ and is considered one of the easiest-to-climb volcanoes of Ecuador. It has been active since 1999 so find out current information on its activity prior to your trip there. When it's active you can make a trip to observe and take pictures of the volcano spouting out lava. One can get alone to the top without being a part of organized group.  It is safe to say that all activities around Baños are possible only through a travel agency. 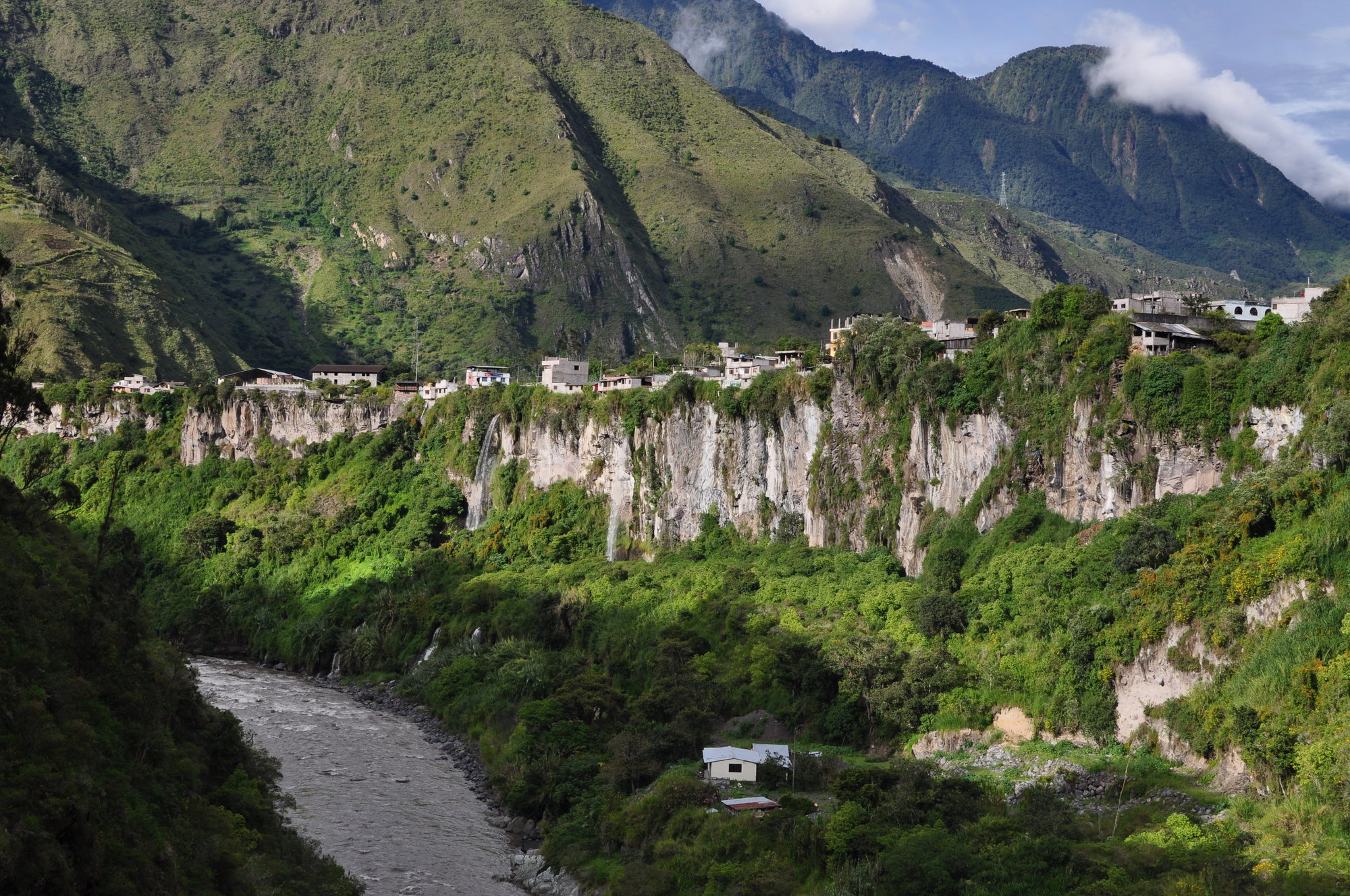 The city of Baños, home to about 20 thousand is situated at 1826 meters of altitude. You can make couple of easy treks in its surroundings. We go uphill to Mirador la Cruz Bellavista. There we enjoy a splendid vista over the city. Then we go further to  Mirador de la Virgen. Virgen del Rosario de Agua Santa is the holy patron of. The church was used as a shelter when Tungurahua volcano erupted. 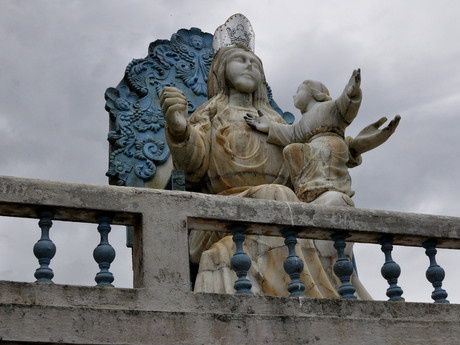 The road goes through thick forest. We spot a huge, hairy spider who is stunned by a huge blue wasp which tries to take it away. This is not the first time we have seen the wasp. It is some species of spider wasp which eats spiders. These live also in the Czech Republic. But here you would hardly see them carrying such a large spider to their nest. Here it's no surprise. After Baños there is the town of Puyo after which there is a jungle. 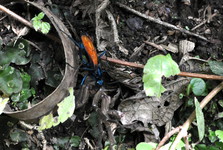 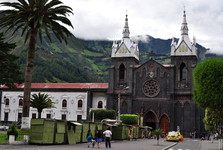 La Virgen is a scenic place from where you can see the entire city. But you need to go up a number of stairs first. We run down the stairs and visit local cemetery. Then we are headed to the city center. There are many waterfalls around the city.  Pailón del Diablo (about 30 minutes from the city) is a very popular place. If you rather stay close to the city, there is La Cascada de la Virgen near the city center. The city is also knwon for thermal springs in the area. These gave the city its name. The spas are close to the city center. Their water is usually of yellow color depending on which mineral is present in water. La Virge and Santa Ana are considered the most popular spa around. Many tourists travel to the city on weekends. So you'd better go there in work week. 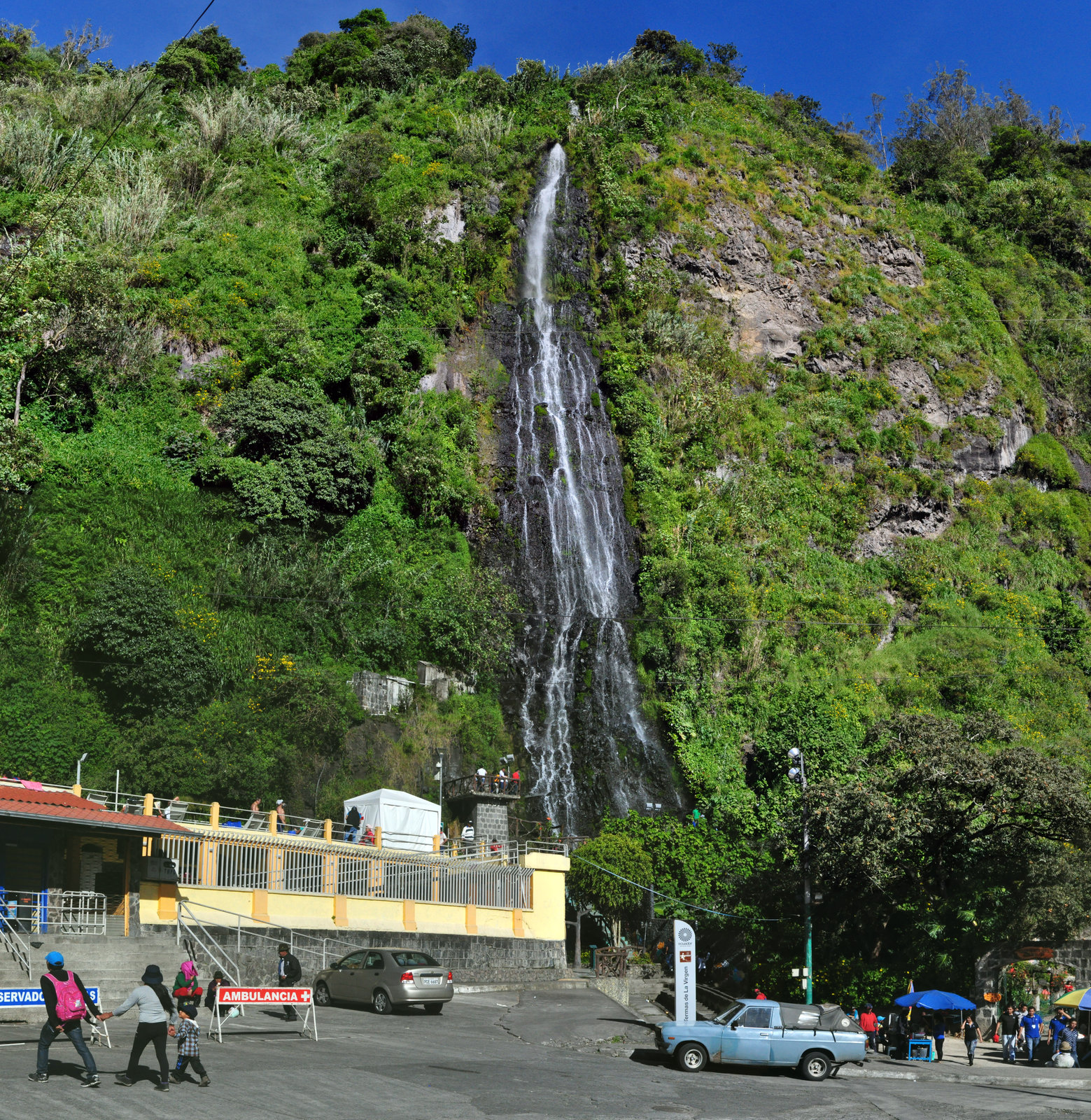 Apart from spas and waterfalls the city became famous for its melcochas, a sweet food. The main ingredient is water and panela (solidified cane juice). You will break your teeth while eating this candy. It comes even with nuts, allmonds, or has varous colors. Water and panela plus other ingrediends are cooked until it become sort of sweet dough which is knead while still warm.  Local candymakers have special hook at the door. They put the dough on the hook and then they stretch it and knead it till its done. Then they cut it or make some form of it and sell it. There are so many stand and so much candy! Moreover, you can buy there freshly sliced cane which can be yeasted. 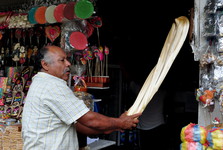 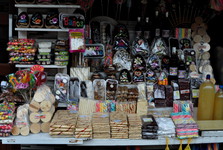 Baños could be an adrenaline as well as relax experience. We have rested there for several days. So no we can move on to the town of Riobamba.