First of all we take a look at the zone dedicated to the world largest country – Russia. Here, however, it is a scale model of the country yet it presents set pieces typical of Russia. There is an Orthodox church with gilded domes or rich wooden houses. Actors in traditional Russian folk costumes move around them. 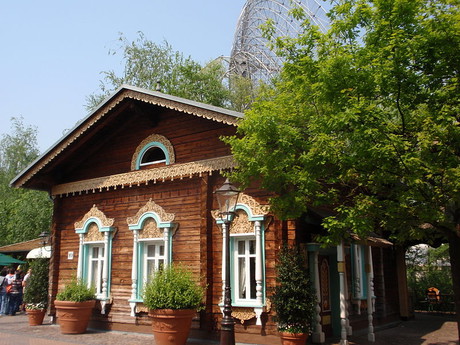 Should your feet hurt then you can sit on one of the carved benches. There is a wood workshop inside one of the wooden houses. You can try wood carving there. Perhaps you find your hidden talent there...

Also, Russia holds a model of the famous Mir orbital station. This model is a part of the Euro-Mir rollercoaster. It consists of five conical towers through and around which run the rails. Its design should simulate a trip into space and then re-entry to the Earth’s atmosphere. The length of Euro-Mir is 980 meters. The time of ride is around five minutes. The speed of carts is 80 km/h. 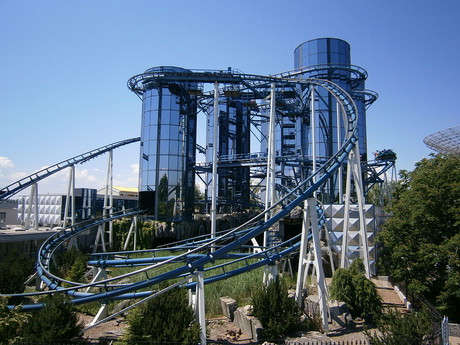 As we have started to talk about rollercoasters we leave Russia for France. Its houses in true French style could be easily mistaken for some houses in Paris, Marseille or other French cities. Also, you can encounter there one of the most important French historical figures – Joanne d’Arc. She sits on her mighty warhorse while wielding her sword. 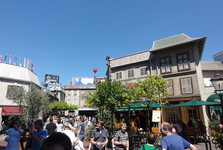 However, not only your eyes feast on France. Once you walk by 1920s style houses you will notice a sign saying Bistro. Go inside to have something delicious to eat. The restaurant 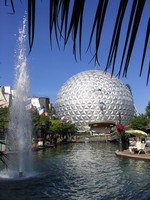 was even used as a film set several times.

But let’s see one of the most important things luring visitors to Europa-Park. It’s Eurosat. It is not a building per se. Rather, it is a huge geodetic dome holding a rollercoaster inside itě.

You cart flies in the speed of 60 km/h, spinning in the serpentines inside giant, silver dome. Every year at the end of October (on Halloween) a huge cloth is spread out making the dome look like a giant Halloween pumpkin. The name of the rollercoaster changes from Eurosat to, obviously, Pumpkin Coaster.

This is all of Europa-Park so far. Perhaps we return there at some point in the future.