If you spend your holiday on the coast of Warnemünde, Leuchtturm Lighthouse (Karl Friedrich Kerner, 1898) is one of the characteristic landmarks of the resort. Approximately 37 meters in height, the lighthouse can be seen almost everywhere in Warnemünde. Open to the public is from 10:00 to 19:00 from the end of April to the beginning of October. Inside the beacon there are spiral stairways leading to two balconies, overlooking the entire town, the promenade, the beach, the cliffs of the Stoltera, the Baltic Sea and the shipyards and a panorama of Rostock featuring the tower of the St. Peter's church. 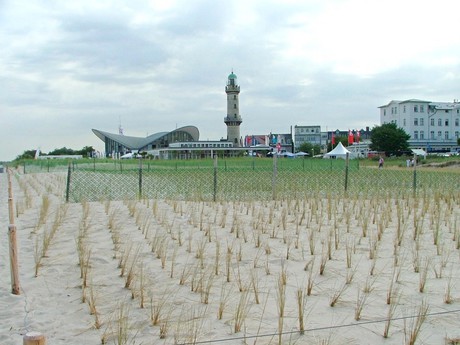 This lighthouse, as well as other smaller lighthouses on the coast show boats the wy to the port. At the foot of the lighthouse is a base with a golden sphere symbolizing the sun. Along the promenade to the Stolteraa cliff you will also see the individual planets of our solar system as well as the information boards, which together create a kind of astronomy nature trail. 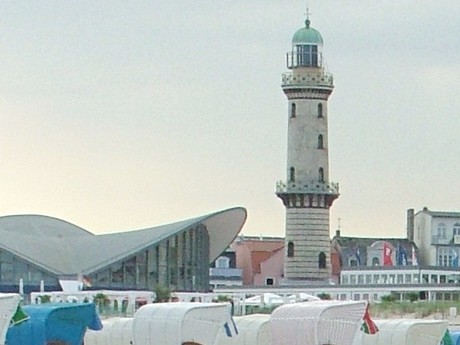 Right next to the lighthouse, the Seepromenade and the other dominant of the resort - Teepott (Ulrich Müther and Erich Kaufmann, 1968) are situated. This modern and architecturally interesting pavilion was named after the Teepavillon restaurant, which was here up to the year 1928. Today, the building has a restaurant, café, bar and stores. 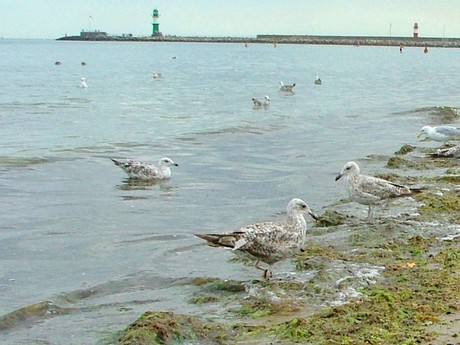 From here you can head north to enjoy a romantic stroll along Westmole's pier whic his over 500 meters long. The pier serves as a breakwater and also facilitates the arrival of arriving ships into the harbor. The poetry of the pier is illustrated by the old green beacon. From the east, this entrance to the harbor closes Ostmole Pier, where the old red beacon lighthouse to change. 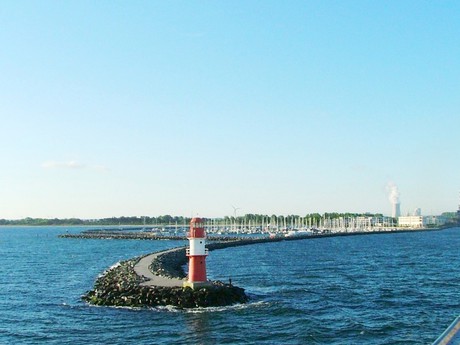 Towards the south you will reach the former fishing village, which will welcome you with a good tourist hike. This major tourist belt in Warnemünde is always full of tourists. In the center of the city there is a Neo-Gothic brick church (1866-1874) and old fishing houses are today shops, cafes and restaurants. You can also find stalls and refreshment markets where you can buy fresh fish and food prepared from them. The more you go south along Am Strom - a sought-after promenade along the western bank of the old Alter Strom canal - you arrive at a place which is quiet and peaceful. 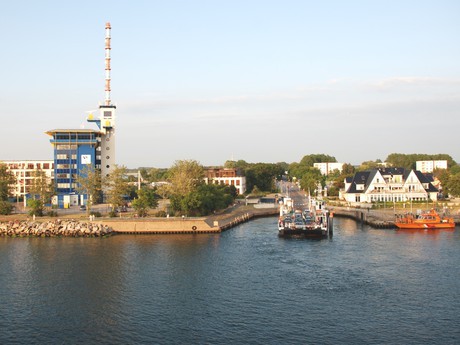 The Alter Strom is a water canal between the peninsula and the train station, the fishing village and the Warnemünde coast. It was built in 1423 and is fortified with bastions. By 1903, it was the only and most important approach from the Baltic Sea to the port of Rostock. Over 500 years, it was linked btween the Baltic Sea and the harbor of Rostock. 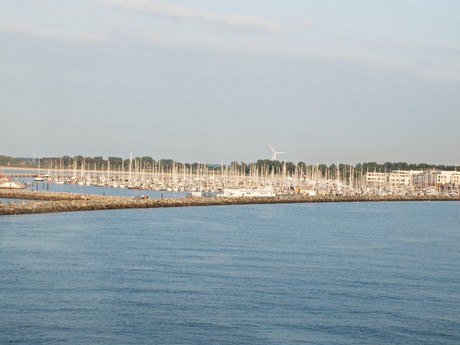 Other fishing boats, passenger boats, yachts and small sailboats sail in the waters of the Alte Strom, which create the seaside atmosphere of the place. On the other side, you can reach the Alte Brücke rotary bridge. The bridge with a clearance height of 1.8 meters opens only on special occasions such as the opening of the season around  May 1st. This technical monument leads from the center to a peninsula where the station and the Mittelmole pier with the fish market is located. On the other side of the peninsula is a modern yacht harbor with an extensive hotel complex and a cruise ship terminal. 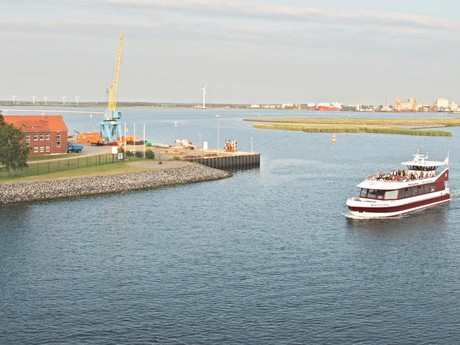 At Alte Strom you can buy a fishing trip or a guided tour of the harbor. The location of the water canal is the ideal starting point for cruises around the North and the Baltic Sea.

The town also lives through various events, the top of which is, in addition to the well-known Hanse Sail and Warnemünder Woche. These prestigious international yacht races, which last for nine days at the beginning of July, each year attract about 2,000 sailors from 30 countries and many visitors.

While there is a regatta at sea, Niege Ümgang - a colorful parade in historical costumes, takes place on the mainland. In addition, there are various beach parties or dragon boat races. Entertainment under the beacon, the beach and the Alter Tree will never end on these days.

The fresh sea air, the view of the beaches, the sea, the fishing villages and the significant Hanseatic city. This is what northern Germany offers. And this is which is worth visiting anytime of the year. So do not hesitate and go!