The palace was founded around the year 1900 BCE. Two hundred years later an earthquake demolished it. Soon after, another palace was constructed upon the ruins of the former – the second palace. People dwelled inside until 1450 BCE. Then the entire Minoan civilization was wiped out by a huge tidal wave. There are still some ruins to be seen. And most of the excavation works uncovered the second palace. In 1900, the Italian archeologist Frederico Halbherr uncovered the remains of the two palaces. Unlike Knossos, ruins here were not rebuilt. Rather, they were left in the state in which they were excavated. 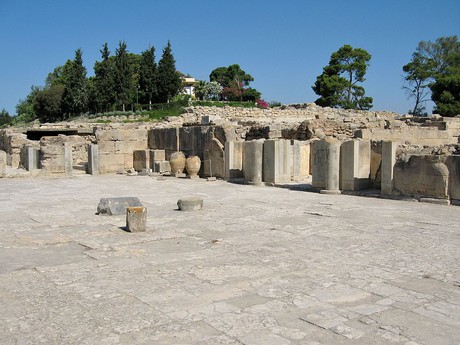 Once you enter the palace, the first thing to catch your attention is the 14-meter wide staircase with the total of 12 stairs going from the amphitheater and the western courtyard to the new palace to the left or the main courtyard to the right. The stairs are protuberant to look more impressive. This timeless architectonic feature was later adopted to Pantheon, Athenes. On main courtyard, there is beautiful view of the highest mountain of the Idi, i.e. Crete – Psiloritis (2 456 m). Sacred Minoan cave of Kamares is in its foothill. A collection of ceramic items was found there. Today the findings are displayed in the Archeological Museum, Heraklion. 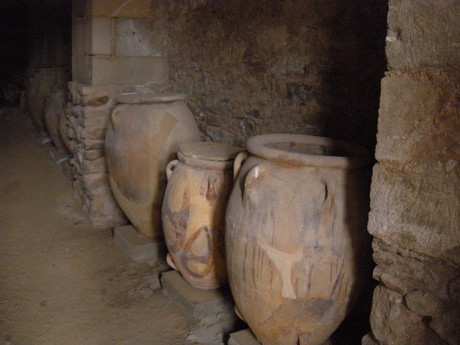 You can walk across the northern courtyard when going from the main courtyard. You can go to the royal chambers. These were walled for security reasons. Royal chambers consisted of separated of the king’s and queen’s chambers. Behind their chambers, there is a part of the palace called the archive. It was in 1903 when the famous Phaistos disc was discovered. It is a small clay plate with pictograms carved into it going in a spiral. It resembles Egyptian hieroglyphs. The plate originates between the years of 1700–1600 BCE. It is on display at the Archeology Museum, Heraklion . 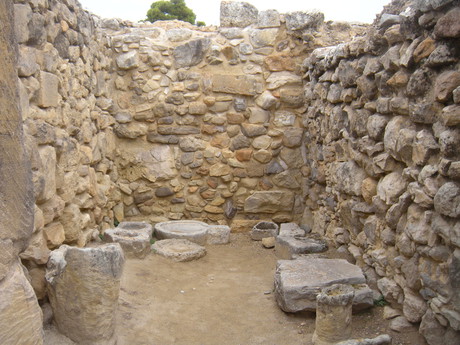 We walked through the entire compound. It took us about 1.5 of modest pace. There is an information board at every section. Therefore, there is no need to have a book guide. Once finished, we returned to our car. Right next to the car park, we discovered an abandoned church . It is far from spectacular at the first sight. But soon you unveil its magic. Even though it was closed we could see most of its interior from outside – old paintings, incense, and candles. In the past, masses must have taken place there. Today the church serves for storage. 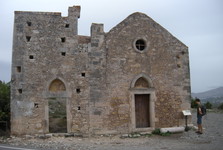 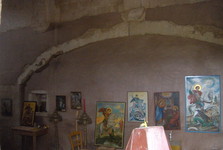 The next stop was the eastern part of the island. However, there was still a long way to go. We set off for Irapetra. As we said in previous parts of our series, there are not freeways on Crete. Therefore, it was a slow ride for us. We planned to spend night in a camp in the town of Koutsounari. It is about 7 kilometers away from Irapetra. The weather forecast had it it should rain that night. This led us to rent a cottage. It would spare us of packing wet tents. The price difference was very small. The weather forecast was right so we were glad to stay dry. The owner asked us where were we headed. She gave us some advice. We went to a restaurant for a dinner where they serve typical Cretan cuisine (I can recommend). It is right on the other side of the road. After dinner we took a stroll on the beach. It was windy, though which was why we slipped into our sleeping bags soon. 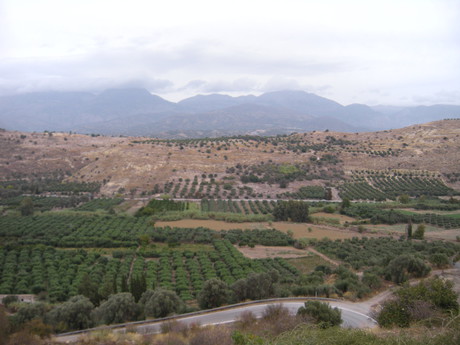 The story of how we discovered amazing places in the east of Crete is the matter for the next week.