en.infoglobe.cz » Greece, Crete – The Island of Landmarks, Mountains, and the Sea VII

However, this bad weather had something good in it. We were the only married couple on the entire compound. Unlike at Festos palace, here existed only one palace. It was between the years 1600 and 1450. Below the palace, there are buried remains of former settlement. It is unlikely though that these would be ever unveiled. This part of the island has been slowly sinking into the sea. 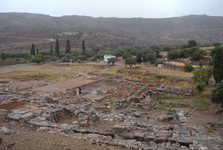 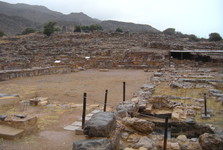 It is the place of invaluable value for many important findings were made there. Natives had only little time to flee from the massive tsunami wave which wiped out the entire Minoan civilization. Most of the findings are stored in the Archeological Museum, Sitia. The palace is quite small therefore it doesn’t take long before you are finished. The price of ticket (2.50 € per person) is adequate. There are couple of bars and taverns in the village as well as a nice beach. 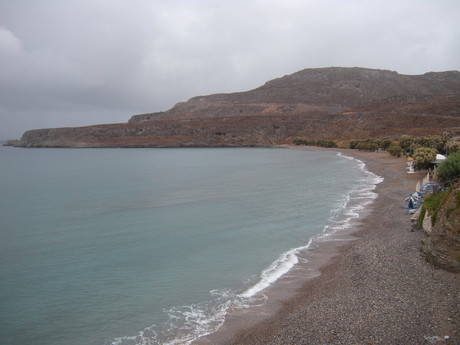 We decided to go on in the direction to the north to Palekastro village and then to Vai, a palm beach. It was a quick walkthrough through Palekastro. There is nothing to see though. Only a small museum displaying agricultural tools and equipment in old vitrines is worth of mention. Should you love to eat sweet pastry, make sure to visit local bakery. It is right next to the main square (sincerely recommended). 20 minutes of walk from the city in the direction to Chiona beach there is another excavation site free of charge. However, we missed it and went on to Vai, about 9 kilometers north of Palekastro. 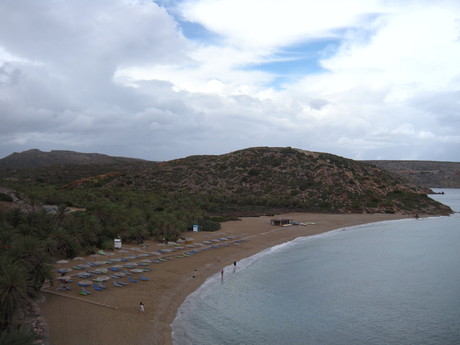 Sun rays greeted us after arriving at the beach. Immediately we set off for a walk along the coastline. True, Vai was not as impressive as a beach next to it behind rocky cliff. Vai is pretty much crowded as it is mentioned in every possible guide book. Therefore, we had followed the coastline further until we reached an abandoned beach, a nudist beach that is to say. Moreover, the rainbow which appeared above the sea made our impression even stronger. I can only recommend this beach before Vai and especially when you do not consider yourselves being a fan of crowded beaches. 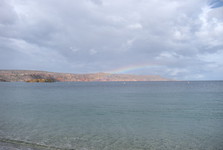 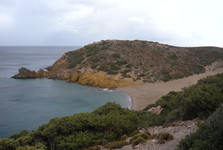 Despite we really did not want to get out of there, the time constraints required us to retreat into our last tented shelter. IT was a camp near Sissi town on the north coast of Crete. There is no camp closer than this one on the east of the island. By car, it takes about two hours to get there. The camp is right by the sea. When walking it takes about 15 minutes to reach the town. We spend the evening of our last day in a tavern and then we departure for Heraklion. Next week we tell you more about Knossos palace and the city of Heraklion.