en.infoglobe.cz » Greece, Crete – The Island of Sights, Mountains, and the Sea III

Balos is one of the most wonderful, one of the most beautiful beaches you can find on Crete. Beautiful lagoon is aright at its shores. Even people who don’t know how to swim can enjoy bathing there as water is shallow and at the same time crystal clear. Basically, you can walk your way to Tigani island. The island raises up 100 meters above the surrounding sea. Its name suggests its shape as it resembles a frying pan laying bottom up (Tigani means a frying pan in translation). There are basically two ways how you can get on the island. The first one is great for easy travellers and its includes a cruise from Kissamos. Usually, such cruises are for all day and they stop by on Gramvousa island and also you can visit a Venetian fortress which bears the same name . 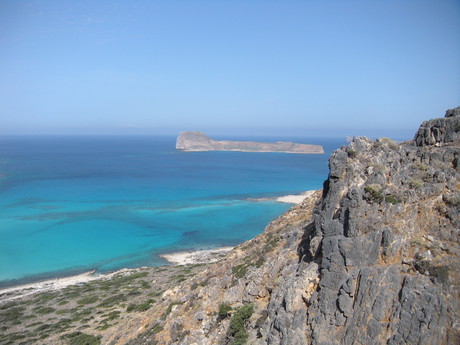 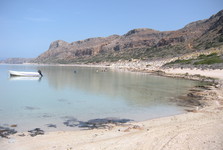 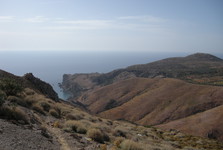 Another option was to drive by car along peninsula’s east coastline and then walk another 20 minutes towards the lagoon The road is pretty long and difficult yet there are beautiful views of the sea, the beach, and the lagoon. As we intended to have a bird’s eye view of the lagoon and for we did not want to be part of crowds of tourists we took the second option. And we did it even though the insurance did not cover roads that were not paved. I drove very very careful, I admit it. Goats surprised us along the road. They were far from being timid. Quite contrary they were very brash. They nudged tourists’ cars to be fed. 45 minutes later we arrived at the beach. It was truly rewarding to have the view of the lagoon, Tigani island and the sea. We felt like in paradise on the beach. Fortunately, there were not many people around. Therefore, we truly enjoyed it. 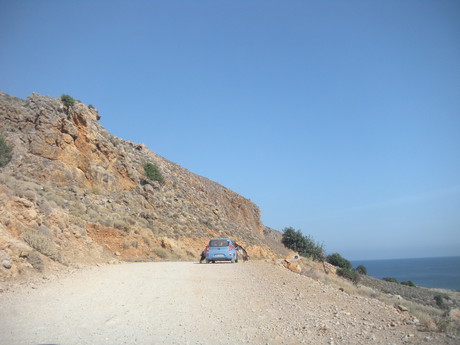 As we planned to see couple of things that day we had to leave Balos beach. Driving along west coast to the eco village of Milia. The village consists of couple of stone houses in the middle of mountainous landscape. Only a stone road goes there. The village was founded in the 17th century. Only shepherds lived there. Being so remote the village had been abandoned for a long time. In the 1980s the village was rebuilt to be self-sustainable. Tourists were enabled to go there and stay there for a while. The village itself has very peaceful atmosphere, the locals grow their on organic food, meditate, rest in the middle of beautiful nature. The village is small. 15-20 minutes is enough to see it. Be cautious to respect peace and quiet. These are the ground rules for every villager and visitor. 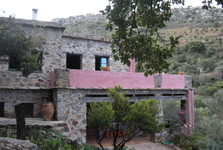 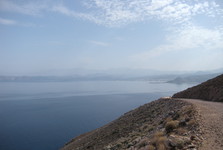 We moved Paleochora which is 30 kilometers away on Crete’s south coast in the evening. What we planned to do was to found us some accommodation on city’s eastern end. It would take us 20 minutes by walk to reach its center. However, there is not much to see expect the castle ruin from 1279. Usually, people travel there because of Pachia Ammos, a long sandy beach along the bay lining Paleochora. Nearby there is the pebble beach Chalikia. In the center, there are many shops and restaurants with guys standing in front of them trying to lure people in. However, having a tiring day behind us we enjoyed grilled veggies with crème. Then we walked on the beach listening to the sound of the sea. Thus, we ended our day. On the following day, we planned a day-long trip to Samaria, the longest gorge in Europe. Therefore, we hit the bed pretty early. 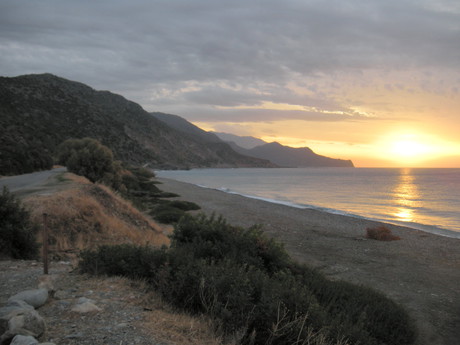 And what does the gorge actually look like? Well, you can find out next week.