en.infoglobe.cz » Greece, Crete – The Island of Sightseeing, Mountains and the Sea V

The monastery is on Crete’s south coast. It is one of the most popular tourist destinations. The monastery is orthodox. Monks still live there and take care of it. It costs only about 2.50 € to enter. Women must enter with their legs covered to not to disturb monks while they are meditating. Fortunately, you don’t have to have your of clothes with. A monk who sits at the entrance gladly offers you a skirt. 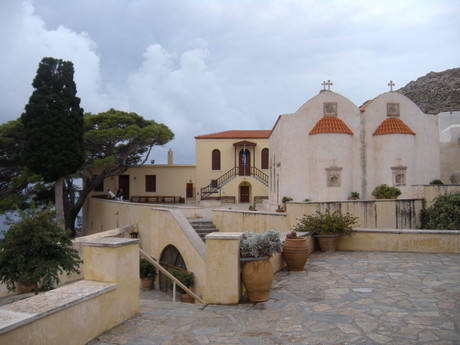 During the WWII the monastery became famous. The monks hid some of the Allied troops (mostly Australians). They got stuck on the shore of Crete after the battle of Crete. A sculpture of an abbot holding a rifle and a soldier, both in life-size, was erected here. The soldiers were evacuated eventually by submarine at Palm beach which is nearby. There is a small museum displaying religious items inside the monastery. There are also holy robes on display. A small animal farm is also at the monastery. Monks raise various animals, domesticated and wild as well. Except for this, there are cats running all around. We only peaked inside a small chapel and the museum while there, which was bit of disappointment for me. I expected monks to tell us more on the monastery and their life there. On the other hand, there is beautiful vista of the sea. We truly enjoyed it. 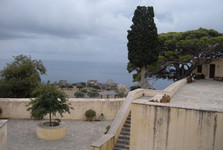 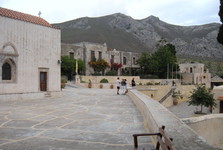 Once we returned to our car the rain starte pouring. We rode couple of kilometers down unpaved road to Palm beach . There we were waiting until the rain would stop. Half an hour later it really did. We explored the beach as every guide book talks about it. Often it is implied that tourists do not behave appropriately and throw garbage all around. However, we didn’t notice any garbage and there were really only several tourists hanging around. Yet the latter could be also be the result of unfavorable weather. 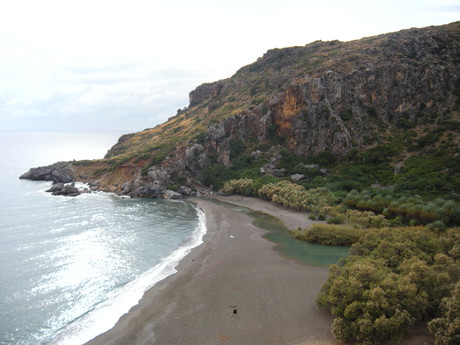 The beach is near the river’s mouth. The river flows from inside the gorge and the mouth of the river is lined with palms and oleanders. There is also a tavern where you can buy some basic snacks. Apart from German tourists and some swans no one was present there. Therefore, we felt free to explore the beauties of this fabulous nook on Crete. We intended to go further along the coast yet the trail turned uphill all of a sudden. This resulted in us ending up on sharp cliffs attacked by wild waves of the sea. 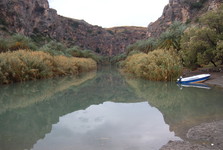 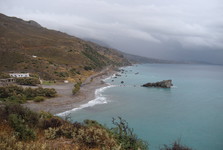 As it seemed it would rain, we returned to the car and left for Agia Galini, a town where we would spend the following night at local camp. It was really great there which makes me to recommend it even for you. It is a clean place and staff is friendly (it is a small family company). There is some great Greek cuisine to be tasted at local restaurant (again – meals are prepared by the camp owners). If you wish, you can even take a swim in a small pool there. 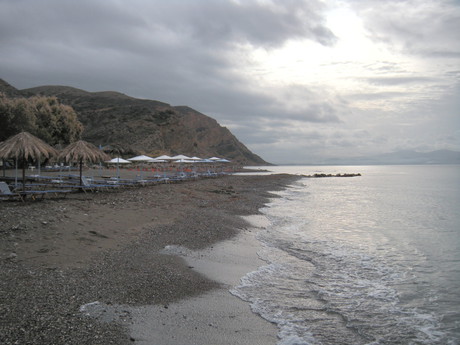 We took a stroll along the beach upon the dinner. There we listened to the sea. In the town, there is not much to see actually. Being a small fishermen’s village where you could see mostly Greek fishermen. It has become a tourist destination since where old houses were replaced by concrete hotels. Mostly tourists looking for entertainment at bars and restaurants are those who you can see on town’s streets.

Exhausted after a long day, we returned back to the camp and lay inside our sleeping bags. We were looking forward to the following day for we planned to visit (Faistos) – one of the most important palaces on Crete.

You can learn more in the following article coming next Monday.