This small town holds many surprises, a calm and tranquil health-resort atmosphere, where, in the middle of green, peace and relaxation predominate. In the centre surrounded by a park and a pond, various hotels and new buildings were constructed. Large apartment blocks were reconstructed in a style of past centuries and modern villas refurbished. However, even the crisis has affected these parts, many buildings are up for sale. 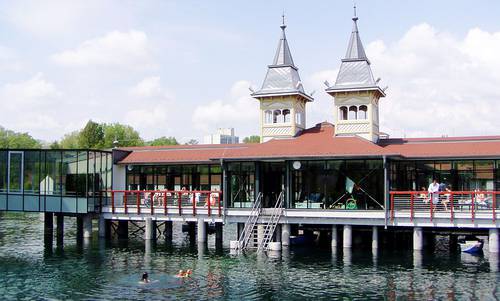 The thermal water lake is the unique attraction of Hévíz-spa. The temperature is consistently around 30° C. Allegedly, it is the only lake of such type in the whole Word where you can have a bath. Another interesting fact: the main part of this thermal bathing place, with its typical small towers, is constructed on columns. So, you can comfortably enter the water (where you can touch many pieces of dark-green leaves of water-lilies with white-violet flowers) up to its centre. The depth exceeds 30 metres, with a surface of rough peat-stratta and streams below the water-level which causes permanent change of hot water from the bottom and cooling from the surface. This thermal spring is so substantial that the water, placed around a surface of nearly five hectares, could be completely changed during 36 hours.

Moderately radioactive water, with high content of minerals, sulphur, iodine and another effective matters, can help heal the diseases of moving apparatus and rheaumatism, as well as many other health (sanitary) troubles. So, peaty wrappings as well as drinking water are being used for the treatment of the digestive tract. On the other hand, this procedure could cause some problems for those patients who have enervated heart, epileptic attacks, open wounds (injuries) and other contra-indications.

Despite the fact that the colonization of lake-environs is documented even from Roman time period, the spa tradition could be followed since the 17th century. Near the main park promenádě there are sycamores and flower-beds (named after Dr. Vilmos Schulhof) and recently refurbished old spa-houses. Inside the park you feel a total microclimate within the spa-valley, influenced by warm evaporations from the lake and green fauna.

Other tourist attractions worth mentioning are: the archaeological excavations of a Roman villa (at the end of Attila street). Close to this is Egregy-quarter (with its German name as Weinberg stated in tourist maps). The hills are covered with vineyards , surrounded by narrow streets of wine cellars, pubs and boarding houses. Here, home products such as various types of wine are offered (we tasted excellent types from local varieties known as the mysterious name of Cserszegi Fuszeres) and also brandy. Sausages and other local meat specialities are excellent. You can also find handicraft products and souvenirs.

If you prefer to leave the attractive “corporal pleasures“ behind to concentrate a bit on spiritual meditation, you could walk up along the Weinberg slope towards the old cemetery where a romantic small church from the late Romanesque period (13th century) is situated. The church is open for the public till late night hours. By the way, even a preserved tomb of a Roman soldier discovered during excavation works in the first half of 20th century, belongs to the attractions of this quarter. His remains are placed behind a glazed grate.

We visited Hévíz during last April weekend. So, the summer season was just open for public. Evening cultural programme in city centre as well as inside spa-park was dedicated to the so called retro-style. This nostalgic atmosphere of past centuries was strengthened with long clothes of women and elegant uniforms of men.

The friends who invited us to Hévíz, chose our accommodation - on base of good evaluation of internet web-site – in one typical building, named as Kaktusz Villa, and this fact was confirmed with balcony decoration. According to the information of the proprietor, the spa was visited in the past mostly by Germans. Presently, the hotels are full of tourists from Russian speaking countries and from Asia. This accommodation unit is frequently visited by Austrians and even by the Czechs and Slovaks. All these nations start to discover Hévíz and prefer small boarding houses, thanks to their typical family atmosphere.

A comfort on hotel-level of high category (such as: the rooms with air-condition) offer rather cheap services ( a night at EUR 9,- per one person), including many of additional services – i.e. relaxation in the garden, bbq or bicycle leasing. By the way, the environs of Hévíz and

the whole Balaton Lake is surrounded by a large number of cycling routes with interesting historical and nature attractions.

Golf buggies were available from our Kaktusz Villa, it took us reliably up the steep Weinberg Hill. A small small “tourist train“ is also going throughout the town, The other advantage of Kaktusz Villa is a possibility to visit the wellness centre situated in the four-star hotel NaturMed Carbona in the same street. The hotel can arrange special tariffs. 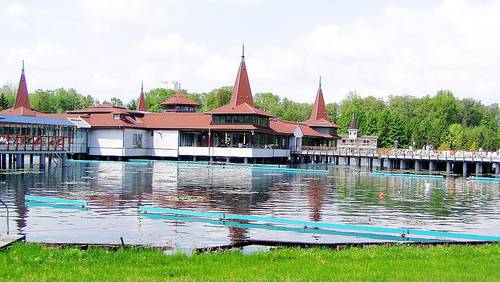 Directly inside the hotel complex is an indoor classical swimming-pool with sauna and small bathing place. This complex is equipped with water jets, at different heights, for a hot massage (water temperature is 36° C) for different parts of the body. There is also an outdoor bath with a water temperature of 30° C, very pleasant in the late evenings!

Hungary:Esztergom Is Not Only A Basilica

Published: 17.1.2011
Do you know which monuments are to be found in the town of Esztergom? You find there St Stephen Basilica, of course. But, irrespective of its exceptionality, the town can offer you another place of interest. You can easily see Slovakia, directly from Hungarian part!