The first stop is quite grim. The name of this place is Dimmuborgir (Dark Castles). It is a extensive area with many unusually shaped lava fields. You can find there many volcanic caves and rock formations. One of the most popular tourist destination (even though it is hard to assess it really when you walk wrapped in raincoat and it is constantly raining). This picturesque are awas formed by lava that leaked out more than two thousand years ago from the craters of Lúdentsborgir and Þrengslaborgir. There are many possible trails yet taking in mind the things said above we chose short walk to the Kirkjan cave, kirkjan meaning a church. After a short tour, we head back to the parking lode. The Icelanders believe that the place swarms with trolls and elves who live in the castles. It is a pity we did not encounter any. 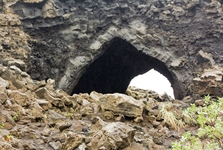 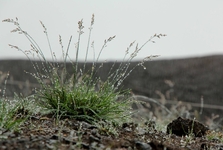 We have to refill our supplies again. To do this is suitable the town of Reykjahlíð. Many tourists head this way in the high season. They go around the lake of Mývatn. This town of 300 people has the church as the man landmark there. In 1729, there was a massive explosion of the nerby volcano of sopky Krafla. Massive lava stream stopped right in front of the church. Many believe that prayers were responsible for the miracle. Interesting lava tongues line the church until the present. They are evidence of the things that happened there. 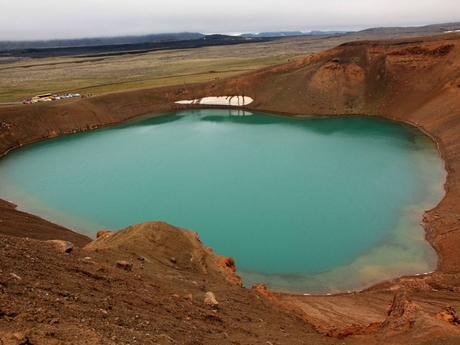 We bought everything so we are able to continue in our route for today. We are about to see Grótagjá – the most well-known flooded rifts. A friend, who was on Iceland couple of years ago, said we could swim in thermal lakes at the bottom of the rift. Two lakes were used to be accessible for tourists. A lake for women had water of 44 °C and a lake for men of 48 °C. Today there is a warning sign saying that the cave is accessible at one’s own peril. Walls crumble and pieces of rock are falling in the lakes. We hope that we will be successful elsewhere. 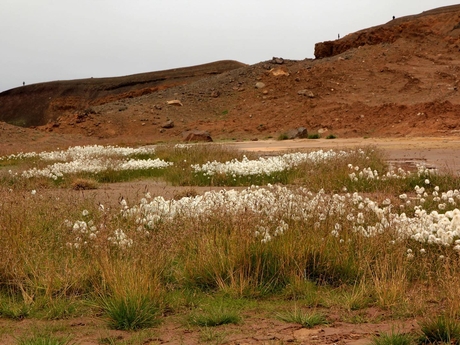 Ahead is a hike around the Hell – yes, this is the English translation of the name for Viti crater that is filled with emerald water. One is amazed by this color. A trail goes around the crater so you can view it from all angles. The views are wonderful. You will also see steaming airholes from which hot air will blow on you. Or there are sulfide fields that are interesting for their color and look. Some fight the temptation to take bit of sulfur with them. They do not realize that if they put it into the pocket the only result would be a burned-through pocket or destroyed clothes in worse case. 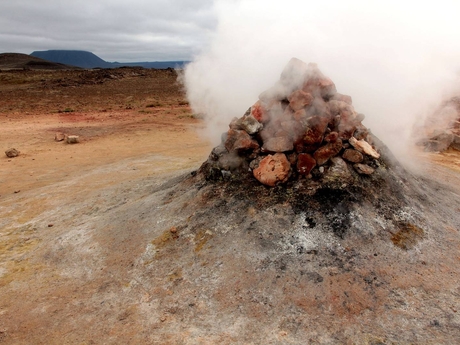 We continue on. Today we really saw some spectacular views and nature. We move to the opposite summit. This time we will visit a colorful rhyolite mountain. You will learn more next time …