Soon before nine o’clock we board the bus and go to the Höfði villa. In 1986, international meeting with the presidents of the U.S. Ronalda Reagana and the USSR Mikhail Gorbachev took place there. They signed a document to lower the number of nuclear weapons, hence contributed to the end of the Cold War. 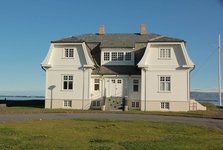 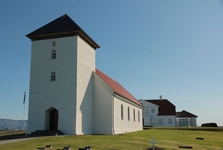 Another stop is the Iceland president residence - Bessastaðir. It is partially open to the visitor, yet you have to abide to some restrictions that are clearly visible. 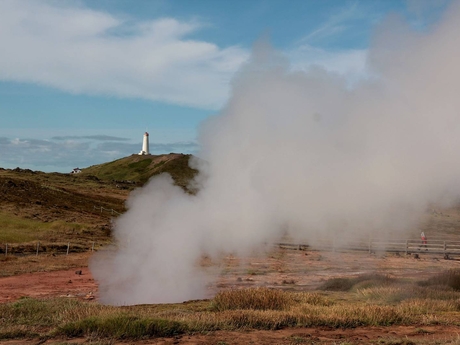 We leave Reykjavík and head to the geothermal area of Gunnuhver. Steam is going up everywhere. We follow many mud volcanoes, and fumaroles (a form of volcanic activity distinguishable by gas spreading into the environment). There were really many of both. The place was named after an angry woman spirit. 400 years ago she was captured there by a priest. The unique character of the place is due to the fact that 100% of underground water is actually sea water. Something like this is nowhere to be found on the island. Colorful minerals only multiply the uniqueness of the area. You have to really watch your steps there. The temperatures are reaching as high as to 300 °C (570 °F), which makes them the highest on entire Iceland. It is very essential to walk only on selected bridges and abide by every warning. I am very excided. Smoking volcanoes are really beautiful. It is true feast for ones eyes. 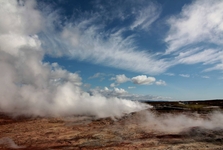 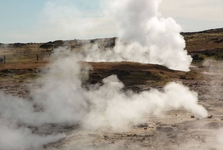 We continue on to the cliffs of Hafnarberg. From there, Greenland is only 1000 km away. The cliffs is home to ten thousands of birds, mostly seagulls and fulmars. The area is a bird reservation. Weather is really great. Soon we take off our clothes. First, we ascend to the lighthouse with a spectacular view.

Then we walk along the cliffs and watch the birds. The terrain is a dead lava field covered with moss, heather and other flowers. There is lot things to photograph. Unfortunately, we don’t have enough time to enjoy the nature. We have to reach edge of the cliffs and get back to the bus. We get there at 1 o’clock. The view of the sea is great, and the cliffs are photogenic. However, there are not many birds. It is possible the best time to watch them is either early in the morning or late afternoon when they return home from hunting. Now we have to stop and sit down for couple of moments to enjoy the beauty around. 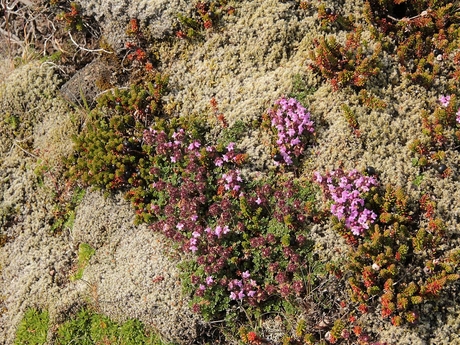 I want badly to get up to the top of Valahnúkur. First it seems that I wouldn’t mange. Fortunately, later, I learn that the departure ha been postponed for a while so lets get to the top! The cliff is a popular tourist place. In 1878, the very first Icelandic lighthouse was built there. In 1905, an earthquake damaged this rock formation and it seemed the lighthouse collapse to the sea. Therefore, it was disassembled and built bit further on the hill of Bæjarfell. We were there before. The said cliffs are of tuft (it is a rock that came out of volcanic ashes, and condensed into various shapes). For a while, I enjoy great views and than the return and departure. 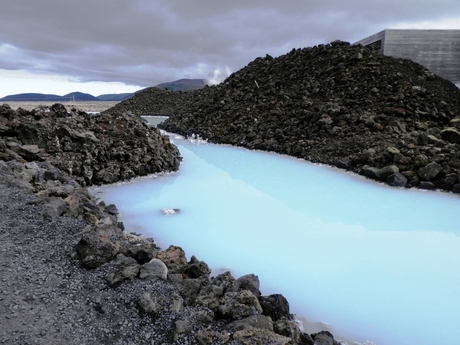 The evening program was very tempting - a visit to the Blue Lagoon – famous thermal spa. The admission is really really costy – 6400 ISK = 40 EUR. Yet it is worth the money. You cant swim there much as the pool is pretty shallow. There is lot of white mud at the bottom. Allegedly, it has healing effects. You can also put it on your face – and get younger! Blue Lagoon is the product of people. It was put among black lava blocks. With blue water the place looks spectacular. A thermal spring from geothermal power plant Svartsengi gives its power. Great relax awaits for you in the water of pleasant 38 °C. The lagoon also hides many caves, and great places to relax. There is also a sauna, a shop where you can buy silver colored mud in all variations. It will ensure your beauty forever. Going back to the camp. 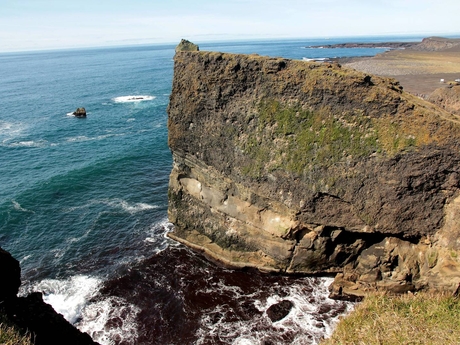 Next time we will take you to the highest waterfall on the island.