We start our tour at visitors’ center. We can hear to some video clips there which inform us on the history of Þingvellir. From there we follow the canyon of Almannagjá down to the flagpole. It is not certain if there the famous assemblies took place but it is very likely. The road follows the Öxará River until we reach a twenty meters high waterfall of similar name sounding Öxarárfoss. 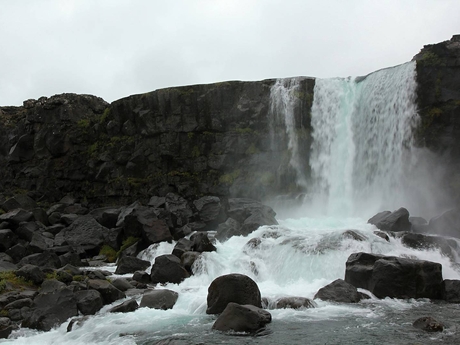 The river bends to the church and than disappears in the lake. .Somewhere I read that the lakes below the waterfall were used to drowning executions for women convicted for witchery, or sexual offenses. We go to the valley then, cross the Öxará River, and continue further to the picturesque and very clear lake of wishes called Peningagjá. Many visitors throw coins there and believe their secret wishes will come true. Near the lake, you can visit a unique church dating to 1859. Farm facilities neighbor the church. Today the buildings operate as a school, and a home of the verger, he is a manager of the park. 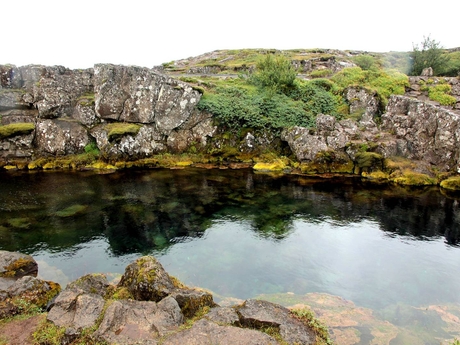 Icelandic chieftans accepted Nordic law in 930, in the same year they had the very first General Assembly at Þingvellir. Alþingi met every two years for two weeks, attendance was obligatory. However, chiftans met voluntarily, and they wanted to solve disputes, and made statehood better. The assembly was coordinated by someone who explained the law, and the laws were accepted by the Legislative Counsel. Acceptance of christianity was a great success. Alþingi lost its importance in the 13th century. The law interpreter function was canceled, the courts had no legislative power. The last assembly took place in 1798. Despite that the place kept its importance even in the 20th century. On July 17, 1944on independence on na Denmark and the birth of the Republic of Iceland were declared here. 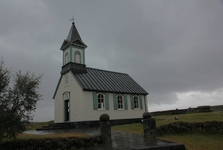 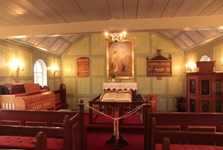 We would have enjoyed the trip better if there had been sun. This time there was none, and we had to have raincoats during whole trip. There is an interesting atmosphere. 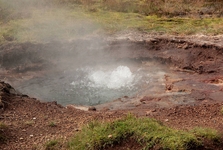 We are heading to Geysir. Hot springs of Geysiru is easy to notice from afar as they often explode. Clouds of steam raise to the sky leading you to this attraction. The area has been active for thousands of year yet the places of springs change, depending on geological joints. The scientist debate over what actually causes the explosions. And no explanation is certain. The temperature of underground water reaches eve 125 °C. Here you also have to pay close attention to your surroundings, and keep on marked trails. The greatest tourist attraction is Geysir itself. during high activity the water can reach up to 70 meters. However, it hasn’t been active for dozens of years. Moderate activity was recorded after a 2008 earthquake. Visitors tend to focus their attention rather to the neighboring geyser of Strokkur. The water stream reaches 30 meters of height every couple of minutes. It is very interesting to watch the process preceding the explosion – at first, some kind of bubble appears on the lake. It expands until burst, and a large stream of water gushes out. 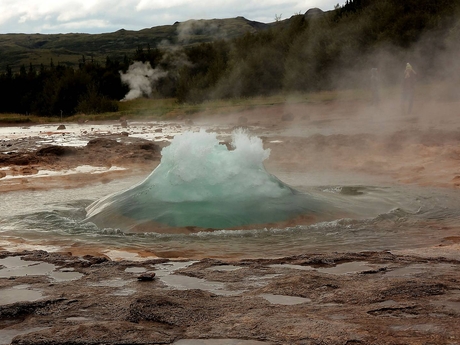 Řeka Hvítá nás poté doprovází k 6 km vzdálenému vodopádu Gullfoss. Golden waterfall will surprise you with its monumental character, and you will sea many rainbows under sunshine. We enjoyed this luck. Clouds dispersed and sun rays illuminated this scene of nature. The canyon is 2 km long set into basalt rock. The waterfall has an interesting shape, it isactually a double waterfall. The first cataract is ten meters long, and suddenly it refracts under 90° angle. Then its steeply falls into the canyon’s bottom. In the summer time, a well-accessible road follows the waterfall. You can enjoy the water while on the trail. The waterfall is a favorite place for photographers who have numerous opportunities to capture this nature phenomenna. 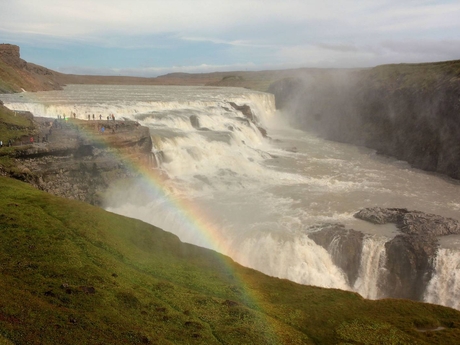 Our last stop today is athe residence of Icelandic bishops - Skálholt. The church had been the residence of diocese since 1056 AD. Later a wooden cathedral was built, the finance to construct it were collected from land yealds. For long years, Skálholt was a center of education. Unfortunately, a large earthquake hit the area in the 18th century. After, the bishop moved the residence to Reykjavík. The church was renovated and sanctified in 1963. Even this place belongs to the history of this Nordic country, and is worth visiting. 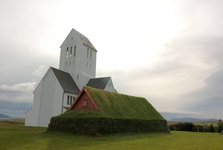 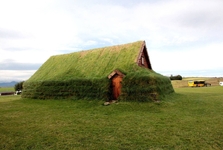 This concludes our day program, and whe just have to get into the new camp. We will accommodate at the place called Hveragerði. 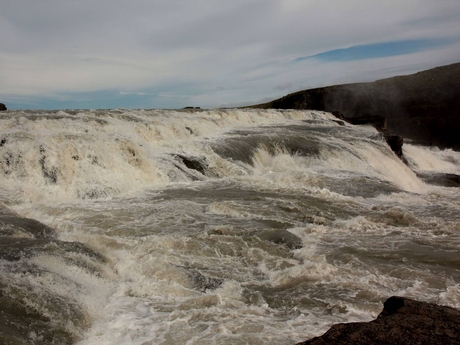 Next time I take you to the waterfall of Seljalandsfoss and to Vestman islands.