And just these three places present Iceland in its concentrated form, especially for those, who are ready to spend there several hours only. For the other persons, these localities could present huge introduction for a visit of wild Iceland countryside.

Ingvellir - Bureaucrats in the Nature

The Ingvellir National Park, one of UNESCO Monuments, is situated in distance of 23 kilometres, in east direction from Reykjavik, at the coast of Ingvallavatn, the greatest Iceland lake. Since 930, the first democratic Parliament of the world met there once a year. The assembly of the first Iceland inhabitants decided there new laws, marriages or state religion. 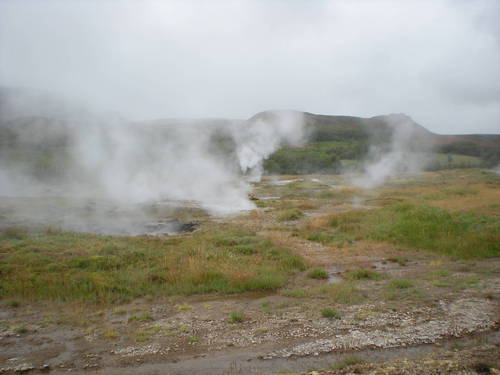 And, frankly speaking, the most dramatic scenery could not be chosen to such acts. You can note that the frontiers between North-American and Euro-Asian tectonic plate pass there, dividing from each other with a speed relating to 1-18 mm in a year. Thanks to this phenomenon, the countryside is furrowed with cracks and clefts. Oxara-river, flowing through, is drawing the scenery with several waterfalls. The rests of houses remained after members of Parliament session. So, small church and several houses are hidden at lake banks, including the office of Park administrator and you can find there also surprisingly a seat of Iceland Prime Minister. This place preserves its magic atmosphere in the course of whatever weather, especially when the visitor takes a view from rock tops, where the biggest Almannagja cleft is placed, imagining Viking speakers, discussing with a group of his fellows. All information regarding Earth motion and regarding Parliament decisions could be presented by Multimedial Centre and information plates, placed omnipresently.

In eastern direction, passing throughout extensive Iceland´s plateaux, full of horses and sheep, an area of geo-thermal activity could be found. In past, a Geysir became a main star there (all remaining geysirs of the world got the name according to this one). Till 1950, the geysir exploded the boiling water up to the height of 80 metres. However, the unpatient tourists threw down the stones, when the stream was completely blocked. Since that time period, the earth trembled several times in this area, and Geysir woke up from the sleep several times. So, it is possible that some future earthquakes could revive the geysir. But the Strokkur, his neighbour, does not disappoint the visitors, for sure. 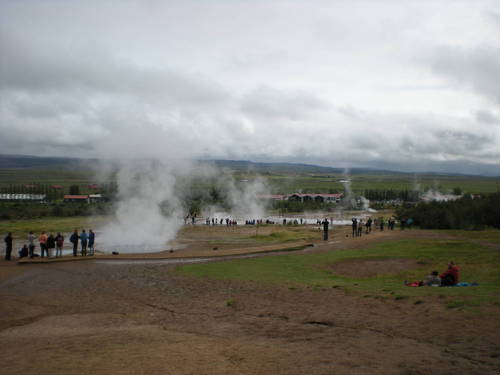 The water is rolling over lazy, the level is incerasing and dropping, and all seems as if Strokkur tinted to the action, to let out, every five minutes, in the air, powerful water column. In the whole area, the clouds of sulphured smoke are appearing, whereas the water is widely bubbling and sputtering in cracks, and some lakes are dazzled with its turquoise blue colour shade. Even omnipresent groups of visitors could not spoil the first moment of surprise, when nearly 30 -metres high stream of water flies out just in front of you. Nevertheless, this spectacle could be enjoyed even alone, as, for instance, early morning, after a night, spent in near hotel or camp.

The last stop during your circular drive across most famous and popular Iceland´s localities, is situated not far from geysir area. It is gigantic Gullfoss Waterfall. The clouds of steam and water drifts are hovering above the horizon, despite the fact that the river, creating this waterfall, flows throughout deep canyon. The water falls down across two stages into the depth of 32 metres, and coloured rainbows are vaulting above, in the course of sunny weather. 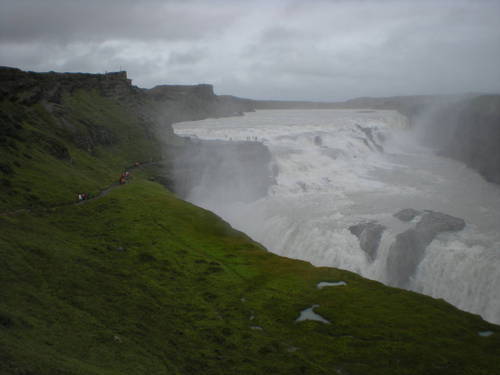 One way leads just towards foamed water, the second one is winding along cliffs above the canyon. So, you have the chance to have a look at such nature wonder from all angles, despite the fact that the visitors could not avoid the ice shower of water drops. Anyway, this most famous Iceland´s waterfall could be totally destroyed. In 1920, the group of investors decided to bar the river, where this wonder was placed. The real estate proprietor did not agreed to this action. It was good luck that necessary financial means were not gathered for such project, and we can admire the waterfall activity till now. Since 1975, the area was declared as nature reservation, and became a state property.