Published: 1.3.2008
Who desires the adventure and solitude and does not like warm weather, he could participate the action, which belongs to most difficult outdoor races on the earth. So, would you start thousand miles long route through Alaska. Anyway, you cannot expect a wealth and fame at the end of this action, but, on the contrary, self-knowledge and warm!

Jan Kopka, winner of this race of last year, (which started couple of days ago) is able to tell you more: he overcame on bicycle the route long 1800 kms (1100 miles). This race is possible to be overcome on foot, ski or bicycle further 350 kms, if it is not enough for experienced sportsmen. Anyway, credo of similar races is notorious fact: a winner is everybody who finishe

s the race or survives. In most difficult race of planet it is valid twice (in race of last year the competition was finished by two participants only, in spite of the fact that over 40 men started!) The route of „trail“ copies the routes of traditional races of dog-teams, very popular in Alaska. So, the race received its name – „Iditarod Trail Invitation“.

Biker from Jablonec adds: „No victory is to be mentioned, the target was to survive!“ The distance from Anchorage to Nome he overcame alone within 23 days, 2 hours and 42 minutes. Who would like to go the similar way, he has to calculate with a frost of -40 degrees and with hard wind, exceeding mostly 100 kms in an hour. We have to take into consideration that, according to the rules, the runner could take with the things he is able alone to carry. There is no place for useless things. The main subjects are: proved and light sleeping bag, suitable in extrem conditions, a little of food, one (or two) supplementary tricots and two pair of socks. „ As to other remaining things, I let it sent to several villages along the route, before the race“ explains Kopka a way, how to relieve some kilos of weight. However, you have to calculate with sections, where you do not meet anybody in a section of 300 kilometres.

Provided you would like to move your body in North of American continent, you cannot underestimate longterm physical preparation and couple of advice which could save your life. Below, you find survey of things, prepared for the race by extreme cyclist (at present, he tests new models of snow-bicycles on Lapland plains).

According to the experience of traditional participants, John chose food rich on fat and sugar. He ate fat cheeses, meat tins, turkey lunchmeat and sweets. He took with – as a readiness – 6 litres of  liquids, two connected three-litres camelbags, both in knapsack under anorak. He chewed frozen pieces of meat, (however, food prepared in such a way has no taste), in general, he ate an ice. He let to sent two packets containing food to two control points. Nutrend had prepared for him complete menu, however, it could not be maintained, under such extremely conditions.

In general, light dressing was for John during the race sufficient, similar to those as used for ski-runs, in spite of the fact that there was frost with more than -30 degrees Celsius. Thanks to windstooper and movement, he did not felt cold, a membrane protected him from frozen wind.

The organisers controlled strictly the outfit details. Most important is oil-stove (gas-cooker). It is not so important for food-preparation but from other reason. You can fall down and break something, so the cooker helps to survive, to warm and wait for help. To emergency outfit belongs also cotton-wool filled in fire-liquid and a lighter, for such a case, when there was a need to light fire.

Nevertheless, everything depends on a fact, how the biker adapts to local conditions. It is necessary to learn a lot of things. For instance, snow has a surface tension, in case it is too deep and the bicycle is crumbeling, keeps and it is possible to drive along. However, the other drivers, who follow you, cannot continue the trace at all.

The other important rule: all things would be available before dusk! In a moment, when the sky grows dark and the temperature gets quickly colder, it is too late to look for your forehead-lighting, subjects for sleeping or some dress or food.

Anyway, the most used subject for John, was a small cyclo-pump. Snow-drive is always influenced with tyre-press. John gave the air-or pumped the air to cycle-wheels-several times within a while- as he found an optimum state, in order to be ablel to continue ahead. Sometimes, his cycle-wheels were empty, sudenly changed everything, two blowing were sufficient, and all was O.K.

The race-participants can use a map but they are obliged to get it by themselves, the organiser does not secure it. John has a map and a compass. Some racer declared that he n

eeded no map, no compass, no GPS and always runs without using it. It is true, the map does not help a lot, but it is psychological support. Theoretically, the racer can drive where-ever he wishes, but, frankly speaking, it exist main way only. There are other traces, made by hunters and local people. Some of them lead to log-cabins, where you can stop in emergency cases and survive freezing night. Maybe, there are available here wood for making a fire as well as some food, too. This system of emergency overnight-possibilites in open log. Cabins is quite usual in similar areas of civilizing world.

Anyway, during orientation on route you have to pay attention to signs, there are often triangles from boughs varnished by reflex colours, but it is possible to orientate according to dogs´droppings teams went along before you.

-         all outfits (dressing, sleeping bag, gas cooker, etc.) have to be taken with by participants

from start to finish in Mc Grath.

-         any  planned way can be chosen but advanced stated control points cannot be missed.

scooters or by plane) are not allowed.

This covers – moreover sending of bags with foodstuffs (max 5 kgs) to Iditarod or Cripple.

Transport of further bags after Mc Grath depends on responsability of each participant. 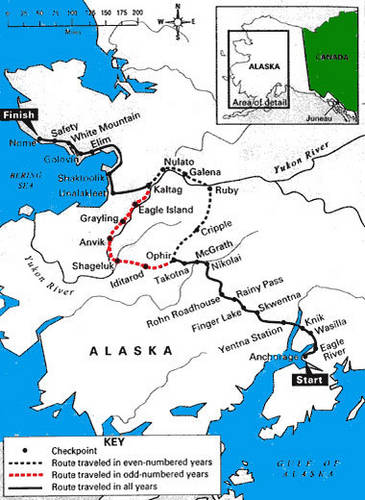