She is really beautiful ... She doesn't mind being around several jeeps at all. She walks straight ahead to us in a deliberate step, turning to a slight hill at the last moment. There is a chance for handy trackers that Nafees and Pappu undoubtedly are. They can accurately estimate where the female will go. We go immediately to overtake her and be ready to go with the cameras. 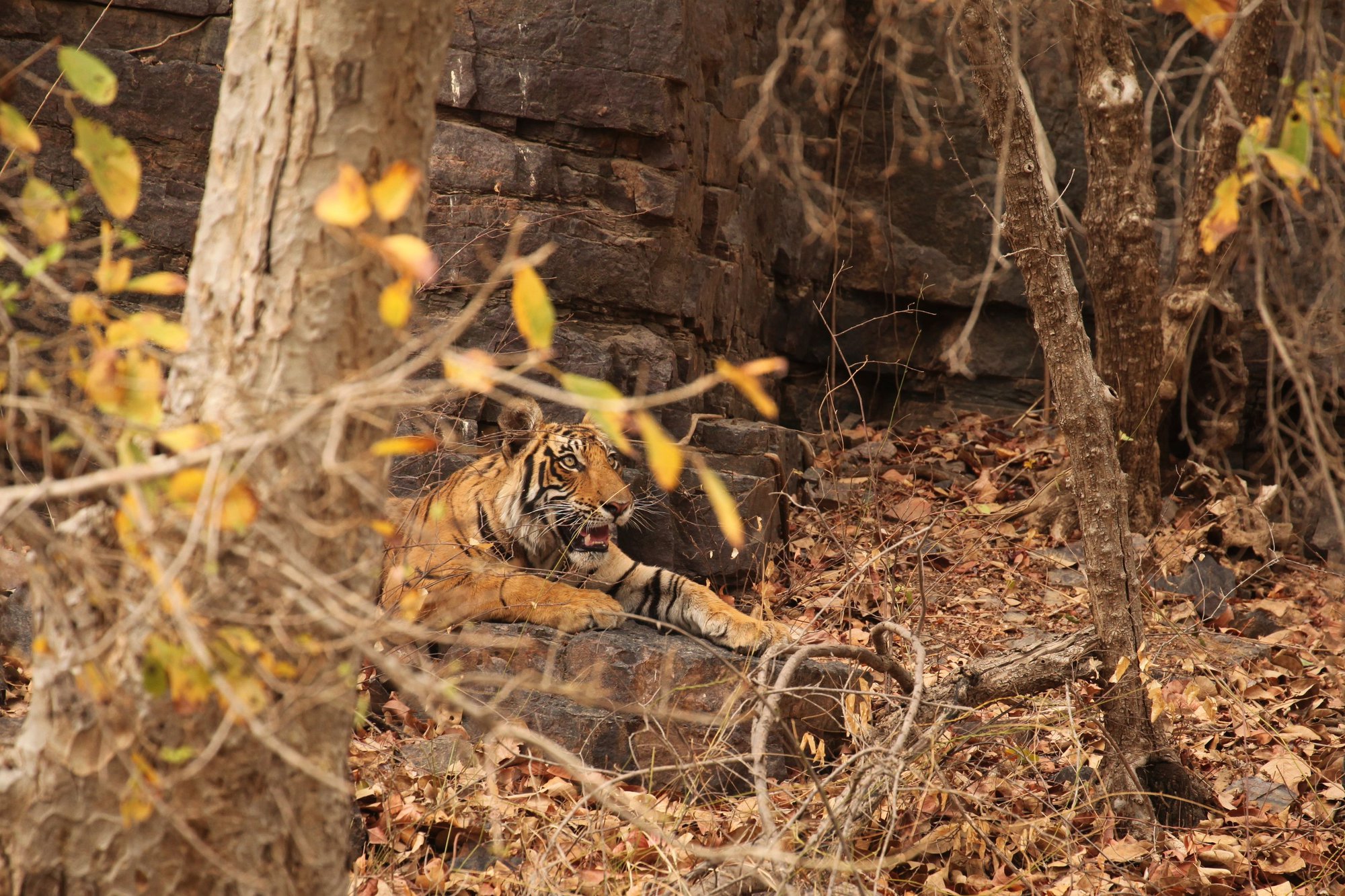 We accompany Arrowhead all the time until she leaves Zone 3. If you still remember, that's just a minor problem that you can't move between sections in one safari. We do not complain, this natural theater so engulfed us that we did not realize that the time of the visit was actually over. We're coming back again. As always, we will stop before entering the zones so that our guide will get the most accurate information about the current tigers' movement in each location. In the afternoon we will try Zone 1. 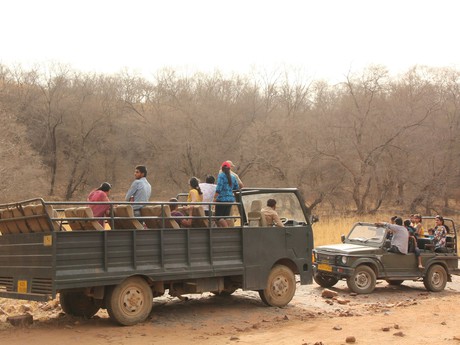 Perhaps now we could say something more about the tiger diet. To their favorite prey is certainly deer (here, especially sambar and axis), then they are wild pigs, very rarely bears or crocodiles. The tiger does not seek a skirmish, will not risk injury. When there is an emergency, they do not despise birds, reptiles or fish. Most often they hunt at night, so the opportunity to record a tiger in action is not very big. They approach their prey from behind, when they reach the optimum distance, they catch up with several jumps. According to statistics, tigers are among the most unsuccessful hunters. But they don't have it easy, everyone around them warns and also warn each other. 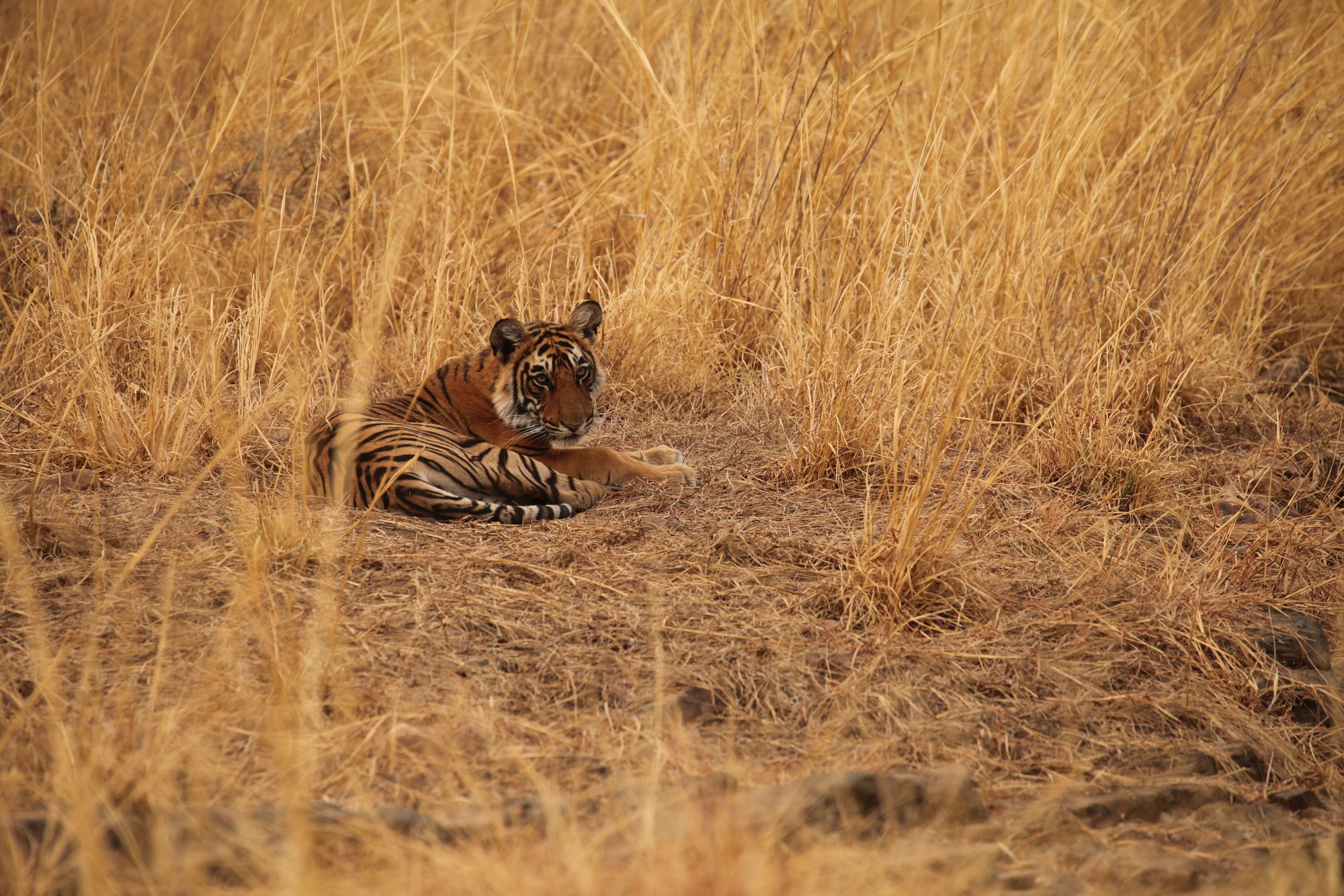 Tigers do not merge into groups as lions do, for example. For their home they choose the territory they mark with urine, or scrape the bark of some trees that mark the boundaries. The leading male territory includes territories such as 4 females, which the dominant tiger somehow "visits", controls and tags. But the fact is that the female only seeks mating because of mating. But actually, what we know ... It was even observed how the male returned to his family and played with the young. 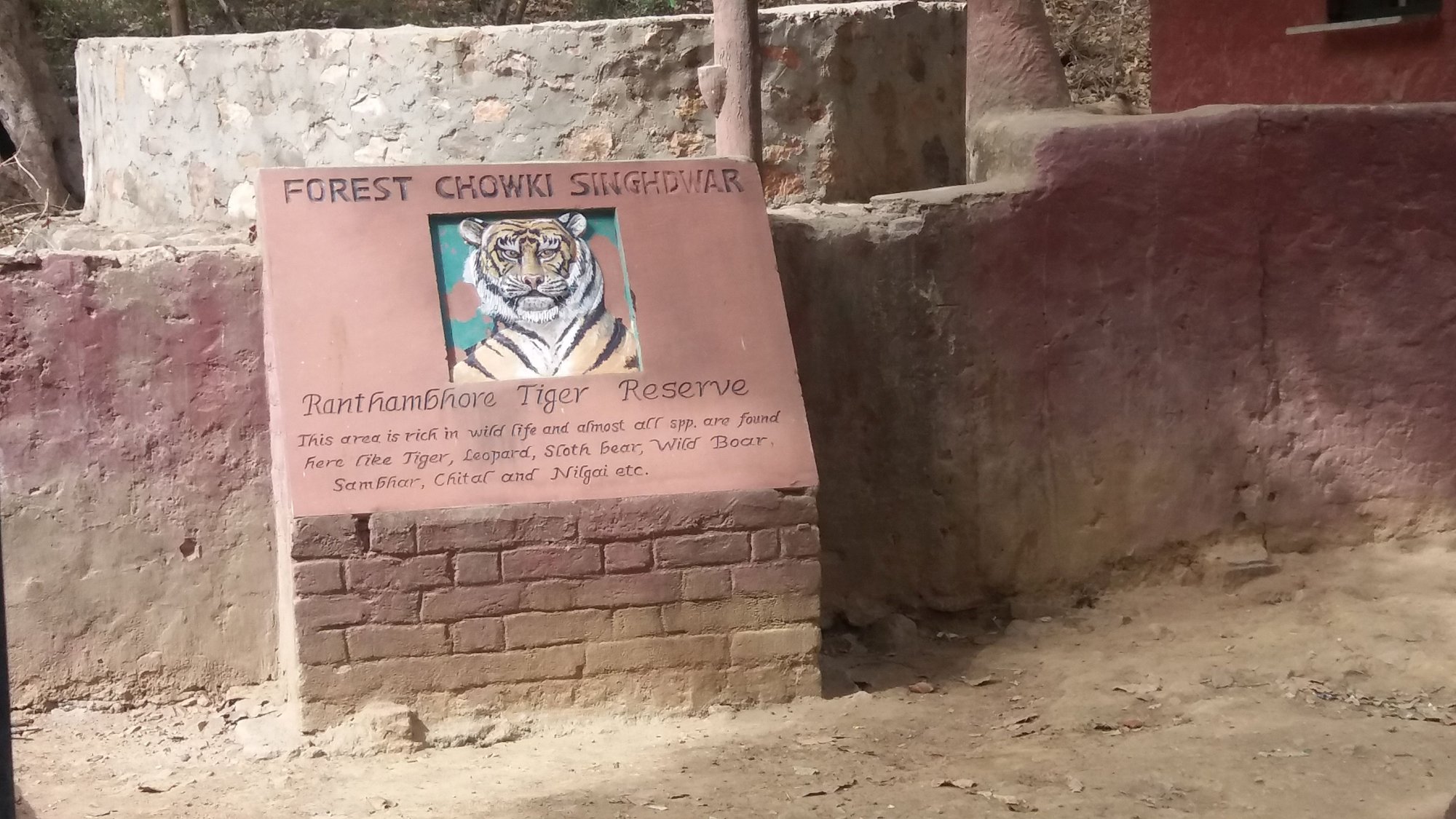 We're going to Zone 1, we haven't been here yet. This one has something to do with another one. With my first safari. At that time I met the first tigress daughter Noor T39.
We have a message that her sisters are moving right here.

After about a half-hour drive we arrive at some green water surface. Tigers love water. I learned that Ranthambore National Park is one of the few where water bodies are artificially built up and water is continuously added to them. 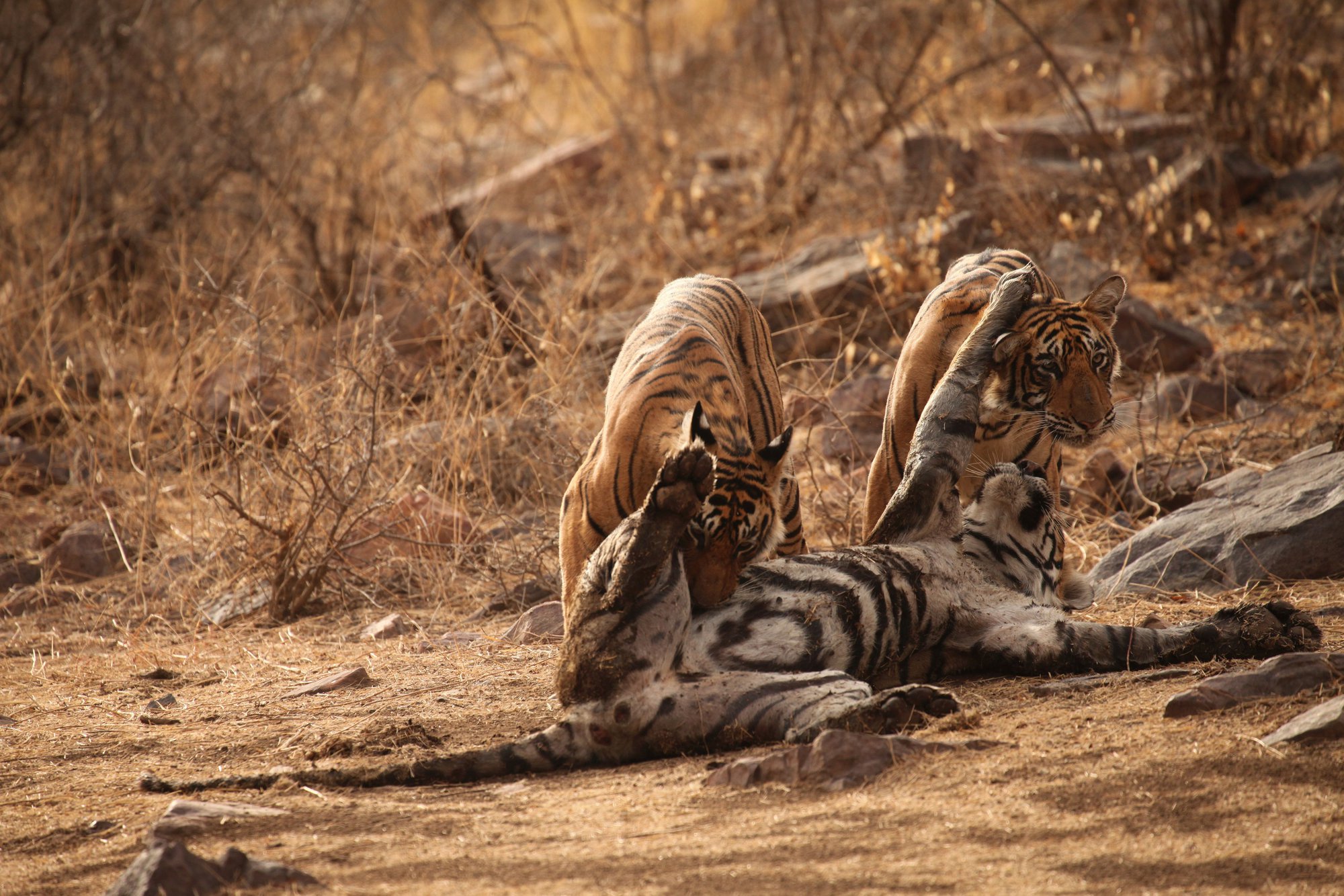 We are not the only ones by the lake. We are trying to choose the best place to take pictures, even leaving the pond for a while, if we are lucky elsewhere. Another tiger but not in range, so we go back. Tigeress' rusty-like color and her black stripes blend very well with the green. She enjoyed idling in the water. A few meters from the water, there are a few sambars waiting to see if the beast will let them drink. It could almost be said that she likes it quite well. He stretches in the water, sometimes sh. 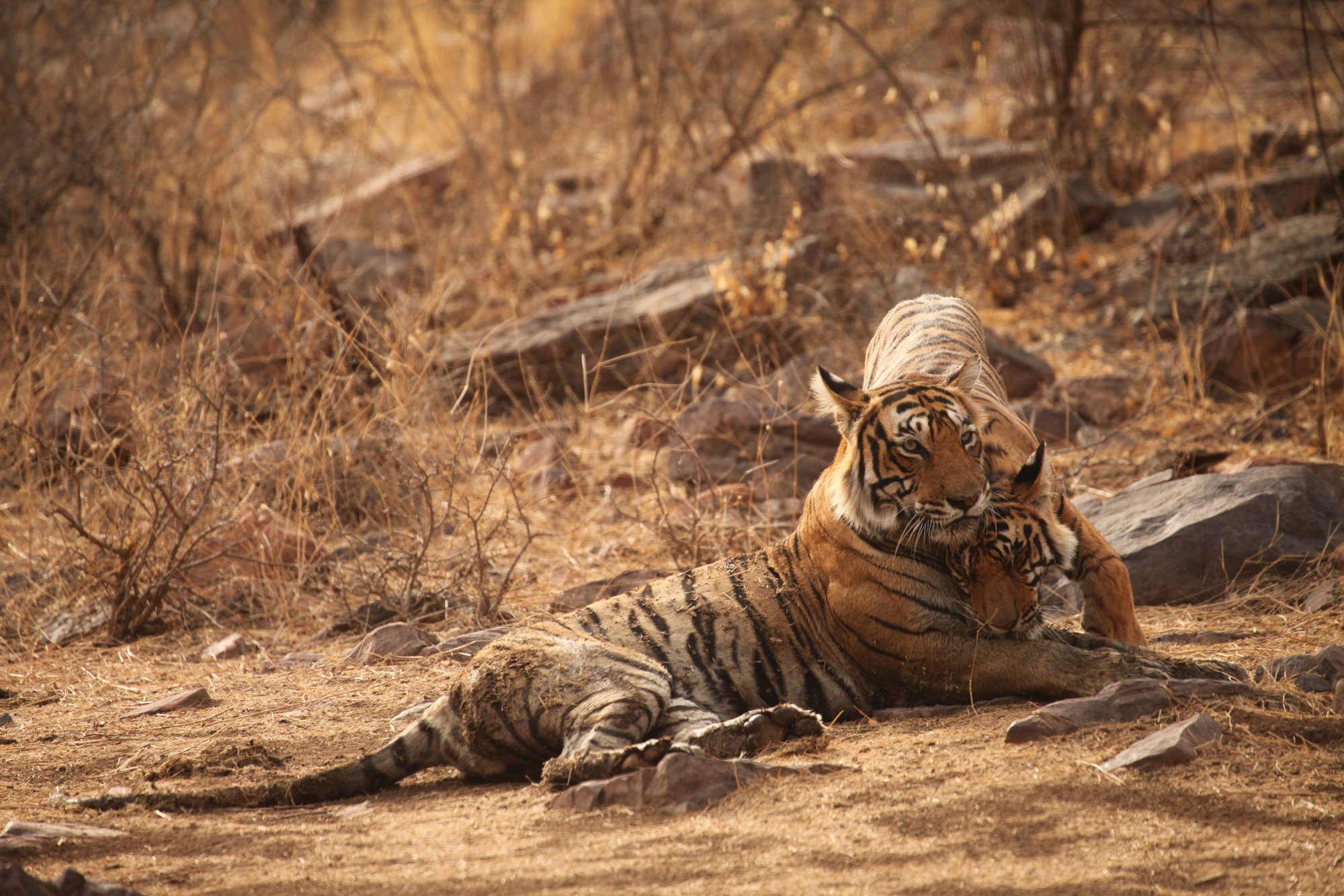 We have many pictures. It seems that the water bath doesn't give up right away. Yet he suddenly rises and leaves to hide in the thicket. The reason is the arrival of her sister. This tigress is very actiony, maybe you can even use a cheeky expression, because it is very uncompromising in choosing your territory, even marking the space that belongs to her mother. 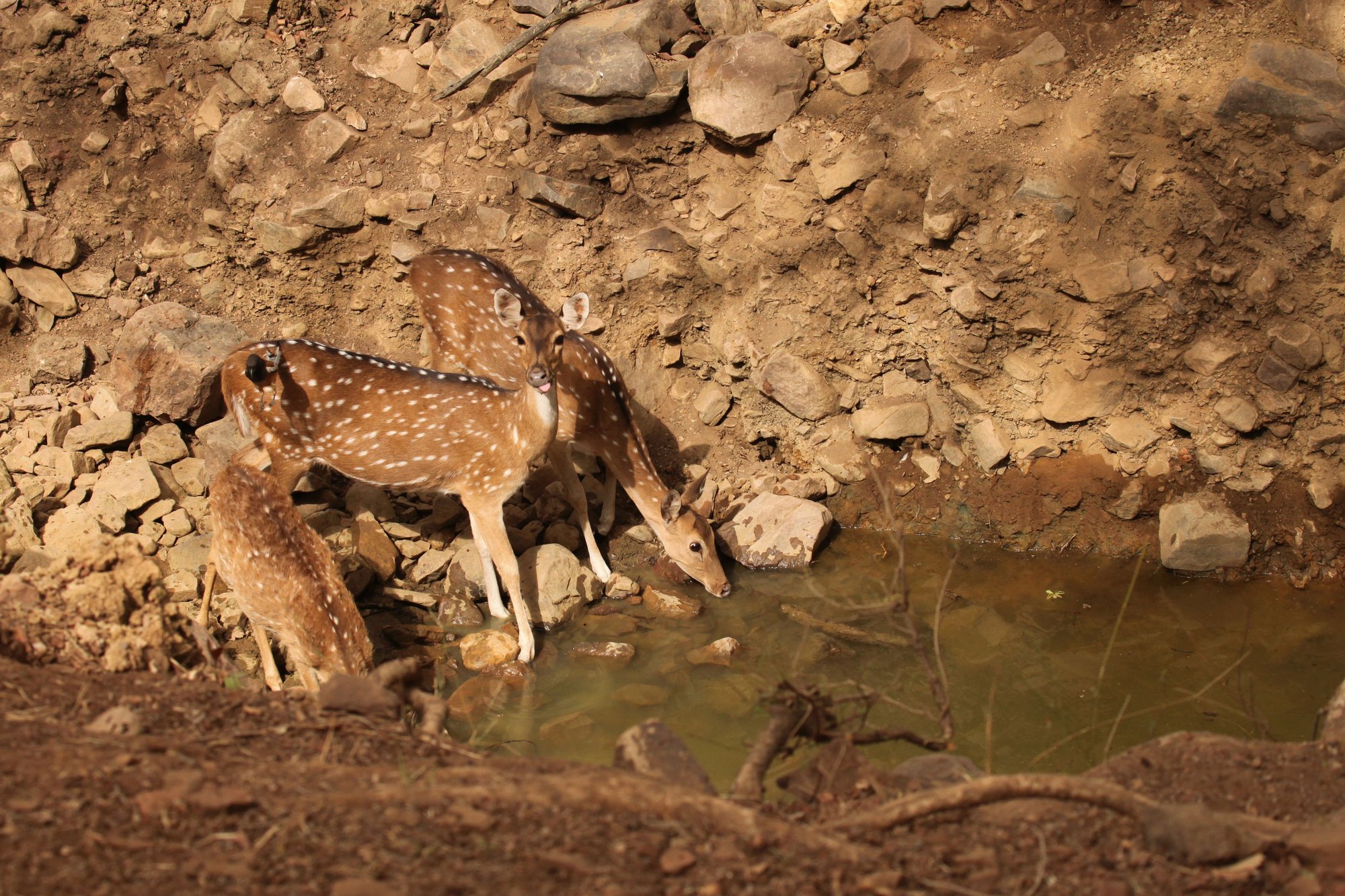 Next time, we will talk about the most beautiful experience that the Krishna tigress and her kittens we had.