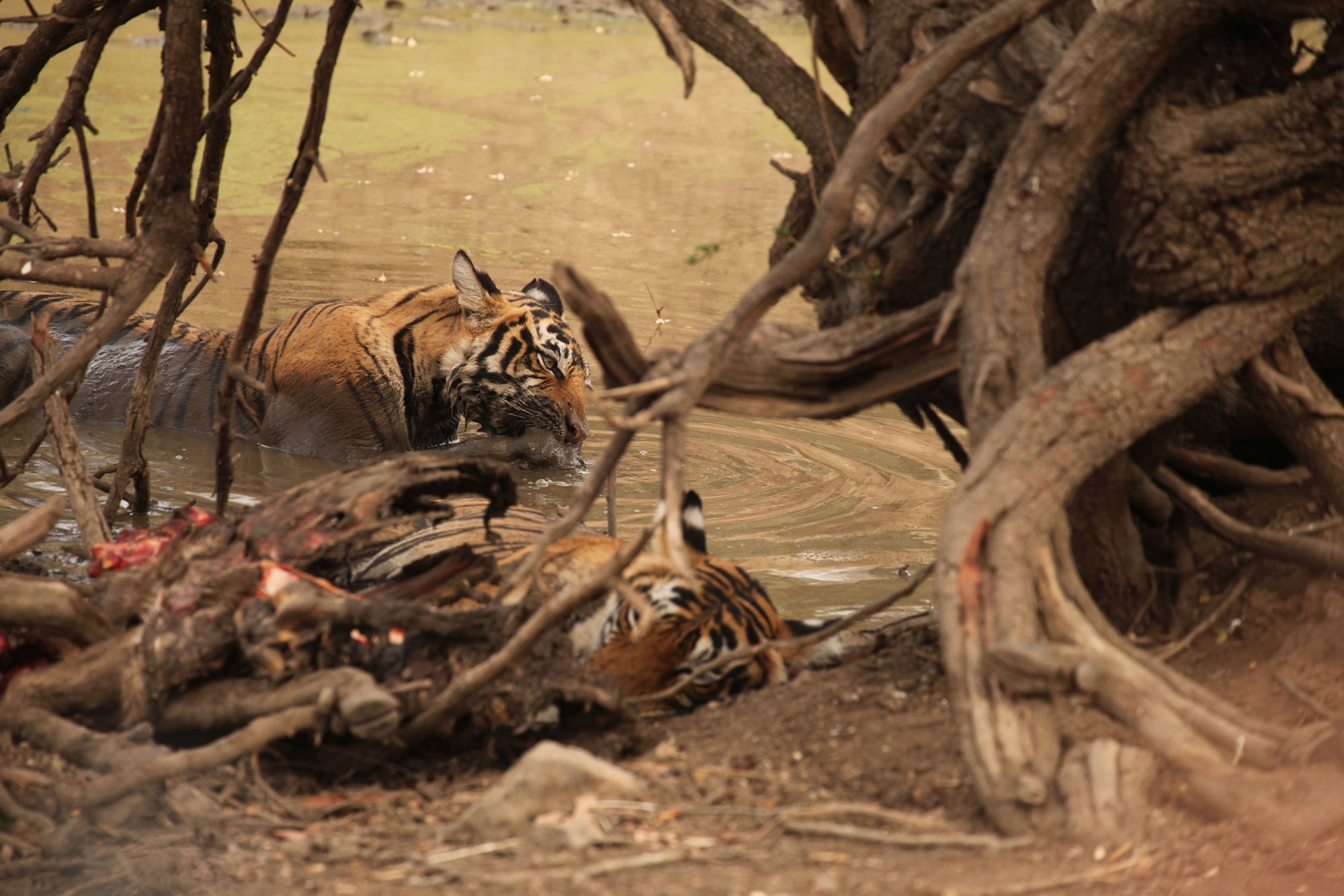 Beasts remain by the water. Their feast is really breathtaking. There is enough of food, so it comes out to everyone, alternates in consumption, sometimes one of them growls when it feels that the other one wants to taste just the bite he chose. When I was preparing for the expedition, I tried to study a lot, so I know that tigers are proficient swimmers and some individuals can crocodile. However, I was not a hunter for the whole stay. 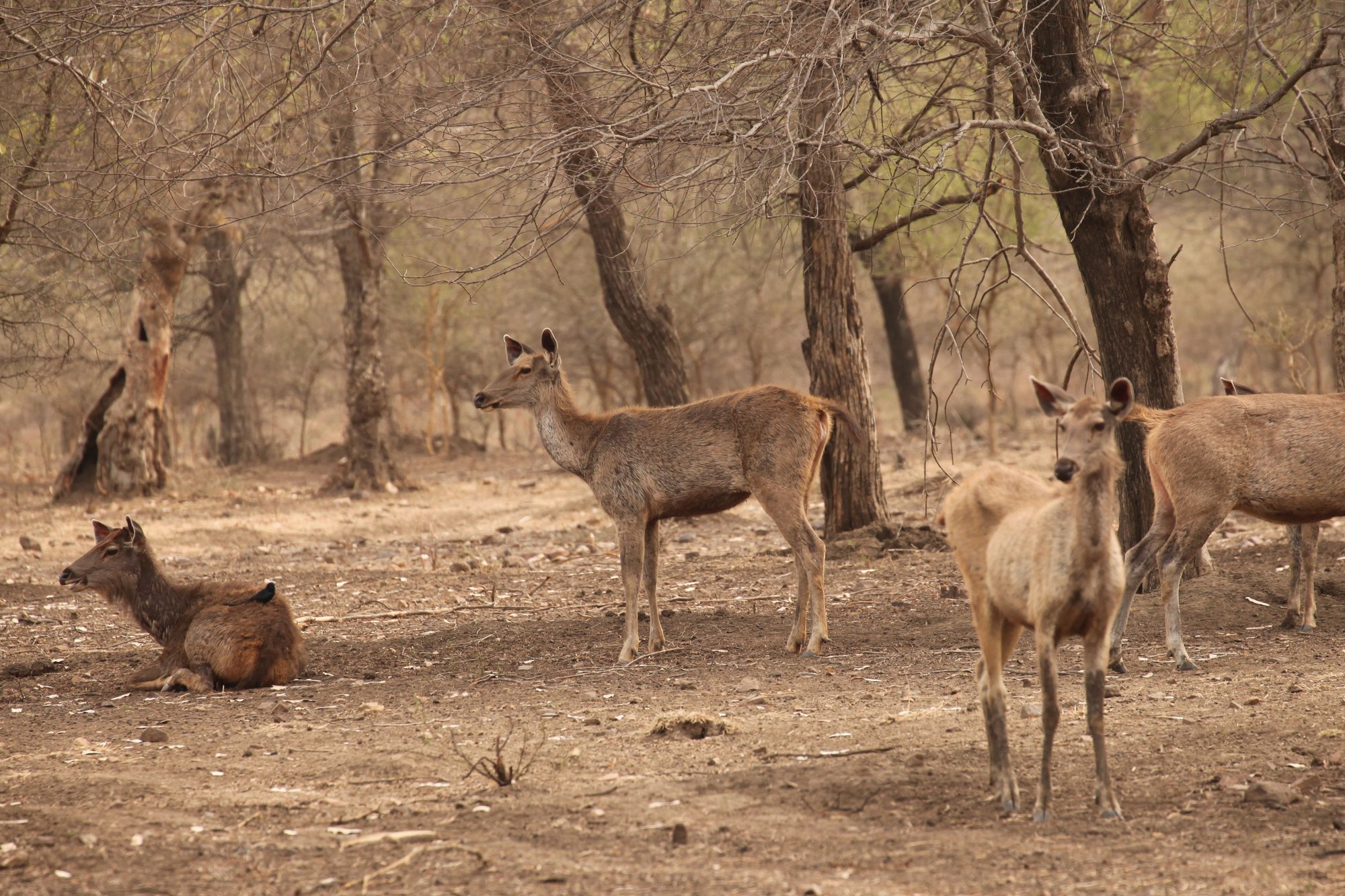 It's strange how close to the beasts is their food. Sambaars, Axis and other animals are nearby. They also have thirst, so they need to get to the water. They probably have a very well-developed instinct to evaluate that this tiger is alive, tired, and there is no danger from it, or vice versa, beware, this is dangerous, beware. I have heard how they make such a strange sound that they warn about. 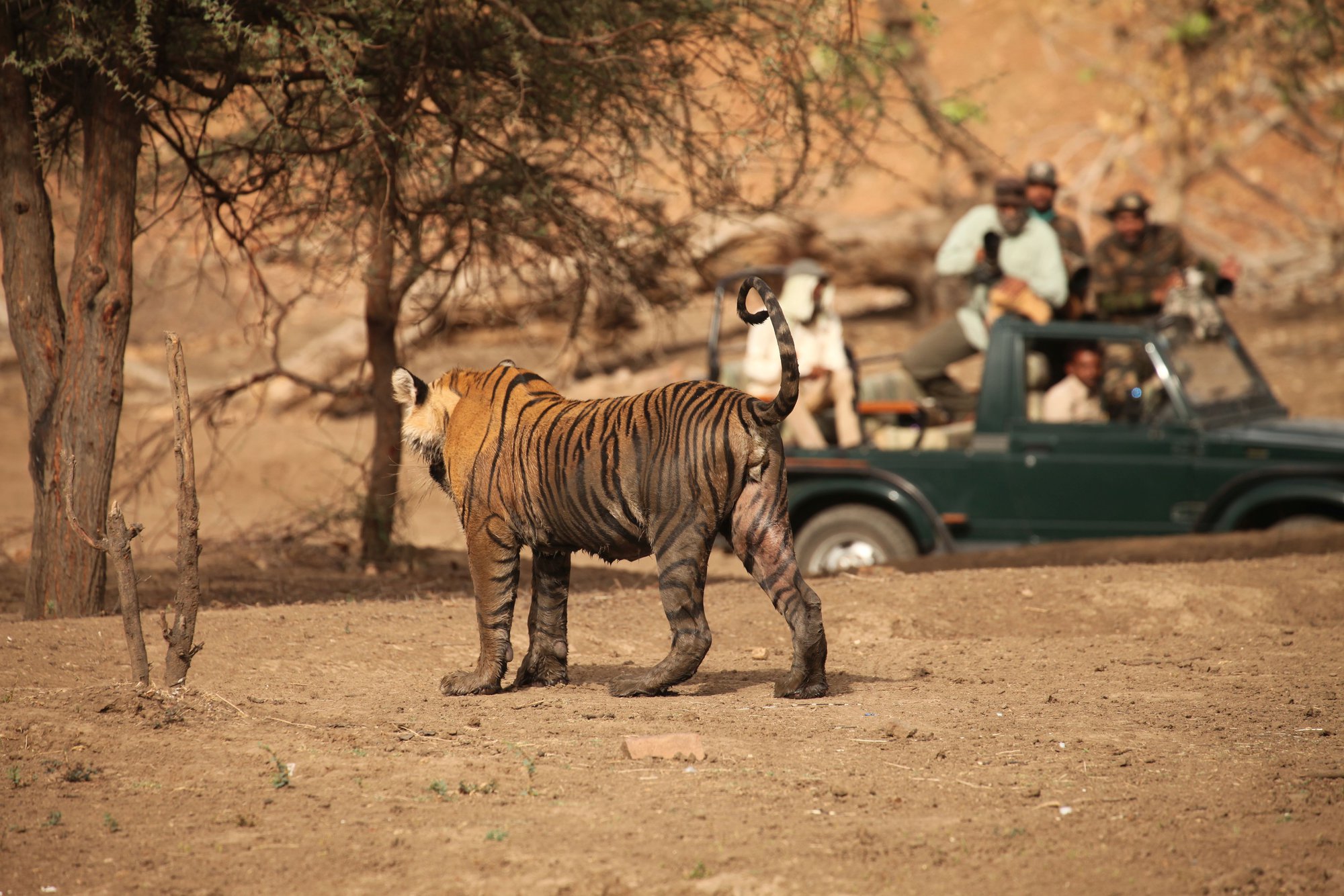 For a long time nothing special happens, the diet has enough. Only later in the afternoon, one youth chooses to explore what lies behind the top that is all around. The pool is in a depression from which the surrounding deer cannot be seen. One boy goes on a survey. It's funny, it's all hidden in the hillside and just stretches its nose to feel what else is there to eat and they can't see it. After all, the hunt will change his mind, climb up and lie down opposite us. The siesta time. 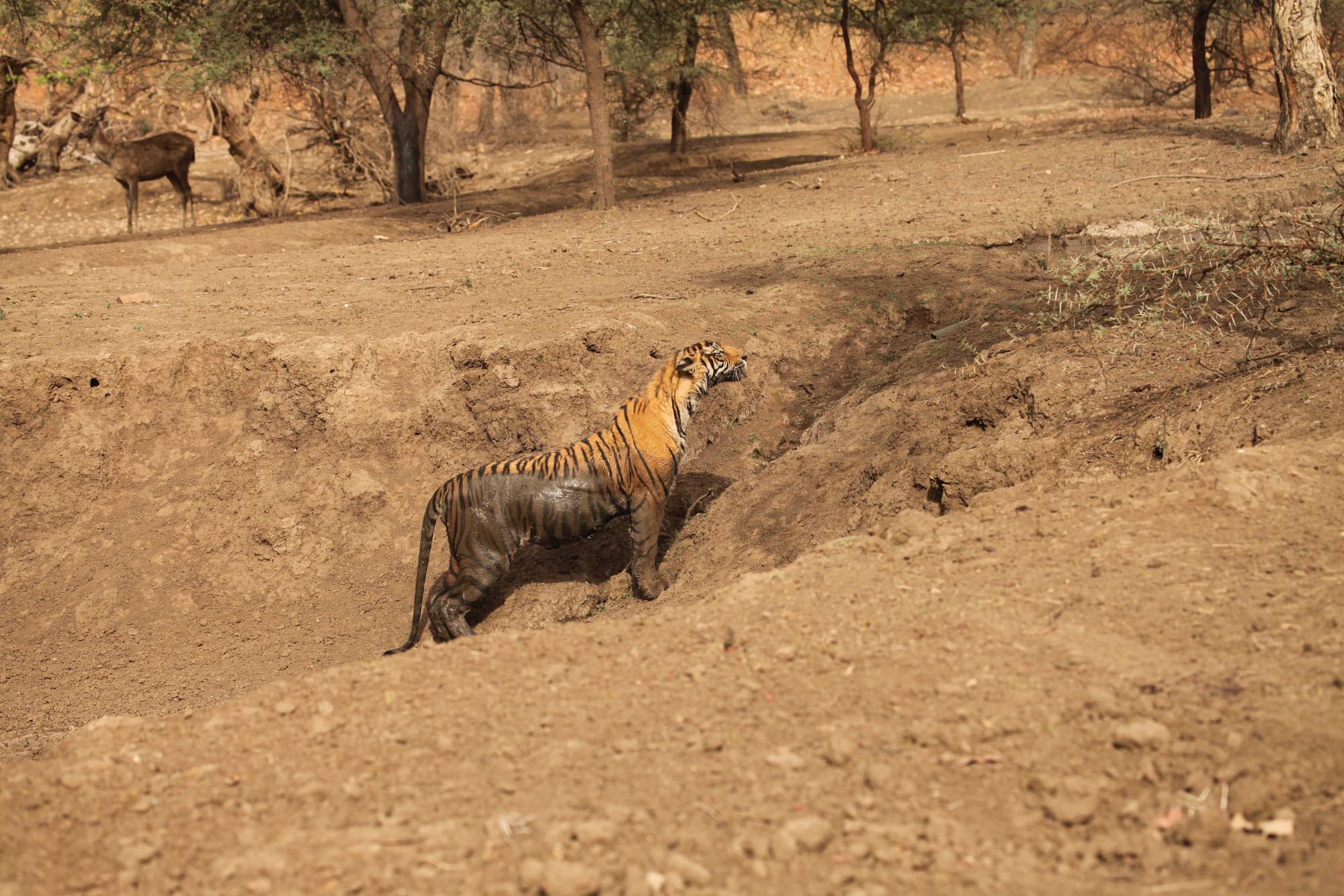 We're going back to the hotel. Followed by classic, dinner, data backup and beer. The most important thing is a good rest, tomorrow we will have another adventure.

It's always just a snap, as soon as I fall asleep, the alarm clock is ringing again. This time, we're going to look at section 3. As far as the environment is concerned, it's really the most beautiful. This is where Padam Talao and Raj Bagh Talao lakes are stunning, with the ruins of Raj Bagh Palace. Even entering the zone is mysterious. Just in front of one gate you pass through a huge banyan whose air roots are in themselves a magical natural tunnel to the wilderness paradise. 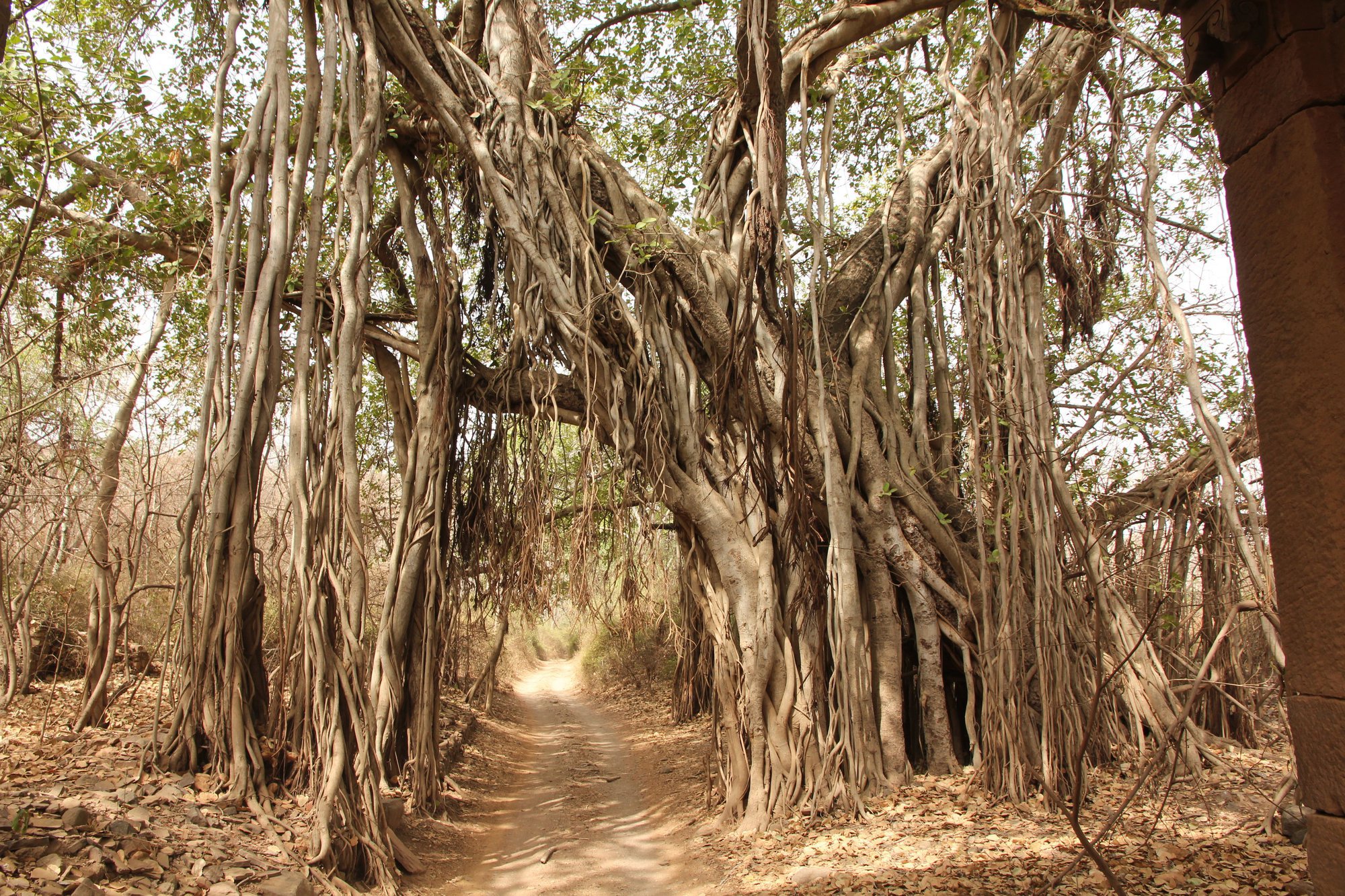 Our guides are very attentive. It is only dawn, I have not been able to look around properly and we are building. First, I register monkeys running near the jeep and shouting. I didn't really think about why they were doing it, but Nafees was looking carefully for it. He points straight up the hill, I don't see anything special, but I'm taking that direction. Only then do I find a leopard in front of us. These animals are very shy and are very lucky to see him. 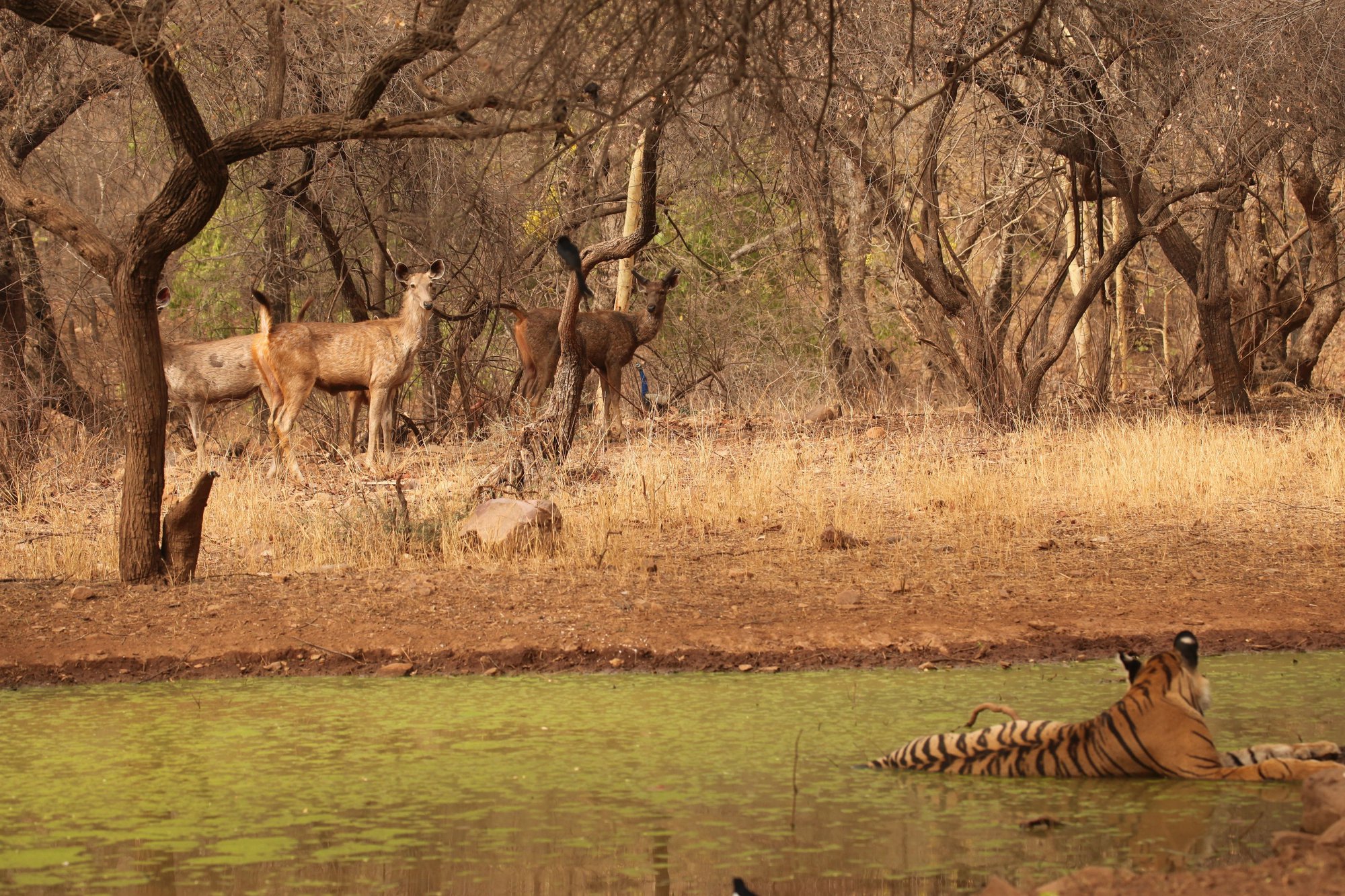 We're not in a hurry this morning. We drive through a picturesque landscape, watching all the animals around us. For a moment we will come down to the Raj Bagh Palace, which we will often return to during our stay. Zone 3 is the territory of the beautiful Arrowhead tigress, which has recently lost its youth. 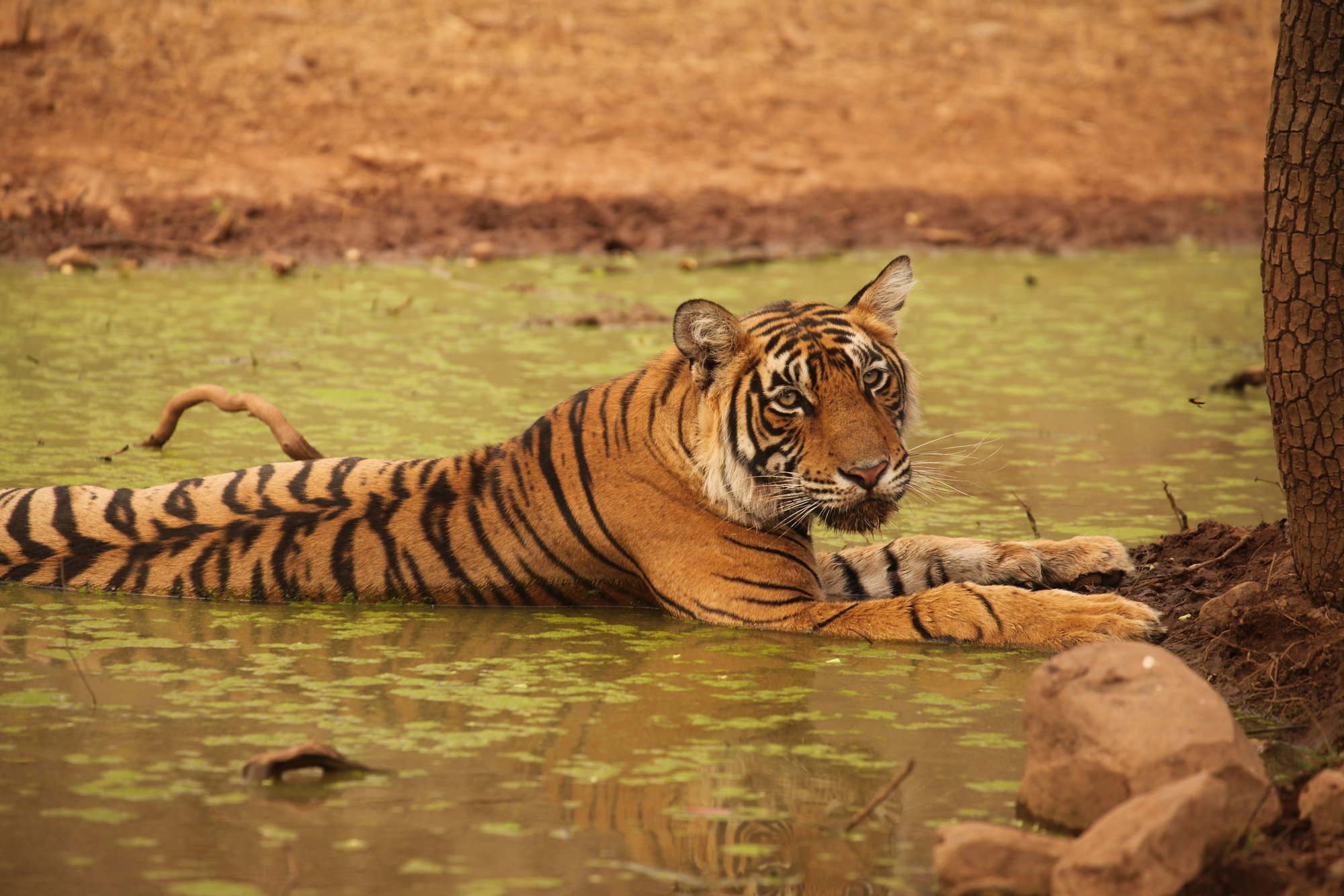 How do tigers actually breed? Females reach sexual maturity earlier than males, already between 3 and 4 years. Boys have to wait about a year longer. In order to be sure that she is ready, the tigress identifies its territory with a specific odor and in addition loudly calls potential suitors. Like lions, tigers have great stamina in love games and are mating fifty times a day. The female is pregnant for about 100 days and most often has 2-4 pups. However, their mortality rate is very high, reaching up to 60%, the most dangerous being foreign male males. Kittens are killing just to get the tigress reborn with them and they have their descendants. The chicks feed on milk for about two months, trying to hunt some birds or smaller fawns for about half a year. Sometime around a year and a half already hunting alone. Mostly, they are young with a mother up to 2 years old. When they are females, they can still stay in their mother's territory. But the males must be gone. 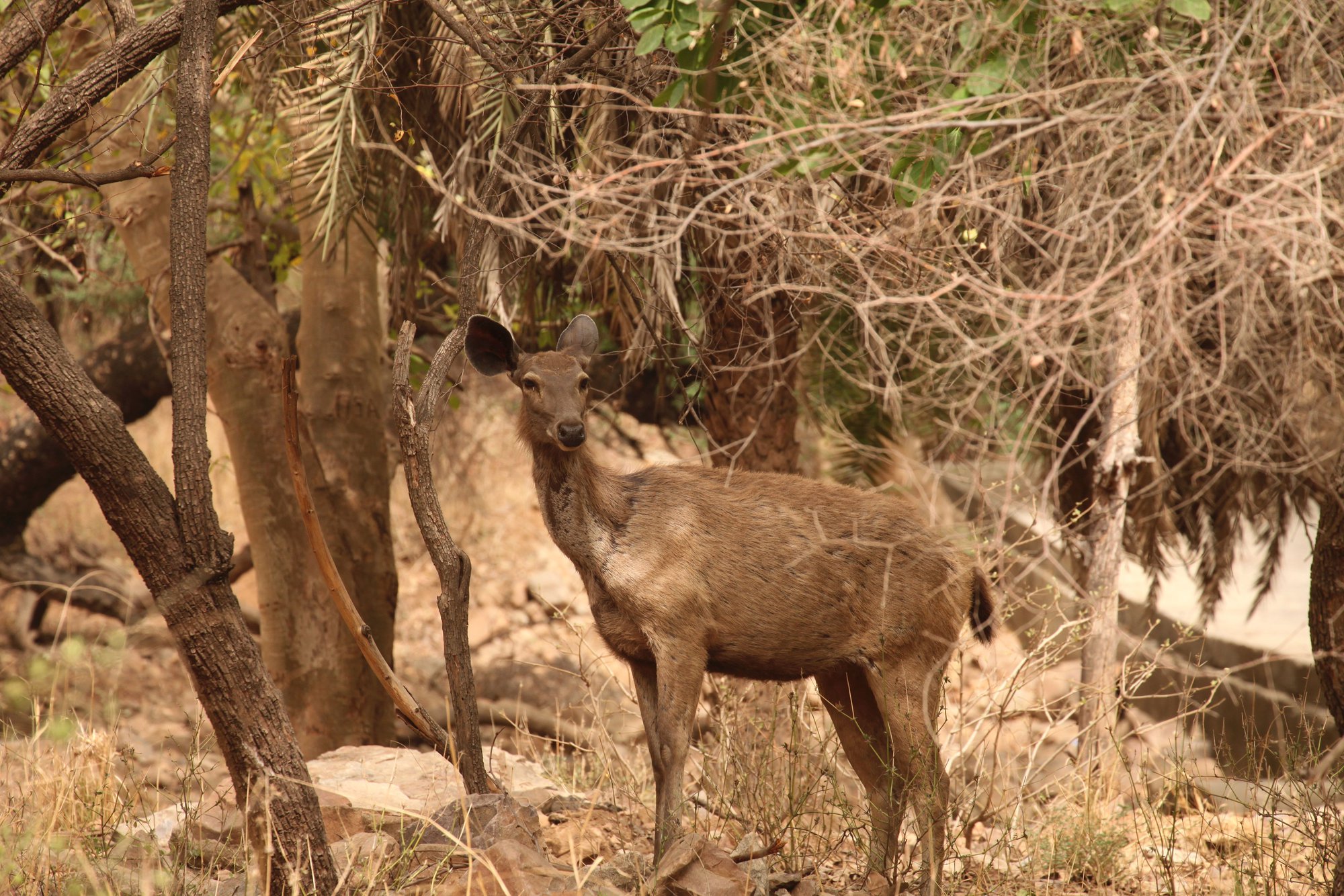