en.infoglobe.cz » Indonesia: It Did Not Burn Down VI – Java: Blue Flames, Sulfur Bearers on Ijen Volcano

Several sulfur stones lay by the road (we immediately weighted them in our hands). They were so heavy! Every bearer takes around 100 kilograms of them. That’s something! However, he gets mere 100 000 IDR (about 200 CZK). Every bearer does about two rounds. Then another shift replaces him. Some carry sulfur in baskets. Others load sulfur into carriages they had take up on their backs. The work goes on night and day here. Sulfur smell became quickly unbearable to us, however. Therefore we took out mouth masks from our backpacks. 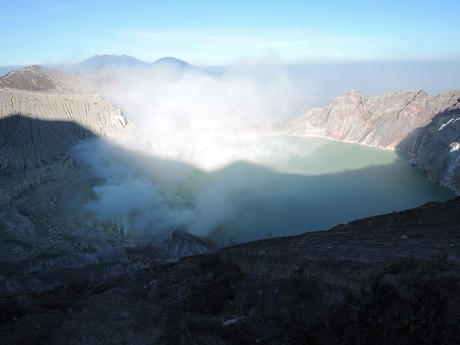 We were descending deep into the crater, blue flames were increasing in size. In front of us, workers were doing their task surrounded by fog. Industrious as they were they resembled ants. And truly they looked like ones by those huge yellow boulders. Impressive blue flames were visible in the background before huge smelly cloud hadn’t covered them. We tried to run away. Which was a hard task to do. We were surprised to notice the workers didn’t wear mouth masks or respirators.. 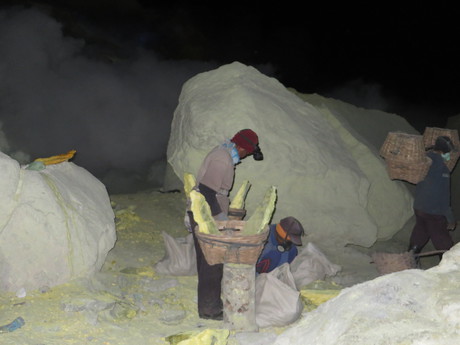 We gaze into large blue flames, enjoying something we had never seen and would hardly see in the future again. Flames blaze several meters high having more than 500 degrees Celsius. We see also flames flowing down in the distance as if they were a river. We though these blaze right out of the ground. However, when the cloud dispersed we notice a network of black pipes leading sulfur gas.

We saw a worker holding a hose right in front of us. He was extinguishing sulfur coming out. It seemed he was getting water from the lake nearby. It is said it is world’s most acidic lake . Due to sulphuric acid and hydrochloric acid the pH value is less than 0.3. Acidity of the lake also has negative impact on surrounding water areas. 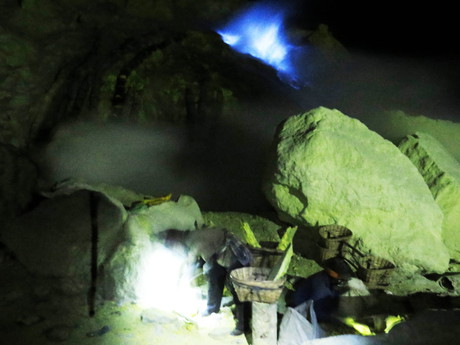 Once sulfur solidifies other workers break it to pieces and sulfur rocks take to baskets. When they filled the baskets they lay a bamboo pole on a shoulder and climb up from the crater. Moreover, they have to walk through crowds of tourists. This scene happens with the night sky full of stars above. The rough and dry volcano landscape is truly enchanting.

You can also climb up the volcano during the daytime. The vista of the crater lake is completely different. A path accessible to tourists follows the whole caldera. However, blue flames are not visible on the bottom which is why many rather go on the top of the volcano in the night. Yet it is worth going there in any time of the day. We recommend you to set off late in the night to see the crater also during the daytime. 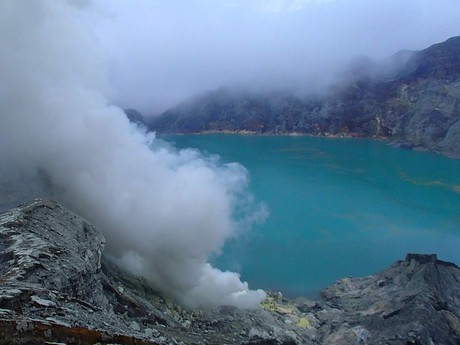 Going up and then back down to the car park takes just under 5 hours (we spent about 50 minutes with workers there). I remember Ijen often. Partially also for the softshell jacket I wore there. It smelled of sulfur even after washing it in the washing machine.

It takes about an hour to get from the car park at the volcano to the city of Bondowoso. We bid our goodbyes to our nice driver and almost missed the ferry to Bali Island (15 000 IDR per person – about 30 CZK). And what it is like to be there? This is the matter of the following article. Be sure not to miss it!