en.infoglobe.cz » Indonesia: No It Did Not Burn Down IV – Java: Getting Up to Bromo Volcano and the Madakaripura Waterfalls

People who don’t like walking on volcanic sand can pay for a horse ride (for 150 000 IDR – about 280 CZK for one way – several hundred meters). A horse gets you right in front of steep stairs going right to the edge of Bromo . Tourists like this option. Looking down at “moonscape” where Batok volcano enhances the view is breathtaking! Then, the jeep rode us to a village where our driver stayed. Then we continued to the other wonder located in the area the Madakaripura waterfalls. 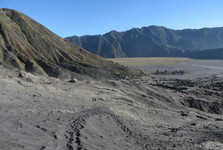 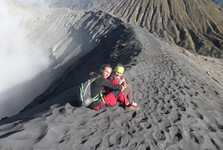 Deep in the mountains are the waterfalls. Water from there flows into a fern valley. One has to wear a raincoat or swimsuit because you go righ under the waterfalls. Under a waterfall or at a parking lot you can buy a raincoat but we were carrying our own, We knew in advance that we would like to see the waterfalls. Locals drain drinking water from the waterfall. Walking under them was very relaxing. And encouraging. There are hardly any tourists. The only group we encountered were some Indonesians taking bath in a small pool. Then we saw some Japanese. The place is largely unknown to tourists and hadn’t we our own driver would be also a problem to even get there. One surely makes a swim here – it is believed dipping oneself in water here gives health, strength, energy, and youth. 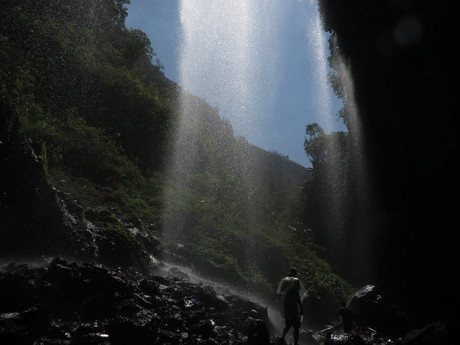 The admission to the 7 waterfalls, the tallest in eastern Java, is only 5000 IDR per person (ca. 10 CZK). We don’t recommend you to nod to people offering themselves as guides. Even for a person with really bad navigation skills it is difficult to get lost in the area. There is only one route to the waterfalls which goes along a stream. At the end of the trail there is a rock wall. To go back means following the same path. 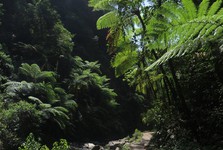 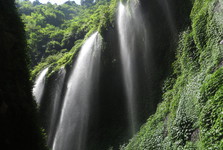 We nodded to the offer of a guide for he offered his services for only about 2000 IDR (4 CZK). We did want to give him some employment even though we didn’t need him However, after he concluded his guidance to the waterfalls, he asked for 200 000 IDR (shy 400 CZK) even though he didn’t tell us a thing. He didn’t speak English and he only marked the waterfalls with numbers and took couple of pictures of us. Beware of such people!. 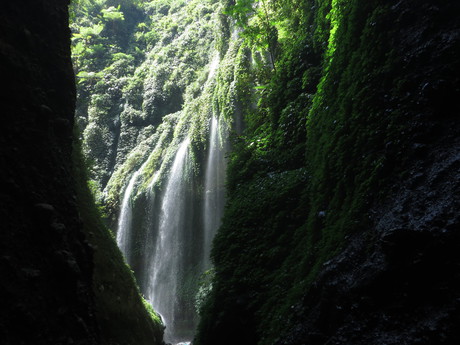 This place isn’t only about relax. It is of historical significance as the name Gadjah Mada is involved in the legend of the waterfall. He used to be the prime minister of Java’s largest empire Majapahit. Vuruk Khayyam, the then ruler, gifted him part of the land. Gadjah Mada refused yields from this land before Indonesia had united under Majapahit empire. Madakaripura is also considered his last place of dwelling. According to the legend, the Prime Minister dissolved in the air near the waterfalls. Therefore, nobody was able to find his body.

I will reveal you bit of what coming next: our journey continues to the east to Ijen volcano. How was it there? Why we decided to go there? More in the following articles.