en.infoglobe.cz » Indonesia: No It Did Not Burn Down V – Java: To the Edge of Ijen Volcano and Discovering Its Mystery

How you can get to Ijen volcano? We were told you have to rent a jeep and hire a driver in Bondowoso town (like in the case of Bosomo volcano). But this is a nonsense! Just rent a cheap car or hire a personal driver. Another option is to buy an organized trip, mostly overpriced. Even getting there by scooter is an option. Allegedly there is only one scooter rental in Bondowoso (even though many people there tell you there is none which is just another way to lure you to buy a trip organized by them). Therefore, you should book a vehicle you want to rent in advance. Which was our original plan. However, we had to change it as we would have a personal driver. 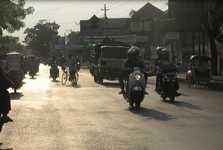 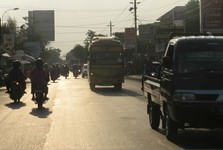 Anton drove us to Jepara that is 600 kilometers away. Despite choosing the shortest route the ride was very long, boring and mostly along broken roads. As another Indonesian drivers he was not afraid and he bumped into many deep road holes. I think he suffered rather a loss. The more we were closer to the volcano the lower the sun above the horizon was. They wanted to know our names, nationalities, and passport number when we reached the gate. And, also 10 000 IDR fee (about 20 crowns) . There were two other gates like this one. The driver told us weird things had happened in the area. People were hid there and often killed. But now it was under control. We were driving across beautiful landscape but we did not see much of it. I think it must have been beautiful to drive along this mountain road during the daytime. Well, road at some points hardly resembled anything but. 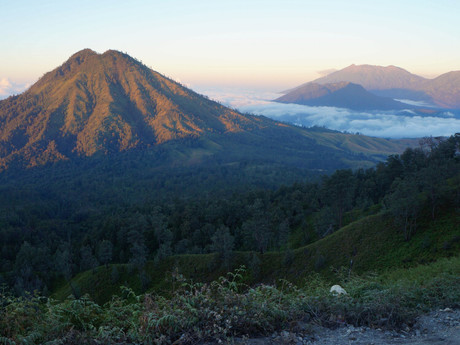 We pondered whether we should climb the volcano on the same day or the following. Eventually we decided to climb there the same day as we were located up in the mountains already. Finally we reached a parking lot. If going in the night, people are allowed to climb there after 1 a.m. when a box office opens. Every visitors must buy a ticket (100 000 IDR per person – 2000 crowns). Guides offer their services there as well. It might be useful to hire some in case you would be the first to go. However, there is hardly a chance you would be the only ones going up there. Which means you just need to follow the lights in the night. 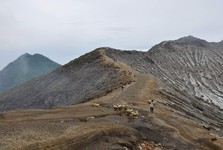 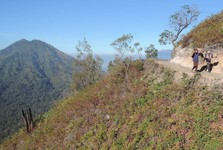 Shortly after one o’clock we were at the gate. There they checked our ticket. Then we took headlights on our heads and climbed up following the lights in front of us. Dust covering the terrain was slippery and the hill steep. The landscape of eastern Java is beautiful under the moonlight. Not after long the moon raised above Raung volcano and lit its huge caldera. The whole scene looked like we were looking at some hellish pot. For a while we stood there enjoying the beauty. 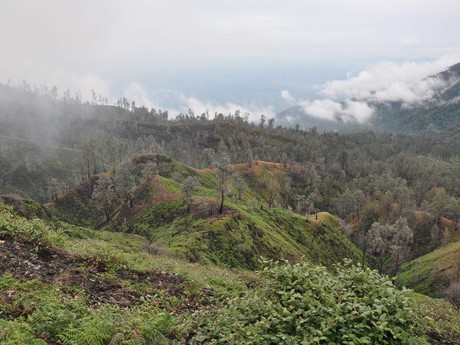 Abandoned carriages and baskets attached to bamboo sticks were things we passed by along the road. They would be picked up by the bearers who owned them. When we finally got up to the top we were walking along the contour line. We were still wondering about the likelihood to see blue flames. Not long after that we stood at the railing attached to the top of caldera. A notice board prohibiting to go any further was at the beginning of the route downhill. We moved our eyes from the board. Yes, they were there! They were really there! We saw blue flames in the distance. Not minding the boards we followed tourists in front of us. We really had to see this phenomena up close!

Next week we are going to tell you about how it looks inside the crater...