en.infoglobe.cz » Indonesia: No It Did Not Burn Down X – Lombok: Climbing to Crater Rim Camp

We decided for a three day trip. We wanted to start in Sembalun because it is at higher altitude (900 meters). At the last moment we were assigned one group. We ate late breakfast, reorganized our backpacks, and then we were riding on the deck of a truck to Sembalun. We got to know local load bearers and guides, bought some cookies. Then we walked in the fields at Mount Rinjani’s foothills. Pace of walk was fast because we set off as late as at noon. Slow-walkers could therefore reach the crater before sundown. We passed by the first rest place as if it even wasn’t there only when we reached the next one, we took a short lunch break. 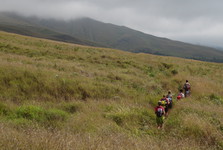 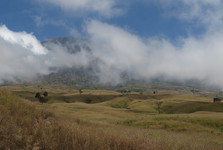 We kept on going across rolling landscape covered with dense and high grass. We were expecting the terrain to go steeply up at any moment. This happened when we crossed the third rest area (1 800 meters above sea level) after about a five-minute break (we looked at small monkeys swinging in treetops. Then we were walking up steep terrain that was neither easy to walk nor difficult. We were walking along dusty pathway somewhere covered with patches of lava. IT recommend you to not to stop on the path. It is much more difficult to return to your previous pace. Twice happened that we though that we would already reach the the rim of the crater . But twice we were mistaken. However, we were determined to continue to the campsite. 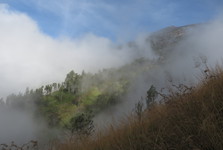 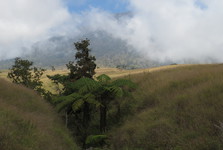 The load bearers carry the load in two baskets both tied to a bamboo pole. It is really amazing they can walk the trail in flip flops without any problems! 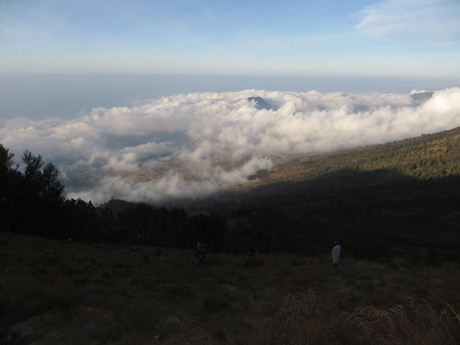 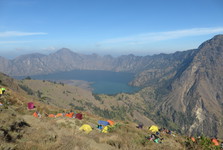 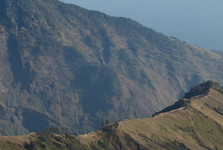 Seeing sundown here is true reward for overcoming such an elevation. Red sky is visible in the background over little clouds around the crater. It’s beautiful! You will be amazed if you look in any direction! We could even buy a beer sold by some local guys. They brought it up to the summit and sold for twice the normal price (80 000 IDR – ca. 160 CZK). Enterprising spirit is creative in Indonesia. 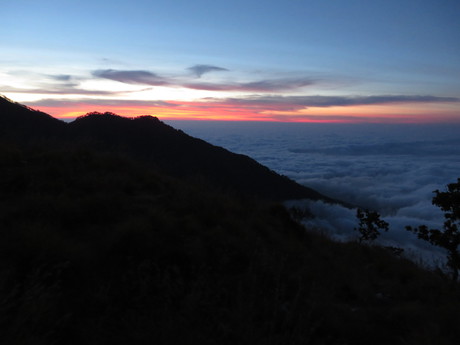 Having difficult climb behind us, we lay down into our tents. Set your alarm for an early hour because you will climb up to 3726 meters! The very top! But about this in our next article.