After lunch, we finally set off to our destination, the small tourist village of Bukit Lawang, without further breaks. It is located on the banks of the Bahorok River in North Sumatra. Bukit Lawang previously attracted mainly for its orangutan rehabilitation center, founded in 1973 in Gunung Leuser National Park. Efforts have been made to prevent the decreasing number of orangutans, which is the cause of hunting and deforestation of their natural habitats. However, in 2002 the Center was closed. A year later, the area was hit by a devastating flood that affected nature, homes, and human lives. 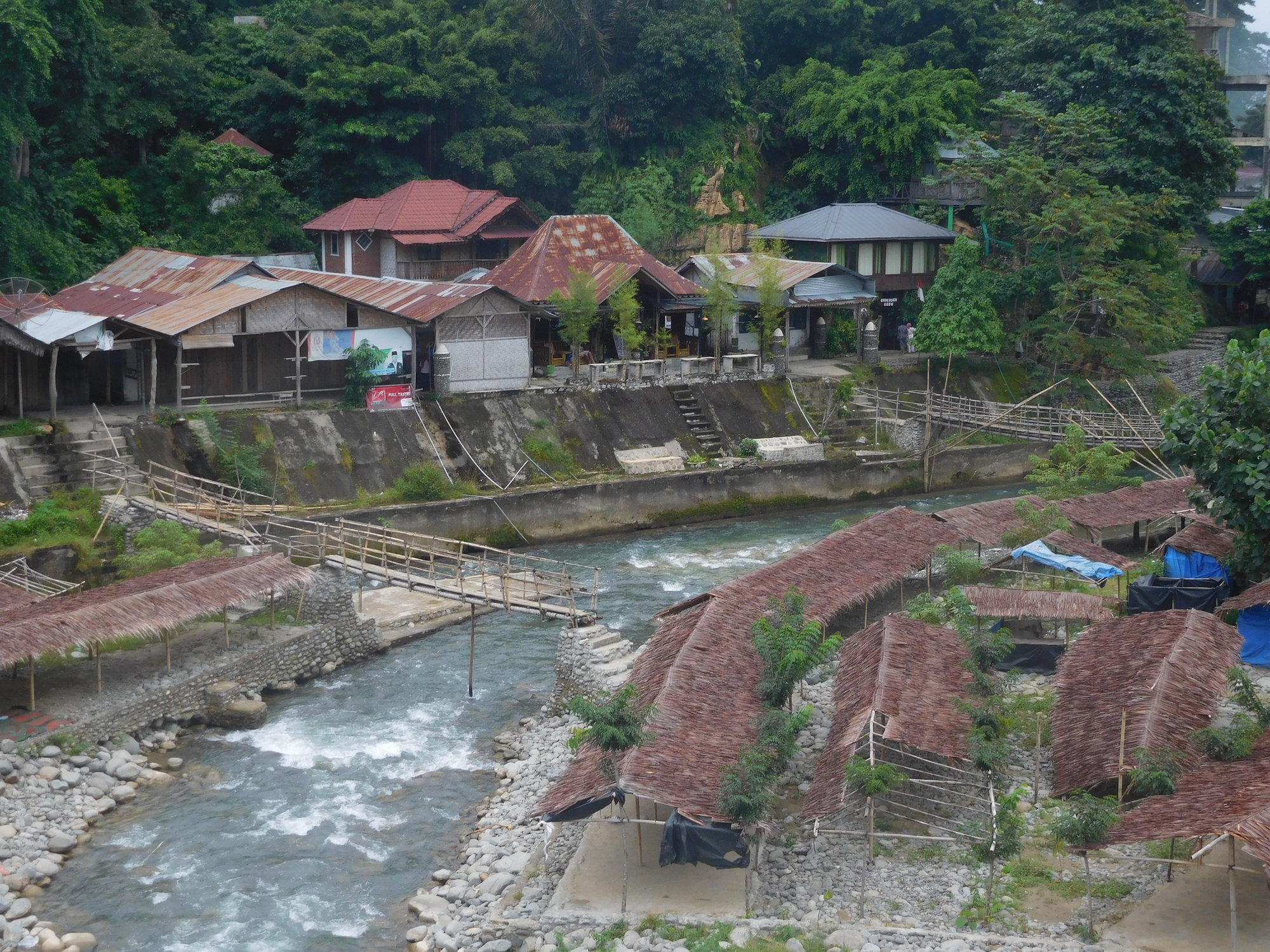 Gunung Leuser National Park covers an area of 7,927 km2, lies in the Barisan Mountains and is named after Mount Leuser (3,119 m). The National Park is part of the UNESCO World Heritage Site and is also one of the last two remaining habitats of the Sumatran Orangutans. In addition, the park also includes elephants, leopards, deer, tigers, rhinos and various types of monkeys and birds. 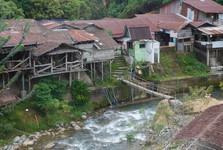 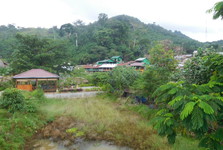 The closer we get to Bukit Lawang, the more nature prevails over cities. We pass through large plantations of oil-palm trees, but the locals are trying to regulate this production. The village of Bukit Lawang is beautifully nestled in the jungle. We have to go to our last Sumatra accommodation with backpacks over the shabby suspension bridge above the Bahorok River. Then we get to a nice terrace with refreshments and a garden where macaques run. It is necessary to prepare for the fact that they only let the electricity flow in the evening, so that it is not possible to charge or surf the Internet until then. However, after dark, electricity works well. In the stylish village there are several restaurants, a currency exchange and a small market. Prices are relatively different, but you can buy here very advantageously be beautiful colored scarves. Food is also cheap, so we end up with several courses on the terrace of our accommodation. However, it is good to find out the price of beer, the amount for us was quite a surprise when paying. 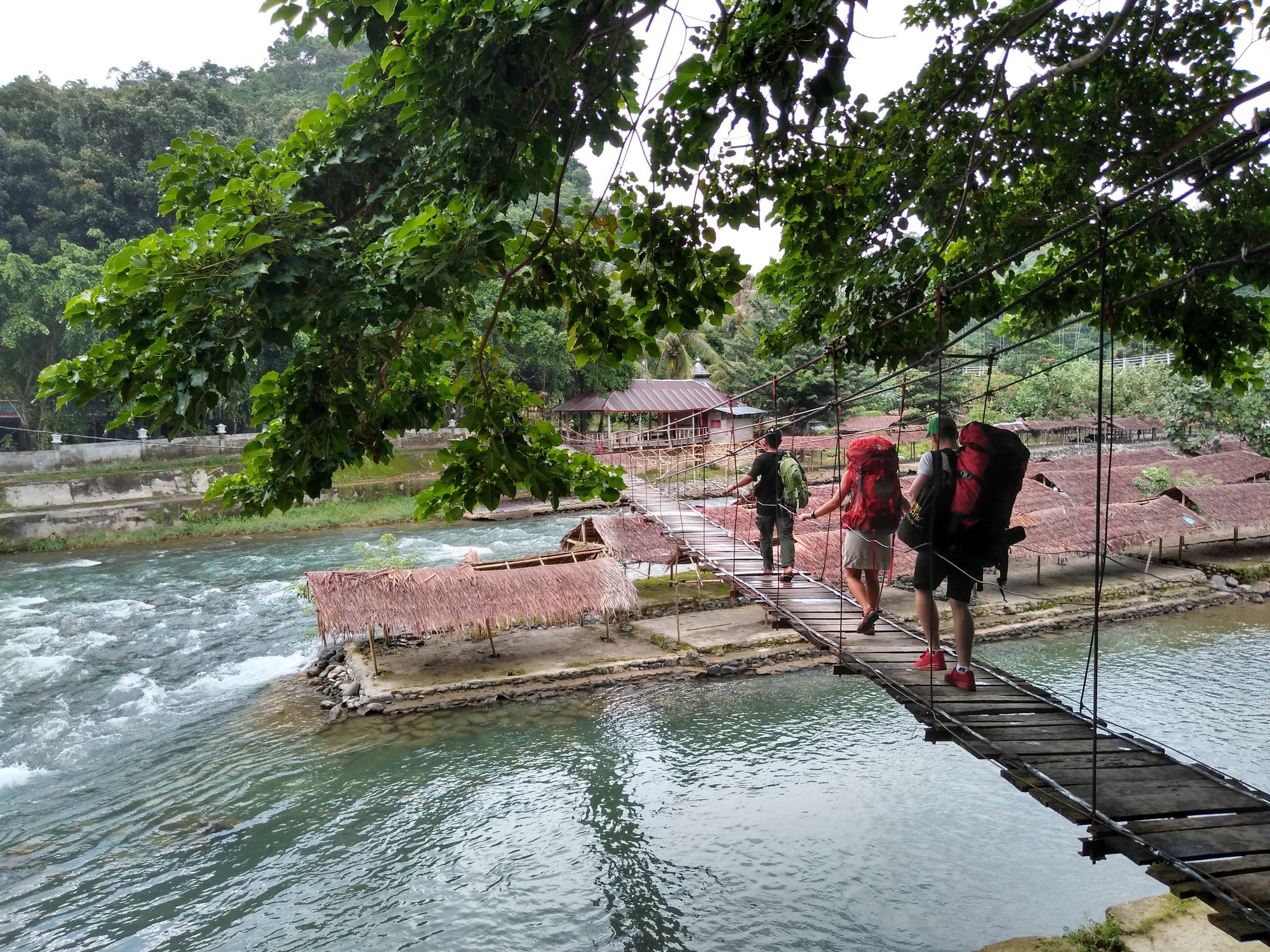 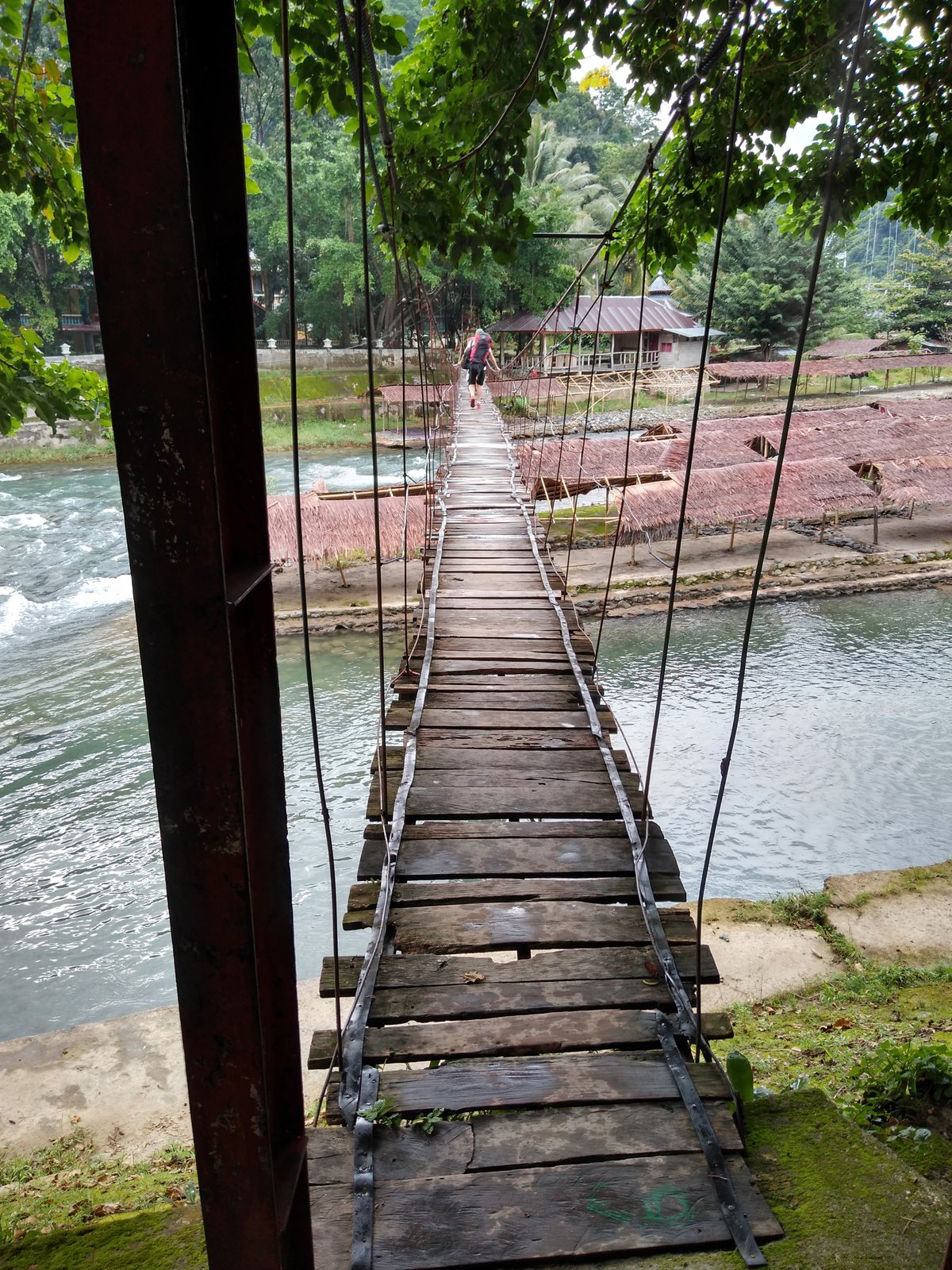 In the early hours of the morning with a guide to the jungle. To our utter amazement, after the first few steps, we are lucky to see a young male orangutan swinging on bamboo. He likes to come and take a closer look at us. We go on and meet some macaques and gibbons.

We have an excellent fruit for breakfast and go deeper into the jungle. We pass by huge forest trees and small rubber trees. Surprisingly, there aren't many leeches, but even so one member of our party is not lucky and two have to take off. We have a really beautiful sunny day and from time to time we have really beautiful views. Soon we meet other apes, this time mother with a baby and then another male. They like to climb us for watermelon. Getting in touch with this incredibly calm, beautiful and big animal is a real experience. 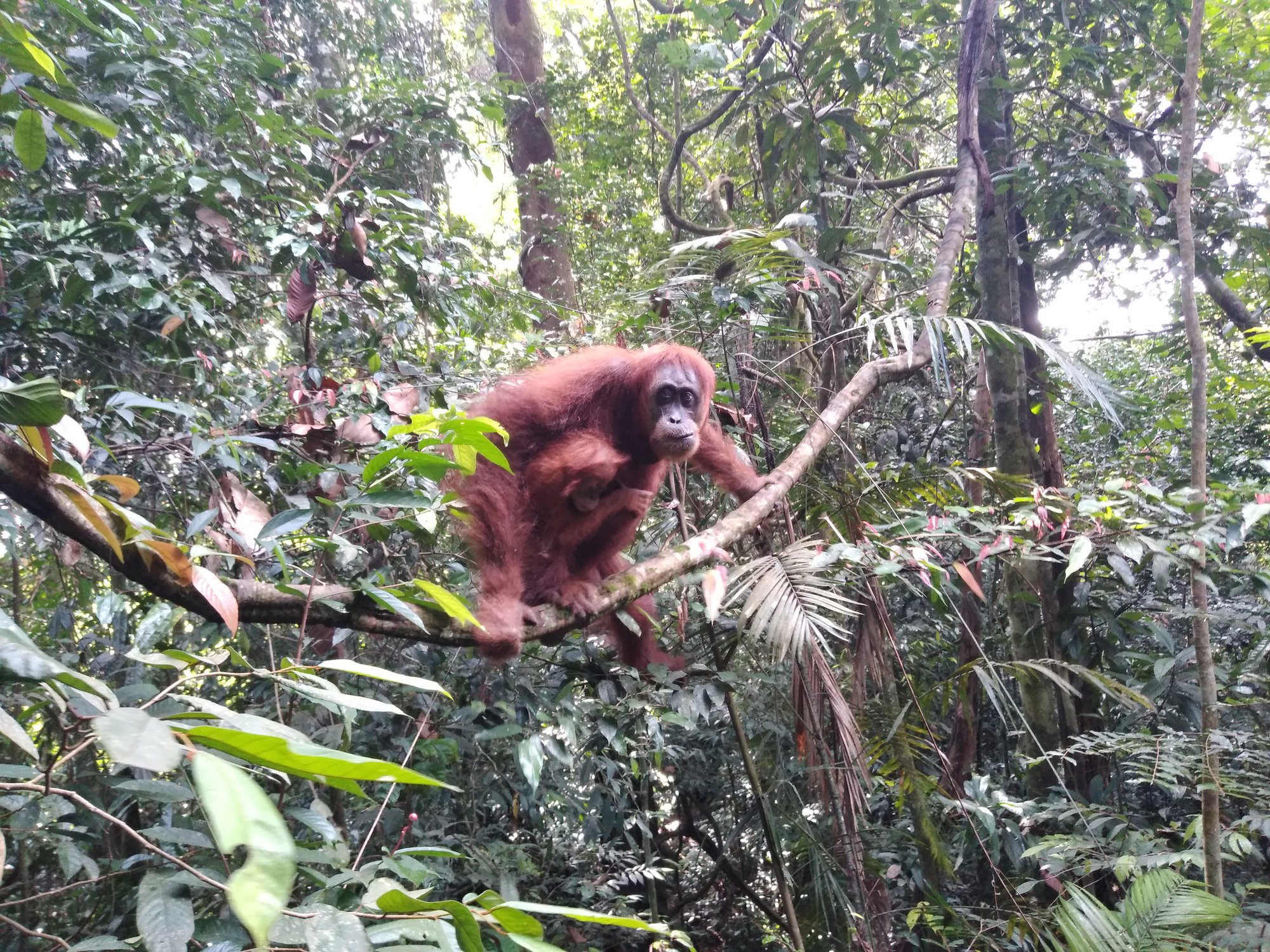 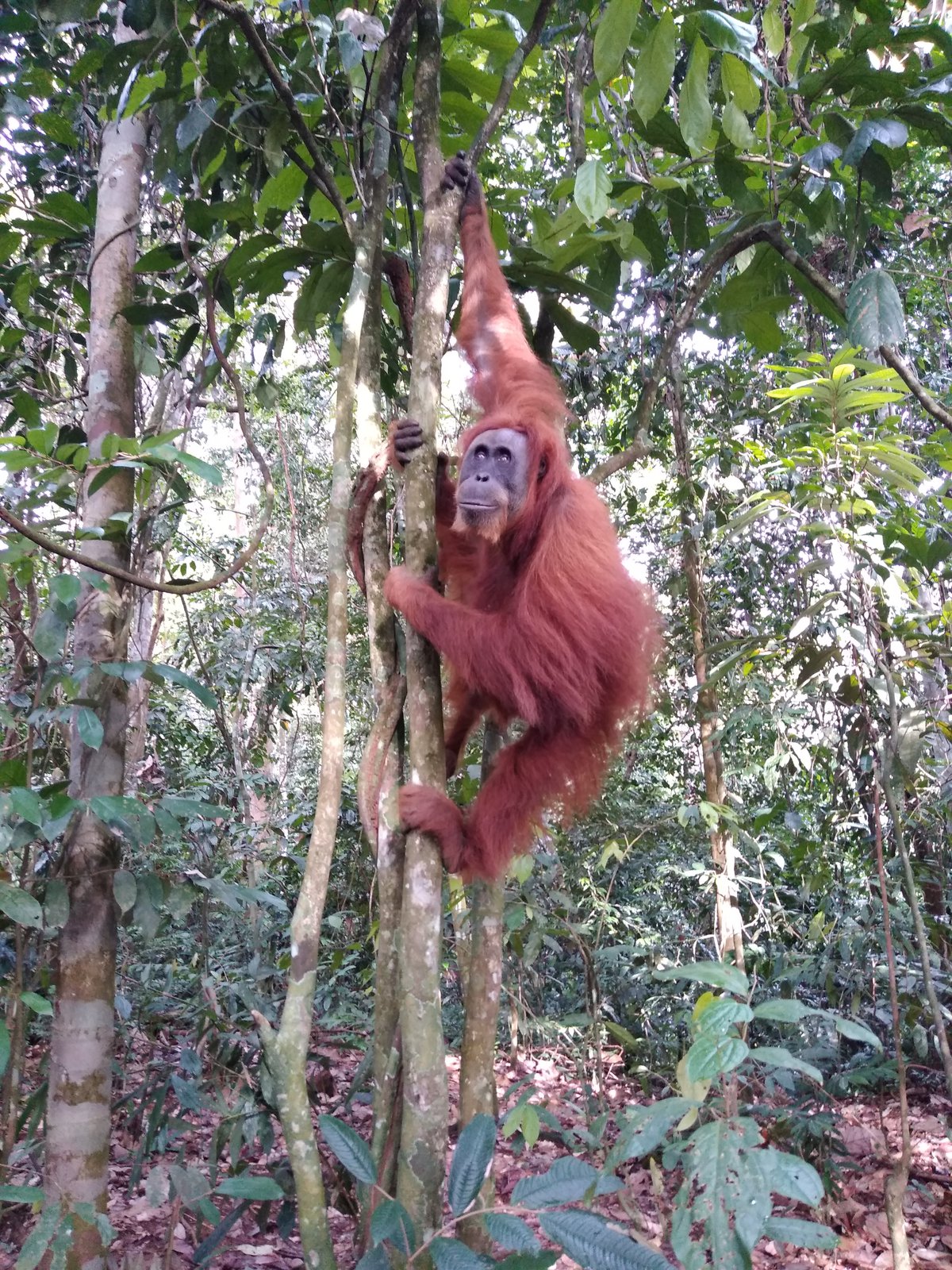