Nevertheless, this did not became a typical symbol of Irish metropolis. But in 2010, a very serious rival came in Dublin: it is gigantic Dublin Wheel, as some remote relative of London Eye.

The Town on a Palm

This wheel, sixty metres high,  situated close to Dublin Port, was solemny open for public just in the middle of the summer. And the constructioin drew the attention with its height. The wheel is attractive not only for inhabitants of Irish City but even the tourists have finally its temptation, where they can admire Dublin from bird´s perspective. They have the possibility to enjoy with ocean waves which wash the banks of their famous town, including near Howth Port. On the other side, they can see Four Courts, historical and characteristic Dublin building. From their visual angle, they cannot loose famous Croke Park Stadium, and Liffey-river below is running as thin but fixed and continual thread which could sew together Dublin shocks just from its birth. This gigantic wheel is a big attraction, which the town missed before, for sure. Anyway, it is a question how much it could be popular. 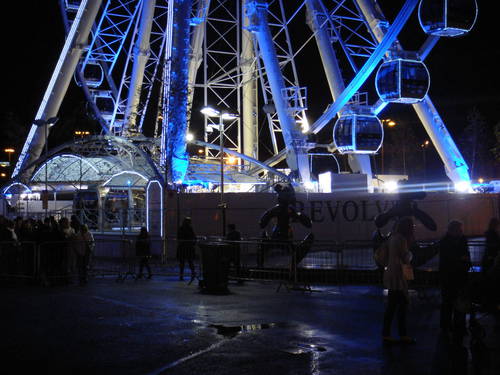 If the rain comes, we do not get wet

It is good proverb that in Ireland you cannot relay on anything, thanks to merry character of local people, while when your life is not in a danger, the essential matters are in question. Nevertheless, you can have one guarantee, for sure. At least, you will get wet, visiting this emerald island. And, frankly speaking, a rain, during your 13 minutes drive on Great Wheel of Dublin, could no be some pleasamt refreshment. So, the authors of this attraction decided that instead of open cabins, the tourists will enjoy covered ones (similarly, as they are applicated in the Alps) - where no rain  or wind can penetrate in. Moreover, on cabin roof, some push-buttons are fixed. Pressing it, everybody receives an information, where to look and what to follow. In similar way, you can press the air-condition or ask for help, if necessary. Inside the cabine, you are never alone.

A Wheel for VIP Persons

And what about the wheel itself? Nobody would enjoy a feeling of solitude. This gigantic construction bears 42 cabins, where totally 336 persons could enter. The weight of such colossus makes 35 tonns. When the system was got into operation, and shortly afterthat,  one ride cost EUR 9 for an adult person and took approx. 10 minutes. It is valid in this case, and it is less practical, to take a seat  in the cabin after dusk or just in a moment when dark sky predominates. You probably cannot see far but illuminated city has always its wonderful atmosphere, which will fully suit anybody. Anyway, in contradistinction to well known „Russian Wheels“, you can order  in Dublin even VIP cabin. But, frankly speaking, you get Champagne, and, thanks to glassed roof, you will have a look above, more comfortable seat, and even the music will be more pleasant, but the price EUR 75 or 95 would seem to be rather expensive. In such case, you  prever to give a song yourself, am I right?

A Help for Small Leprichauns

As a speciality of the whole action „Gigantic Dublin Wheel“ was  that it looked like that two attractions of the same character would be placed in the city in distance of one kilometer only! So, the Port of Dublin had the intention to construct one complex, and the same idea had Harry Crosbie, the owner of Irish O2 Phone Company. To tell the truth, this entrepreneur was more flexible, so the port gave up to realize such project. An advantage of this project version is a fact that it is situated close to great arena, where the concerts of famous musical orchestra (bands) are taken place. Moreover, a market is located there, which would become (according to the latest plans) the biggest complex of its kind in Dublin. The is a space for total 150 stands, and always at noon, rock musical groups would make their performances there, free of charge. So, in the future, from port, it could become a central point of young Ireland! Nevertheless, it is a question, what happens in case of actual economical crisis in the country. Leprichauns Land  and a Country of curly Shamrock could hardly suffer from such negative reality. Let´s hope that some magic - real or raising from Irish myths - helps this island. And the wheel-work of not only this attraction but also of complete green paradise would turn round ahead, and in pleasant way, as we are accustomed in Irish example. 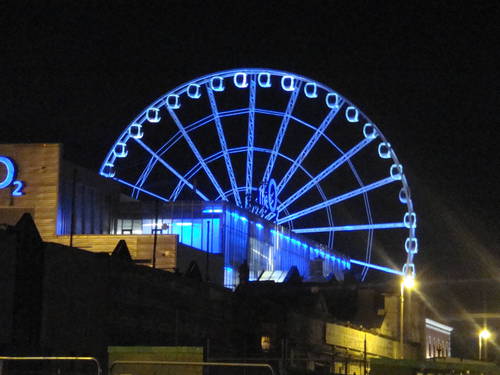