Where the world ended

In 1477, Christopher Colombus sailed there while heading to Iceland. It was when he tried to find the western route to India. On his way he stopped in the port of Galway; today, there is a statue of this famous explorer.
However, for a long time before he arrived legendary Celtic explorers sailed from western Ireland to the wide and open ocean. The most important of them was St Brendan (Brandon, or Bréanainn in Irish Gaelic), the patron of sailors also called “sailor”. According to legends, in the course of the 6th century he discovered Tír na nOg, „The Land of Youth “ in the Atlantic, a land of Celtic myths 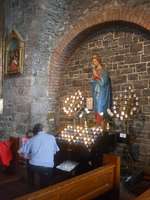 or the „Island of the Blissful “; it used to appear on maps until the 17th century as the „St Brendan’s Island “. Many people of Kerry located in southwestern Ireland, a place where St Brendan came from, were convicted that this legendary sailor discovered America ten centuries earlier than Colombus did

One of the highest mountains in Ireland got its name after St Brendan, Mount Brandon (952 meters). The mountain is located at the Dingle peninsula in Kerry county. Prior the aferomentioned saint took it to his patronage, the mount was devoted to Lug, a Celtic god. Annual pilgrimage tradition to this mountain originates probably in pre Christian timhis holiday took place before harvest. Despite the locals are Catholics, these traditions remained until the present in the westernmost part of Ireland.

Many will regard the height of Mt Brandon not impressive. However, we have to realize that the mountain rise almost from the shore It is hard to get on the top of it also due to typical rainy weather that is especially rainy in this part of Ireland due to western winds coming from the ocean and also the Gulf Stram. Visitors attempting to climb it, have to expect not to do it. Even more experienced tourists could be discouraged for in summer there is neverending raining and thick fog. You have to expect this while being on vacation in Ireland . 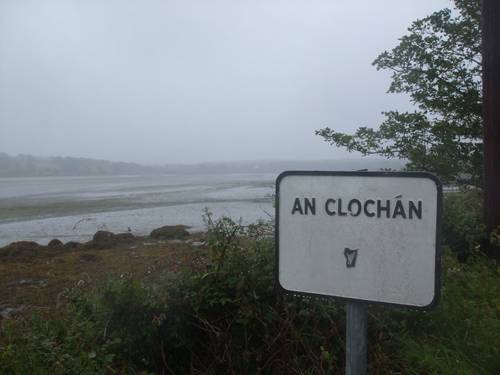 Remoteness, erudition, asceticism and… schizophrenia
Thanks to its remoteness , Ireland was occupied by Romans. Later, when the Roman Empire fell apart, only ruins remained. Irish monks preserved large part of antic erudition. Also strict asceticism of monks like St Brendan left its mark on Irish Catholicism and also on mentality of the countryside, mostly in remote communities. In the second half of the previous century, you might see such communities below Mount Brandon.
Predominantly puritanism and remoteness of the Irish countryside caused many psychic diseases that were regarded just as schizophrenia. This conclusion was made by Nancy Scheper-Hughes, an anthropologist, in her book Saints, scholars and schizophrenics . The publication was based on her two year research in An Clochán parish located below Mt Brandon. 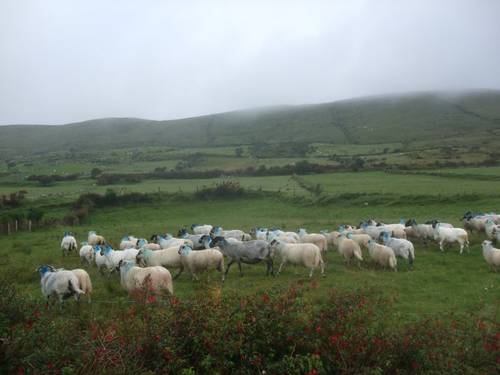 Reality of west Ireland countryside depicted on the example of An Clochán, a parish described in Scheper-Hughes’ book, is very depressive. Strict catholic upbringing, emigration of mostly young women to the cities, fell of traditional farm life caused that many young men were left in the parish withous spouses. Usually they tried to drink their way out. Due to this, many psychological diseases plundered these men and many ended in psychiatric asylums and were labeled schizophrenics. 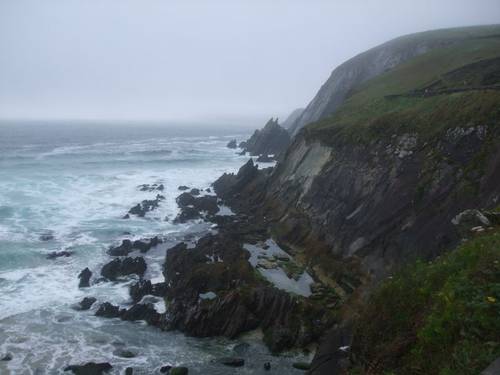 Cruel Mirror
Scheper-Hughes labeled An Clochán parish under pseudonym „Ballybran“, however someone found out its true identity. When locals read the book, they were outraged because it showed the parish as a dying out celibate community . Some locals even wanted the author to be shot dead. It was a threat that should have been taken seriously in the region where IRA enjoyed large popularity.
A tourist walking through An Clochán parish probably will not have a clue of a sad reality of this place 40 years ago. Particularly if he/she is totally wet after an unsuccessful attempt to conquer Mt Brandon, he would not be in a mood to learn about sad history of this place. The crisis of the 1970s is long gone but locals are troubled by an another crisis of 2008. Ireland was hit especially hard. Despite the houses below Mt Brandon seem to be ok, God knows what hides behind their walls…