So, now, we make an excursion to Ireland´s' mountains which are most accessible from capital Dublin. Wicklow Mountains are not situated too distant from there.

Even a Saint Would Become Mad

The drive from Dublin by bus takes approx. one hour but it is comfortable way, not taking into account winding roads, which move quite often bus chassis. Moreover, the first view from parking place towards top lets to forget your distress, you had to undergo during your drive. We wish to recommend you, to get a map in the inform-centre. Afterthat, you can turn your steps directly to Glendalough. It is a name of local valley, but, in general, it is a title of old monastery seat, established in 6th century by St. Kevin, formed as a centre of local education place of that time period. To tell the truth, it was rather difficult to make fine manners of local citizens at that time. We can hardly understand a fact that Kevin left soon such arrangement and moved to near cave close to the lake (this cave is well visible from the opposite bank). He lived there abandoned and alone. His successors brought him a foot by means of a vessel. The legends that with a food he could accept even women, Kevin refused with a fact that he returned back among the people, living together with them till his death. So, this is legend´s description. At present, the visitors´ eyes could see in Glendalough the ruins and periphery walls only. Anyway, round tower was preserved in complete state, jutting out as warning finger above the whole configuration. Attention, please: the intellectuals lived there, so all swearings and sins are not permitted here!

While most of people walk slowly aroung Glendalough and Lower Lake, making fire in prepared iron baskets, preparing for grill their weekend sausages, we climb upstairs and more distant. A way around the highest Irish waterfalls - Powerscourt - we climb ahead towards diversion from narrow, wooden path. It is hidden inside low pine wood cops, inviting us into fairytale, full of Irish elfs (Leprichuans) and their treacherous, but more tempting, friends nymphs. We forget the stories about a fact that these bearded dwarfish gnomes could be able to protect, treacherouly and malevolently, the Irish treasury, and so, we follow them. After couple of minutes of steep climbing, it looks like that we walked into their trap, to be guided to wrong way into mountaneous secret gaps, where we loose our mind, whereas they would be laughíng at us. Nevertheless, a wonderful outlook will be available in front of us. The forest is opening and you have the chance to enter into free space. It is similar to the fact as if Tim Robbins left (in film screen Redemption) the gates of Shawshank Prison. We respire, making some steps ahead to the top, looking around downstairs. 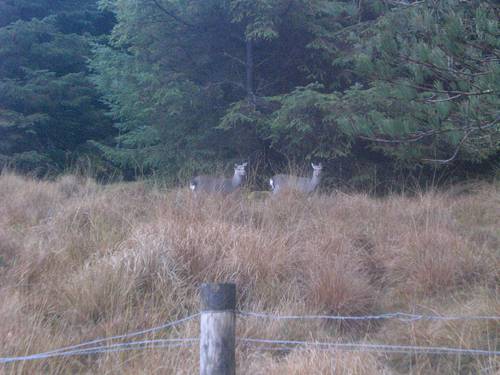 A path is winding below us. Small „ants“ downstairs make their Sunday walk and do not have any idea about our presence upstairs. With omniscient smile on our lips, which suddenly made from us - the prisoners - a King, we walk along the top ahead, following the scene below us. Only herds of European deers (it is nothing special to watch these animals there) could take our attention. The animals look like to live there from times immemorial, but it is obvious that they were imported there just within 20th century. It happened afterthat when the countryside definitely lost its original inhabitants - forest deers. These aninals were exterminated even during 18th century. On the other hand, a pint of good, black Guiness beer could seem as omnipresent, never disappeared matter from Ireland. And if this looks like as impossible, even a nature accepted this human product as its own. If we look downstairs from such steep hill once more, we find that even Upper Lake, placed directly under our post, has a form of a pint, including its compact yellow froth (foam). Do believe or not, nor Wicklow Mountains forgöt famous Irish hospitality, welcoming you for a pint of beer. And frankly speaking, you cannot resist to such temptation, for sure.

This offer cannot be refused

You can see that similarly as the French look for a women (Cherchez la femme), the Czechs are famous musicians and the Americans take four hamburgers in their bags, the Irishmen have their endless sympathy to a glass of beer. This drink could be on the same holy level as their wives. Where could be better understood such general rule as on mountain peaks, taking for a shield by Dublin inhabitants, protecting all negative winds to penetrate into their town? Yes, the mountains are everywhere in the world. But, would you tell me, in which mountain lake, you can be able to follow the waves of black Guiness beer? 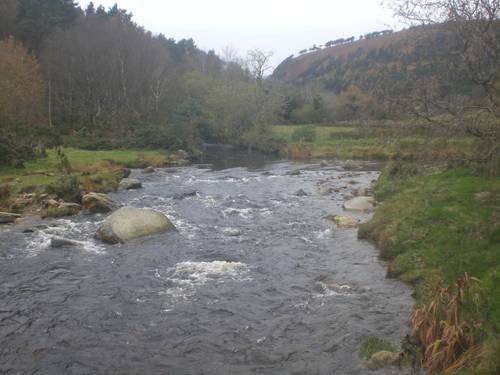