It is early morning, from the lake Achensee the fog is rising and before us is a long journey, that leads you to the Italian lake Lago di Garda. Our journey has one important stop, northern Bolzano, located on half way about 300 kilometres long trip, scheduled for this day.

On this route and we also expect more frequent than crossing the Brenner Pass, which is a holiday nightmare annual drivers from across Europe. Passo del Brenner, the sound of his Italian name, separates the Stubai Alps, Zillertal Alps at an altitude of about 1500 meters. The delay between the south and north of the Alps was due to its good accessibility from the times of ancient Rome, widely used trade route. The first official road that has led in 1772 and a hundred years later added a railroad. Almost exactly 200 years after the first road was opened here many familiar with the A22 motorway bridge Europabrücke that his height is 192 meters one of the highest in Europe. Who has seen the way described in the rain or the full holiday mode, certainly better skip this part, because drive through the narrow corridor with safety fence at eye lev

el and continuous queue of trucks and caravans is not just the right driving experience ...

From Brenner the A22 motorway continues to decline otherwise picturesque alpine valleys with many romantic castles and fortresses, guarding the former merchant trail then and now cosy vineyards, the harvest might not be other than excellent. The cooler mountain climate is already changing often hot sunny days, suggesting resilient especially red varieties, which gives rise to more than 25 kinds of mostly dry wines, each variety has its own specific microclimate terroir.

In addition of wine South Tyrol is also home to Schnapps, for us so much known as fruit brandy, that there is more medicine than drinking alcohol. Production of this sophisticated spirit came from the original farms and sheepfolds to big factories and cities, but it did not reduced the popularity of ancient traditions and the warm fluid that most tourists and bring as tasty as a delicious souvenir Grappa, also produced from many different grape varieties , giving the drink its specific softness and sparkle.

When I see this beautiful corner of the country, I think "Well, here 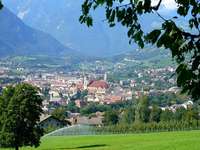 I would like to live to see ..." Well of course not on the highway sometimes awkward, like a snake that winds through the valleys to the cities Bolzano, Trento and ... Bressanone. Many of us this Italian name of the latter town say much of anything, but maybe you will know more, when we use the German variant of the name - Brixen. Yes, the history of Czech literature and knowledgeable certainly have to pay attention. Brixen is the place a four-year exile of Czech poet, journalist, and our first awakener Karel Havlíček Borovský. I do not know how many here have had to endure the Czech giant, far from his beloved homeland and Czech friends are re 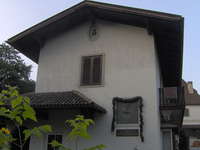 portedly never felt well and happy, but since it is neither forced exile.

A spa town with more than 300 sunny days a year, crystal clear air, surrounded by a wall of mountains, forests, meadows and hillsides Borovský was little, but certainly not unpleasant compensation punishment for sins committed against the rotten Austrian Empire. The ruling apparatus had no mercy, so Karel Havlíček 'enjoyed' Alpine exile just four years, between 1851 and 1855. Tuberculosis, which soon became fatal to him, but he neuhnal of challenging hiking hike, but she was infected with his wife Julie. In Brixen is today remembered him at least a plaque. What's the use, we must go further. Our next stop is the beautiful Bolzano and his personal visit to the most interesting guy - Ötzi the ice man!