en.infoglobe.cz » Italy: Alpentrip III. - A Visit to the Ice Man

From the Brenner Pass, we moved about 90 miles to the heart of the region Trentino-Alto Adige, whose centre is also except fully Italian Trento and relatively very German Bolzano, which is also the largest and the administrative capital of the province, also known as South Tyrol.

e roots of today's roughly 100 thousand town, date back to ancient times. For most of the year and especially during the spring thaw turned into a narrow valley and impervious to some extent uninhabitable marsh fed by frequent floods. More important medieval city brought up shop at the Venice-Augsburg merchant trail, one of the most important Alpine corridors between north and south Europe. From 12 century there arose stately homes and castles, many of which have been preserved to this day and we are so admired during a tour of the main motorway route. From that time also preserve one of the most important monuments of the city - the Gothic house. The medieval part of the city with a square, named after a famous poet Walther von der Vogelweide, lies in the shadow of the Gothic Cathedral of the Assumption of the Virgin Mary, a symbol of South Tyrol. Her visit was definitely worth it! Admire the medieval frescoes from the 14th century numerous paintings depicting scenes from the lives of saints, and important religious figures or legends. The dominant building of the whole city is the 65 m high sandstone tower from the years 1501 to 1519 according to a design by architect Burkhard Engelberg. The interior is also decorated except by numerous paintings and also by unique sandstone pulpit.

We, however, continue on to the centre, which is well achievable including automobile, respectively

by walk from one of the many parks or reserved parking houses. After about 10 minutes of walking through the pedestrian zone, surrounded by countless shops and stores nicely hidden in endless arcades, we come to the museum relatively inconspicuous, hiding one of the most important archaeological finds of the area. And it is none other than Ötzi - ice man, who was very devoted to the fourth floor of the local museum.

An "adult" ticket € 9.00, or € 7.00 per student ticket, you can enjoy a truly extremely impressive tour of life, death and find this over 5300-year-old hunter, whose tomb for thousands of years became the mountainside on the Austro-Italian border, where he was in September 1991, a pair of German tourists found hi

m while turned back from an Alpine tours. Initial finding half a frozen body protruding from the ice masses told that it is a climber who was in this area for a long time missing. But according to experts, and thanks for transport to Innsbruck University, the shocking facts we found out. Unfortunately, improper handling and initial efforts of the body at any cost extricate using ice axes and ropes led to less damage to the hull mummy, his hunting clothes and gear.With such information, interactive tour of the museum let you know.  In addition, the body itself, enclosed in a freezing box, history will speak to you through valuable artifacts are preserved as part of the weapons, objects of daily us 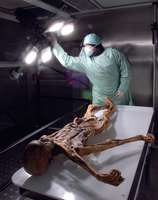 e or ingenious mountain clothing and equipment, forming a unique testimony of the Chalcolithic period. Anthropological and forensic (investigative) part of the exhibition will introduce you to the origin, the most likely way of life, disease and possible causal Ötzi's death, which allegedly was premeditated murder! Originally hunter had perished during a sudden snowstorm, X-rays, however, revealed under the shoulder blade arrowhead, which was hit by a considerable distance in the back, therefore, out of direct fight.

The third and last expertise speaks about fatal skull fracture and brain injury, which arose subsequent fall and strike a rock promontory or skirmish, during which he came that deadly hit a stone. Ötzi's mummified body is still the inexhaustible source of information and issues associated with it. But one thing is certain. Definitely worth any of them personally reveal during a visit to this unique multimedia exhibition, which ends 13th of January 2013.