When we, in the last part, left the beauty of the northern Italian Bolzano after a visit to the impressive ice man, was left to us the first major stop exactly 100 miles and about an hour away from a somewhat monotonous valley in the heart of the Trent region, which gave the name of another city on the route - Trento.

This university town, which was declared in 2007 even the purest Italian town, but we did not vis 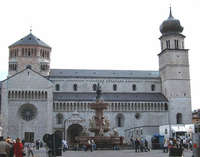 it in person, so you can´t convey specific impressions that would preserve us could. But what can I say, in South Tyrol probably find a place, which could say something wrong. History of Trent it is very similar to other cities on one of the busiest trade routes between Europe and North transalpine Mediterranean. Originally a Celtic settlement soon passed under the dominion of the Romans, who this strategically advantageous point on the route between Innsbruck and Verona advanced to the town, which was named Tridentum, according to the three surrounding mountains rich in refining the ore.

European importance the city received again in the middle of the 16th century, when it hosted the Council of Trident, a major meeting of religious leaders of his time, who set the rigid religious dogmas and regulations of the Catholic Reformation. In these decades, Trento became a Catholic at all the most important centre of Europe, and thus related to extensive construction of sacred buildings in the Renaissance style. Episcopal city li

ved in peace and abundance to invasion by Napoleonic troops - when was the year the 1796th Followed by connecting to the Italian kingdom, that subsequently in 1815 the region accounted for the majority of encroaching the Austro-Hungarian Empire. All these changes, reversals and substitutions leading parties were more for the benefit of the city itself, which thus acquired the seats up disparate architectural attractions, which is dominated by several churches (such as the Virgin of the Snows, St. Lawrence and other saints) and especially sv.Vigilia cathedral, originally Romanesque basilica, which took place in most church councils. Interesting is also the Gothic bishop's castle, Castello del Buonconsiglio literally, which was for decades the leading home trident´s clergy. 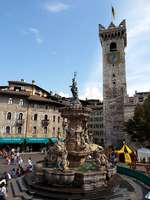 Trento is certainly worth a short stop, provided they therefore want to continue to pay tolls and parking, but we did not pay him much attention, because the proximity of Lago di Garda lake was felt over the wall of surrounding mountains.

After about 40 kilometres A22 motorway on the southern outskirts of the town of Rovereto our GPS already reports the turning. Passion rises and before us is only last few miles of our tiring journey. Several switchbacks, dose patience with a number of residential supply and we have a beautiful view on the northern edge of Lago di Garda. Nothing in the world at that moment beats the sight of a narrow strip of endless waters of the lake, fading in the haze somewhere in the distance. Villages on the slopes of steep rock walls, peaceful resorts with hundreds of small sail cruising waters of one of the most beautiful European lakes. But more about it next time ... 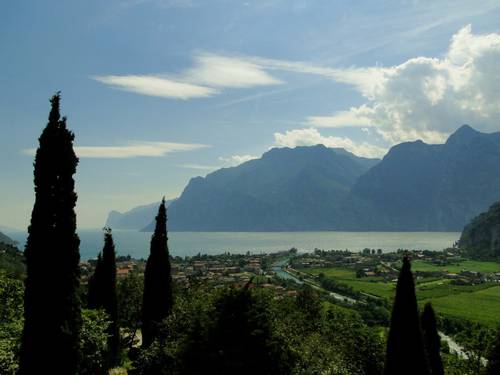