In the last part of our Alpen trip we get the northern edge of the lake that welcomed us almost by seaside atmosphere saturated with sun humidity climate of summer evening and scent of blooming flowers. It's amazing how in a few miles the Alps can change, but as we know from previous experience here can also strike unfriendly mountain climate. But we don’t feel it as our problem and therefore we are going to find a camp-site, which would be over the next few days became our home, and also an ideal starting point for next planned hiking trips. 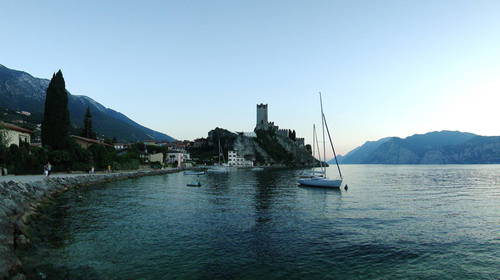 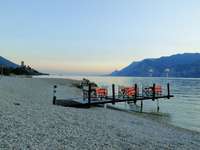 The top of northernmost shore Lago di Garda is made by two tourist resorts, which can be seen as one interconnected whole city. They are older and larger Riva del Garda's with historic centre full of tourists and more on east lying and calmer Torbole, with great camping and beaches ideal for windsurfing. Torbole is also a kind of crossroads, insofar we want to go down the east coast through the Campagnolo to Malcezine - romantic town with a fortress on a rocky promontory, whose evening images might not be missing on any flyer propagating holiday at this lake. 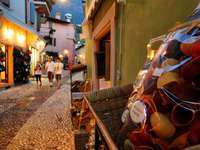 with  houses on wheels. Previous experience we hinted that the ideal place to anchor one of the camp will be among the last mentioned centres, therefore Campagnolo and Melcezine. Camps there are several, and what equipment to virtually all comparable. Unfortunately, their capacity is already at the end of the second week of the holiday rather limited and so many have no choice but to take, it is. But we were lucky and the first stop at Camp Campagnola was a success. Smaller peaceful camp on the hillside with a relatively satisfactory background several showers and clean toilets, central building with a s

mall snack and a beer, paid Wifi (1Euro/60min) and excellent access to water.

Camp sites in this area is also ideal for walking through the picturesque streets of night Malcezine as well as to a unique cable car station, that in rotating booths exports tourists and cyclists on the famous ridge of Monte Baldo, where you can just go for a few walks and panoramic demanding trekking tours . Rotating canopy but go up from station San Michele and therefore we recommend go to the very top and then take a walk and meet just the first station of this remarkable lift.

As we have already mentioned, the Garda and its surroundings are a paradise for cyclists of all levels. Multiple routes are located here at altitudes from 60 to 2000 m above sea level, from the most d

emanding mountain roads downhill runs, so here is something for everyone. A separate chapter on holiday Garda could be talking about the local water sports options that windsurfing dominates.

Lake for its ideal weather conditions became literally Mecca for the sport. Who was ever ride the board, must go to Garda. Unfortunately none of our trip was not so active surfer, in order to give an accurate description of the east of the local environment, but due to the virtually relentless whirl of water enthusiasts, beginners and masters of the sport there is no doubt that, windsurfing or kite - surfing there you can really enjoy!

In the next part we will visit night Malcezine and head towards the half-day hike to the mountain village Pregasina.