We have completed the first day on the Garda. So far we have seen some of the most exciting places in the northeast shore, we did a small walk and generally mapped out

everything there offers active tourists. Spectrum of offers is for everyone, really! From children to seniors, from lovers of water sports for lovers of hiking, biking, surfing and who knows what else.

Just a little bit, however, we have mentioned the lake itself, which was soon corrected. Lago di Garda is the largest Italian lake, with an area of ​​almost 370 km², a length from north to south and a width of 52 km in the southern part of almost 17 kilometres. The maximum depth is 346 m length of coastline is less than 160 km.
Though the north part of the lake is still part of Alpine foothills and there are almost Mediterranean climate, which, furthermore relatively high summer temperatures also brings a wide range of wind gusts. There is even talk o 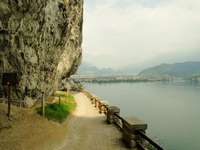 f nearly fifty distinct winds that are specific to a particular time of day, location and direction of flow. Examples include the southern breeze Ora, who every afternoon brings to the northern coastal area of ​​pleasant temperatures. Fauna is also a very rich and diverse flora is then merely a consequence of this climatic phenomenon.

Deciding which sport or activity in Garda pay attention, it is not easy. However, if you are travelling without heavy backs and the lake is just stop for a few days, as in our case, offering you especially hiking, insofar therefore do not wish to rent a surfboard or mountain bike. Perhaps the biggest attraction for demanding tourists, is already mentioned several times Monte Baldo ridge with numerous hiking trails. Of course, a beautiful imagine of all day trip that can quickly evaporate when the Monte Baldo for your whole

stay hide the heavy clouds. Dream panoramas from the local terminal leaflets take as their own and you have no choice but to look for alternative solutions. As already guessed, we were we seeing this unfavourable atmospheric phenomenon. Admire panoramas as in the famous Czech comedy about Homolka family, we didn’t want for the price 40 Euros, and so plan B came out.

Because of our location between the-Campagnola resorts of Malcesine and Torbole, it is suggested to output to Pregasina village, situated on a steep cliff above the north-western edge of the lake. The ideal place to start output is known spa town of Riva del Garda. After visiting the narrow streets of the historic centre and a smaller port, which is also an important stop several ferry lines and cruise liners, may eat for one Euro espresso and already we seek a narrow path, winding up a rock wall further to the

south. Less than 200 meters from the port already being marked and later while trail Strada del Ponale. On the first few kilometres there is waiting for us quite reasonable constant climb and some really large tunnels excavated in the rock at the end of the nineteenth century. With increasing altitude, which is still relatively low numbers opens up for us a really impressive view of the entire northern edge of the Guards. Riva and Torbole we are at your fingertips. Information boards then tells us that she and many dusty places and overgrown path was still in the 30 the last century, the access road to the lookout luxury restaurant, from where they are now, like the once unique roads, only the decaying remnants of the bygone glory. Even this pleasant walk with many overviews has its disadvantages and these are often reckless cyclists. Several times we were almost forced to dodge at the last moment before crashing off riders who are here now in several languages ​​explaining that at least partial consideration for slower pedestrians does not diminish their attractiveness hence quality sports ...

Jus rare biker can enjoy all the attractions of the local landscape and surroundings, not to mention the fact that the gravel surface and decrepit, often sunken lining above the deep escarpment are not a guarantee of safety for either party involved. The Strada del Ponale you pass several strange rock shelters, some kind of strength, whose history will tell us some of the info boards. We learn from them that the strange rock formations, windows and niches or gallery, were under the Austro-Hungarian part of a comprehensive defences system against attack by Italian Garibaldi's troops advancing north to the border of the nearby Austrian Empire. This ingenious bulwark in the same way also served in the First World War, before gradually lost its importance, but in contrast to the access road and the panoramic restaurant at the time the tooth of time signed relatively little bit.

At the end of the trail is already waiting Pregasina, quirky mountain village with a few tavernas, a hotel, a private vineyard, a small cemetery with a church. From there you can then continue to the relatively challenging descent into Limone or go back to Riva del Garda same way.

This way spent half day of course can´t be compared with possible alpine expeditions, where there really will find countless, but less inclement weather (poor visibility) is one of the few options that will not cost much and nothing at the same time offers many attractions and experiences.