For one day a little bit bold plan, considering that in addition to all-day journey, including at

least a short walk around Verona, we still await the evening tangled streets of Venice at night. But what's the use, the plan is a plan that should be at least partially keeps. We are still by Garda and waiting for us last night. What to do then? After certainly busy day, when you may have tamed the waves on a surfboard, conquer the surrounding slopes or went to try adrenaline canyoning, you will be rewarded in the form of a sumptuous dinner at one of the local restaurants. Here I would like a little tip, where to go, if you want to taste something really delicious. Right at the beginning of this recommendation will calm down, this gastronomic visit will definitely not ruin, respectively no way cause appreciable adverse effect on the holiday budget. Near our camp at Campagnola is famous Ristorante Da Bianca. This outwardly relatively unassuming family restaurant offers real sumptuous delicacies, though not within common Italian culinary tradition. Whether you anything from local delicacies, you will not be disappointed. Home kitchen at its best sense and fresh ingredients – all of these is in reasonable prices from 6-15 Euros. Famous speciality Da Bianca are undoubtedly spaghetti allo Scoglio. And what do you imagine this name? I guess everyone

Mediterranean traveler ever tasted or at least seen dish with extension Frutti di Mare, a seafood. Whether pizza or pasta covered with a mixture of seafood. Yes, seaside classic, often outrageously overpriced mix thawed creatures from the other end of the world.

But here it goes differently, and after the first few bites of shells and prawns is clear that these little creatures, perhaps even morning swam in the nearby bay. Really large portions of seafood and homemade spaghetti you here will cost 15 Euros, which is due to offered perhaps more interesting affair than two pizzas somewhere at the booth. Da Bianca restaurant we visited several times, because rather go so to speak, for sure, and certainly we have never been disappointed. If you will be in these places, stop here, you will not regret it.

I got a little carried away, but now it's time to go. On the way around the lake it is good to get up earlier

and go until the road and the town are not full of crowd of frantic tourists, those he had in this part of the journey you take enough. It's a little after nine, and the column direction for Malcesine Brenzone - Torri del Garda Benaco and begin to thicken. After an hour's drive to the south will speed 40 km/h comes as a shuttle launch. Cyclists overtake you that you have not missed when maneuvering through compromise and caravans sometimes can´t even see how the surrounding landscape slowly changing. Ridge of Monte Baldo is past and grip the rock band has also significantly eased. Lago di Garda and villages on its shores in the southern parts of recall after all more typ 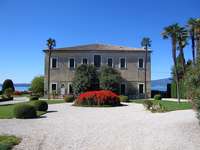 ical seaside resort, than something that was before almost 40 km alpine lake.

On this very lengthy section, you can stop anywhere, such as in the town of Garda, the smallest community in the Veneto region. Community with several narrow streets, a palace from the 14th captain century, several churches, and especially Brenzone Villa, located on the peninsula of San Vigilio you as a place of quiet rest visited for example Tsar Alexander, King of Naples, Winston Churchill, Laurence Olivier, King Juan Carlos or the British royal family ...

Your unobstructed snail moving along the lake, however, this stop could delay, same as us, because that one day you catch a lot. Choose as the first target today wandering Sirmione peninsula in the southernmost point of the lake over time seems like a very wrong idea, but the plan must comply with, and when we're here ... Maybe after two hours driving we did opening 60 km of 300 scheduled for this day. Sirmione at first looks like as one big very crowded parking. No matter, find the last space and go to the harbour, which supposedly hides the most important building of northern Italy. Roman villa Grotte di Catullo (Grotto of Catullus in translation) comes from the first century BC, when it became the seat of an important family of Verona, and apparently stayed there the famous poet Catullus, whose famous poem includes these short carmen (Latin poem) 85: 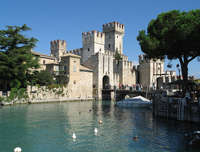 I do not know. But I feel that this is so, and torturing yourself. "

In addition, this villa in Sirmione is also important fortress Castello Scaligero from 1278, when it was the ideal location for a major strategic point of the Garda lake.

In Sirmione today's episode ends, to visit beautiful Verona at least for a while in the next part of our pilgrimage, and be closer to Venice.