en.infoglobe.cz » Italy, Amalfitana – To the Sun on the South of Italy I

Today we focus on Amalfitana. It is a 48-kilometers stretch of coastline lined by SS163 road. You ask what makes this road so special perhaps. The reason is pretty simple. You would hardly find a better road for a roadtrip. It is carved into cliffs cut by deep gorges. The road lines the coastline high aboe the Tyrrhenian Sea. Prepare to take a lot of pictures.

If you have any experience whatsoever with Italian traffic than you might perheps not feel like driving there. Well, when driving you might not enjoy the scenery much. Better option is to take a bus. It is a good alternative for ubses stop at towns where you may just step off, maek a tour, have a lunch or coffee and go on.

One more alternative is walking. Trails criss cross the coastline as well as stone stairs, and anceint mule trails. Take a  walk in forests, lemon groves, meadows, walk through small villages and enjoy vistas over the sea from everywhere. 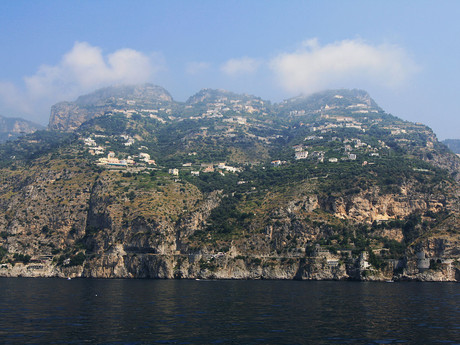 Positano is the westernmost town in Amalfitana. You will fall for this town right away. It features quiant colorful houses stretching uphill above the sea. Santa Maria Assunta church completed in the 13th century is the main sight here. Its dome consists of majolica tiles. Inside there is Byzantine icon of a black Madonna brought there by pirates, at least according to legend. You can hire a boat, paddleboat, sailboat or motorboats. Alternatively, you can buy a ticket for a cruise. 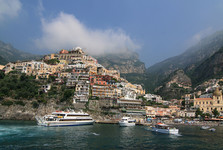 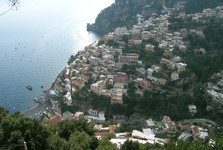 Next we take you to Amalfi town. It sits right at the mouth to a deep gorge. The location makes the town one of the most popular destinations in Italy. Legend has it the town was founded by Emperor Constantine the Great. In the Middle-Ages it became an independent state which traded with the Orient. Amalfi had risen to prosperity so much that it rivaled such powers as Genoa and Pisa. 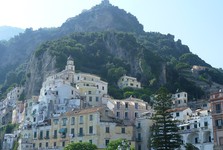 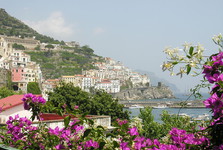 To learn more about the town visit the Municipal Museum housed at the town hall, easily recognizable for its mosaic facade. Items on display inside the museum focus on town's maritime history, old maritime tools, maps, and documents. Tabula Amalphitana is a 12th century constituting maritime law which would survive couple of centuries.