On the left bank of the Po River, in the middle of the Lombardian Plain, the town of Cremona welcomes us. Originally, it was a Celtic (Gallic) settlement (400 BC), later a Roman colony (218 BC) which was plundered by Emperor Vespasian's troops. As the military base of the East Roman (Byzantine) empire, it became one of the largest cities of northern Italy in the 6th century. 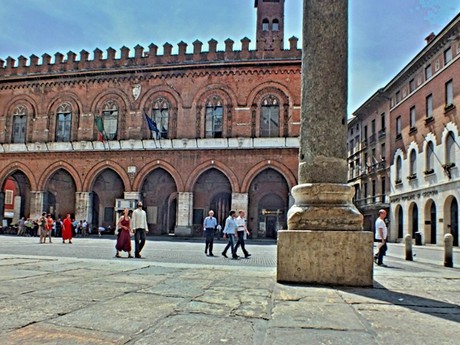 In the Middle Ages, the town was devastated by barbarian tribes. Every year, on June 29, in memory of the victory of Cremona over Milan in the Battle of Castelleone (1213), the San Pietro feast, which culminates in the fireworks at the River Pád, takes place. However, Cremona enjoyed freedom only until 1334, when it was seized by Milan. Until the unification of Italy, these two Lombard cities had common fate. 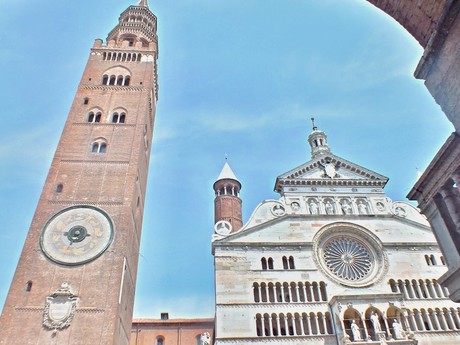 We went to the heart of this small town, to Piazza del Comune. Here is the symbol of the town, the highest medieval bell tower in Italy - Campanila Torrazzo. With its height of 112.7 meters it is also the third highest in Europe. As the Latin proverb says: "Unus Petrus in Rome, unus Portus in Ancona, one Turris in Cremona" (One St. Peter in Rome, one port in Ank, one tower in Cremona), this tower becomes our point of orientation in the quiet streets town. 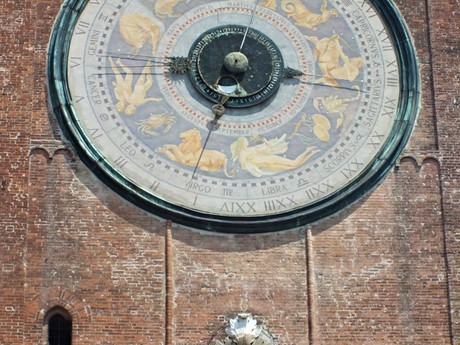 The campanila built between 1230 and 1309 ends with marble spikes, and huge bells leave for the fourth floor of the bell tower. This father's and son, Francesco and Giovanni Battista Divizioli, who built his mechanism, inspired this greatest astronomical clock in the world with the zodiac sign and the sun with the moon. The bell is surrounded by seven bells, each devoted to one holy and special patron of the city, the merchant of Saint Homobonus. For a fee, a wide view of the city can be seen from the top of the bell tower. The tower does not stand alone, but the Renaissance loggia is connected with the Lombard-Roman cathedral of the Assumption of the Virgin Mary - Duomo di Cremona. 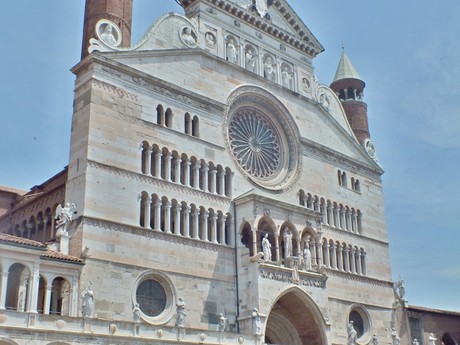 So we move closer to the church featuring a marble facade that reflects elements of all historic architectonic styles. This church was built in the 12th century and was completed in the Renaissance period. At the entrance, we are welcomed by two pink Romanesque lions of Verona marble. Porticus is decorated with a statue of Our Lady and the Saints, and a huge rosette from the 13th century stands out over the main portal. The interior of the temple is decorated with Renaissance frescoes or Flemish tapestry depicting Samson's stories. Also valuable are the choir benches inlaid with platinum (1490) and organ (1879). 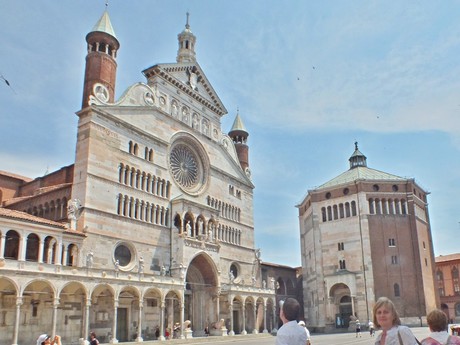 From the cathedral we continue on the square to the octagonal Baptistery of San Giovanni Battista (1167). This 34-meter tall building of brick bells carries elements of Romanesque style and Lombard Gothic. Its facade was modified and lined with marble during the Renaissance period. The interior is finished by a dome through which light penetrates through the middle. Above the altar of St John is a crucifix (14th century) and two wooden statues depicting St John the Baptist. Philip Neri and St John the Baptist. At the ceiling is the statue of Archangel Gabriel. In the center there is a large water tank (Lorenzo Trotta, 1531). In this tank during the Easter vigil the bishop blessed the water, which was then delivered to the parishes.
But let's go back to Piazza del Comune, one of the most beautiful medieval squares in Italy. The monuments we have been able to see have been linked to the church life of the city, but on the opposite side, side by side, stands with buildings representing the secular and political life of the city.
One of them is the historic Loggia dei Militi - Loggia of Soldiers, one of the oldest buildings. The inscription on the board located on the facade of the building resembles its year of origin (1291). In the past, the richest and most important inhabitants of the city and urban nobility met. It is currently a military monument. 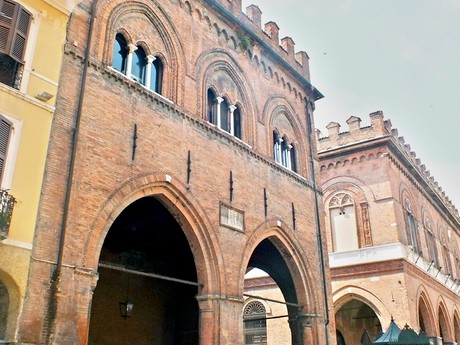 We gradually disappear in the arcade of another secular building dominating the square, is the Palazzo del Comune. The medieval town-hall was built in 1206 in a typical Lombard style. It preserved its style well into the 15th century when a marble balcony was added. The present form has been built since 1838. The vaulted vault we walk through is decorated with wall paintings with a coat of arms of the city. Here is the Visitor Center.

Cremona has many sacral buildings from the Middle Ages, but our next steps will be to discover her tradition of violin making. But we will leave this topic for the next week.