en.infoglobe.cz » Italy: Grazzano Visconti I – History of One Unusual Place

This picturesque medieval town belongs to the Vigolzone, approximately two kilometers away, in the Emilia-Romagna region. Although Italy hides many world-famous and interesting corners, I have never heard of this town before, so my curiosity has steadily been growing. 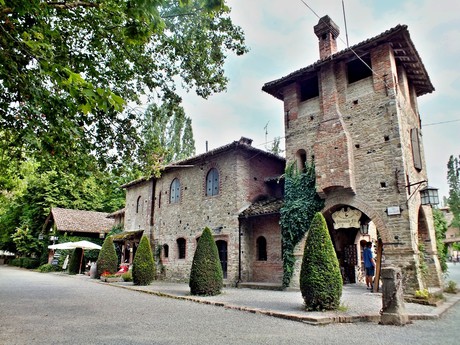 A small town or rather a village was built in the 14th century, and although the buildings look authentic, it is only a reconstruction of the whole settlement. However, this does not diminish its attractiveness. 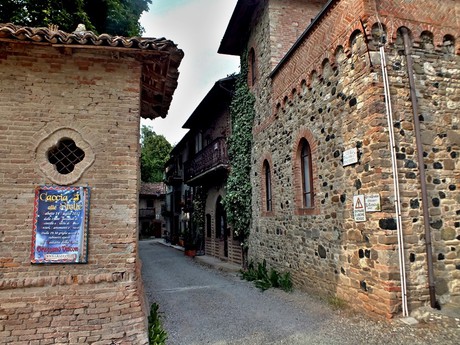 The name of the village already indicates its association with the noble family of Visconti. The original was built around the old castle of Castello di Grazzano Visconti from 1395. The first Milanese Gian Galeazzo Visconti issued an edict to allow his sister Beatrice - the wife of the nobleman Giovanni Anguissola of Piacenza - to build a castle. They settled here and with their children, and the Anguissola family was here until 1870. After the death of Count Philippe, because he had no heirs, the family died out. The castle was transferred to the family of his wife, Fanny Visconti di Modrone, who are also its current owners. 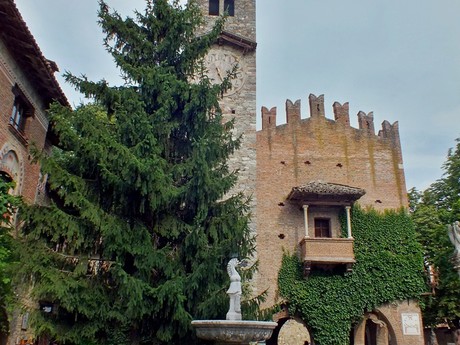 In the early 20th century, the village was renovated under the leadership of the Duke Giuseppe Visconti di Modrone, the father of the famous director Luchina Visconti (director of films such as Obsession, Earth Trembling, Death in Venice, Rocco and his brothers Ludvik). 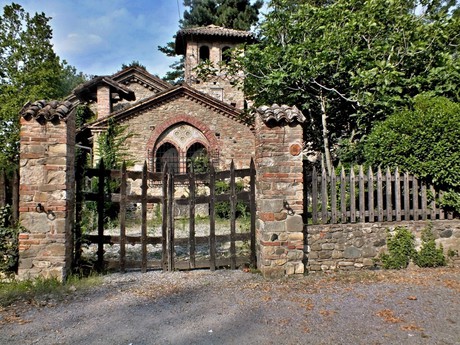 A medieval castle with a park in the middle of the fields would not, in this farmland surrounded by modern farms, in itself give such attention. Giuseppe Visconti, however, let not only revive the castle, but also ordered to restore of the half-broken houses, the main square, the tower, the fountain, or the former mill. He cared about every detail. This family was one of the richest nations in the north of Italy, so the resources for such a magnificent plan were not missed. Inspired this place a new life and the unique atmosphere of a former medieval town. A beautiful backdrop suitable for a film with medieval themes was created.

Giuseppe Visconti did not contribute to the restoration of this place only financially, but he also participated in works of artistic decoration. After his death in 1941, his children cared for development. 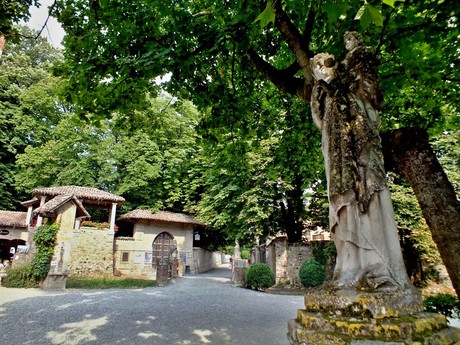 Giuseppe Visconti founded the arts and craft guilds of the medieval style, and the historic Giostra del Biscione procession took place here last Sunday. The event is large during the year and takes place regularly. 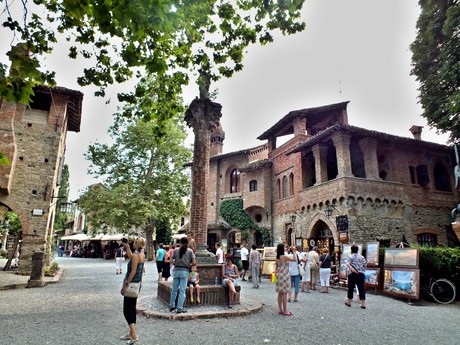 On the busy square there is a building with the inscription Corte vecchia (Old Court), the main building is a shop and exhibition hall and a large yard spreads around. Before entering the courtyard you will find a painted map of the village and a castle with a park. It is a good landmark to help you navigate through the old streets. But if you want to know more, you can visit the information center on your way to the castle park. This is not to be missed because today the village belongs among the tourist destinations. Do not think that Grazzano Viscoti is just a dead museum of the Middle Ages. The village still lives with its everyday modern life, as it still has about 180 inhabitants. 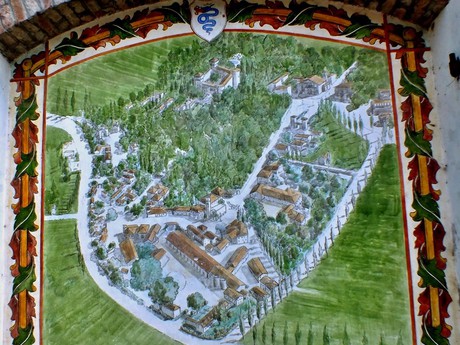 We will ride through the alley the next time, see the walls of the home, and maybe we will reveal something from everyday life.