Our next stop is situated in the Emilia-Romagna region, just a few kilometers south of Piacenza. We are going to the town of Grazzano Visconti. 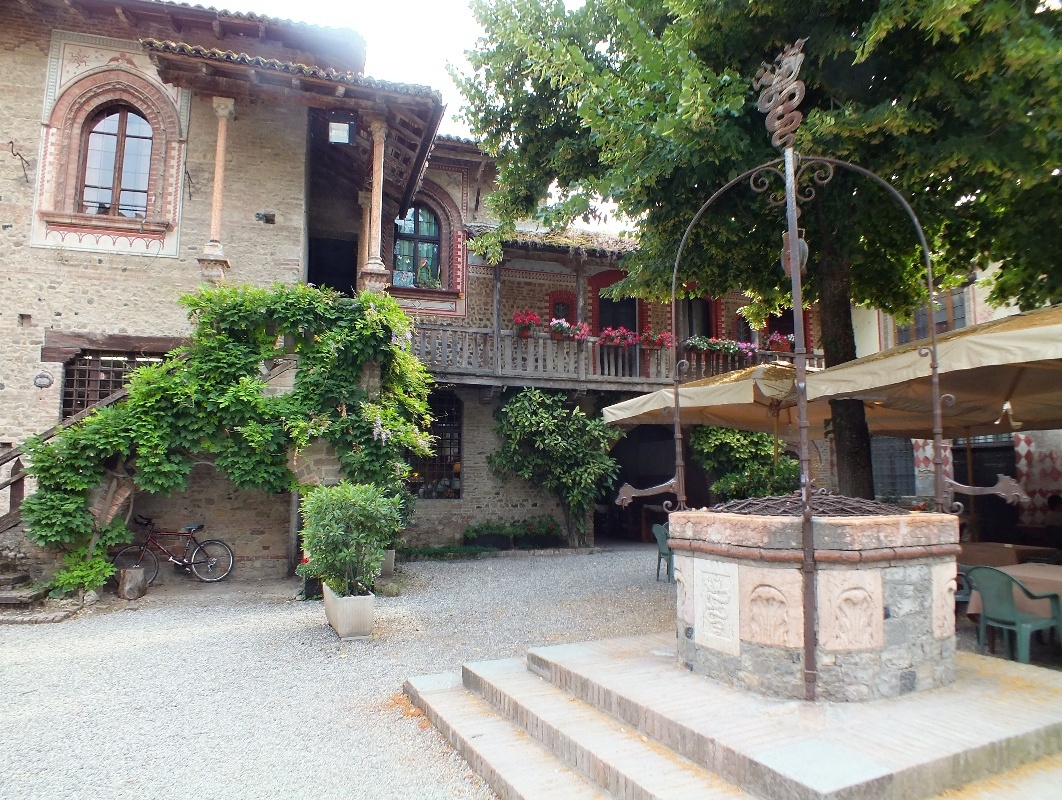 The country around is made up of fields and homesteads - a typical picture of this region. Once you pass through the town gate, you will feel as if you travelled back in time. Suddenly you will find yourself a few centuries back. Surrounded by the walls of medieval terracotta buildings, the singing of birds and the flow of calm atmosphere. The sun's rays of the slowly falling sun penetrate the leaves of the trees. For the first time there is nothing like a dark Middle Ages. However, the present is reminded only by tourists in modern clothes with the technical conveniences of today's times. 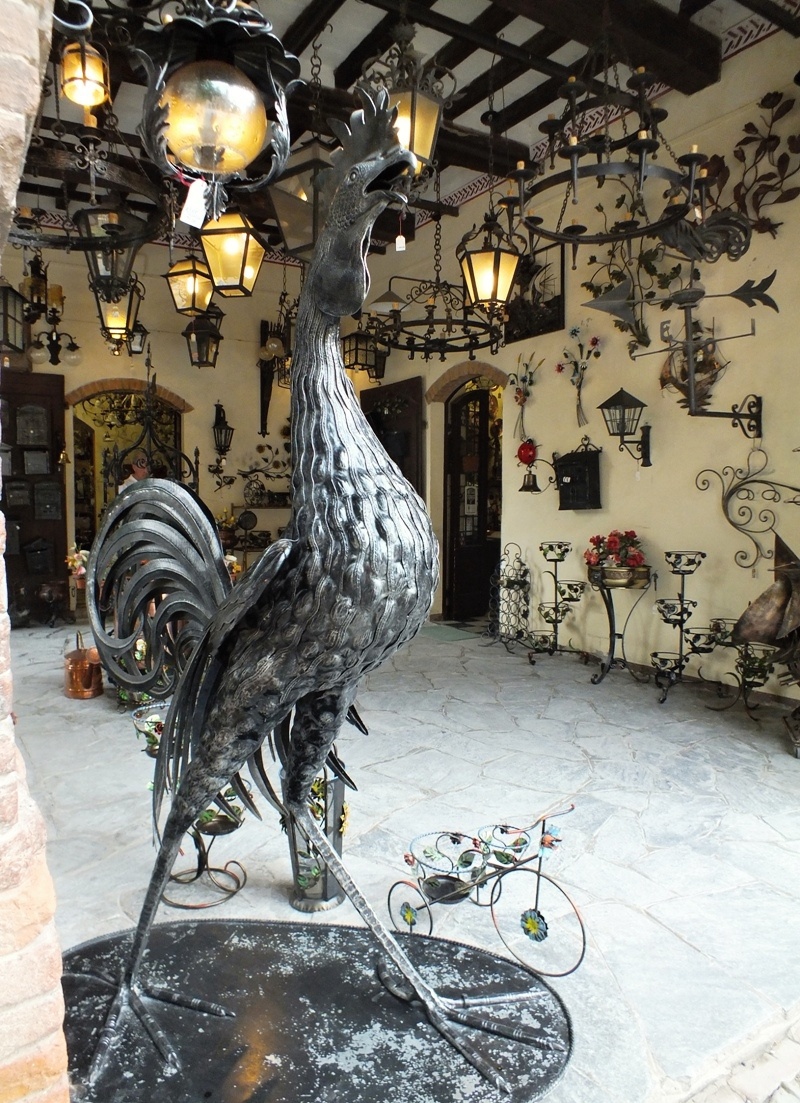 You want to stop in every cottage. There are shops selling arts and crafts from blacksmiths, ceramics, glassmakers, carvers and other artists and craftsmen. But this genuine beauty also has its value. In addition to these unique shops, you can also find the usual ones, such as a shop with paper supplies or a hairdresser.

It does not forget to relax with excellent food, we are in Italy. Therefore you can not miss a nice restaurant. Everything is beautiful here, as in a fairytale or romantic film. Windows, benches, wells, even have a "dog bar". 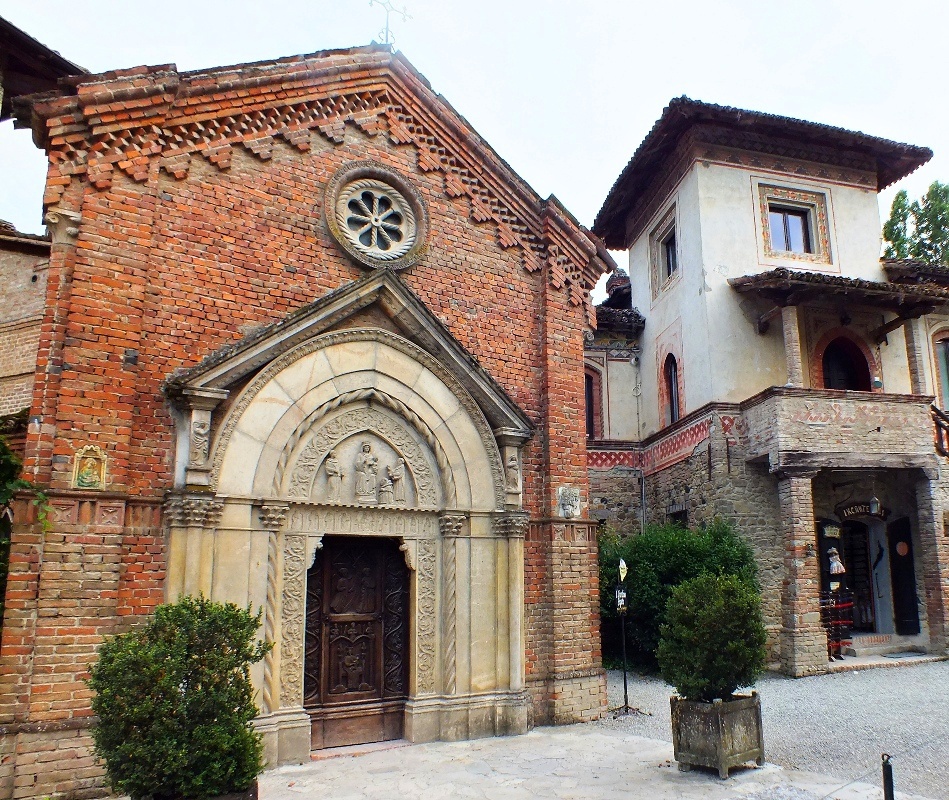 From the fountain in the center of this small town, we turn to a small and cozy Gothic church dedicated to Our Lady. Take a terracotta facade with a marble arched portal and wooden carved doors. All these decorations, from the secular (the columns with the Corinthian warheads) to the saints (figures of the evangelists, Our Lady with the Child), are the works of Giuseppe Visconti, which inspired the contemporary form of the city. The entire temple is complemented by a Gothic tower with two bells.

Here the road is divided, one part leads to the park and the castle, where you have to pay the admission, the second goes through the streets between the houses. When you walk through, do not miss a small stone statue in the middle of the green vegetation. It is the statue of the spirit of Alois. According to the legend, this woman was the bride of the captain of a militia who committed suicide from jealousy after her husband's betrayal, and since then her spirit wanders around the castle and its surroundings. She is a patron of lovers, supposedly pulling tourists behind her legs and letting only those who are sympathetic to her. The statuette is full of coins that are glued to it by the chewing gums so that tourists can incline her favor and give them peace of mind, hanging on bracelets or flowers. 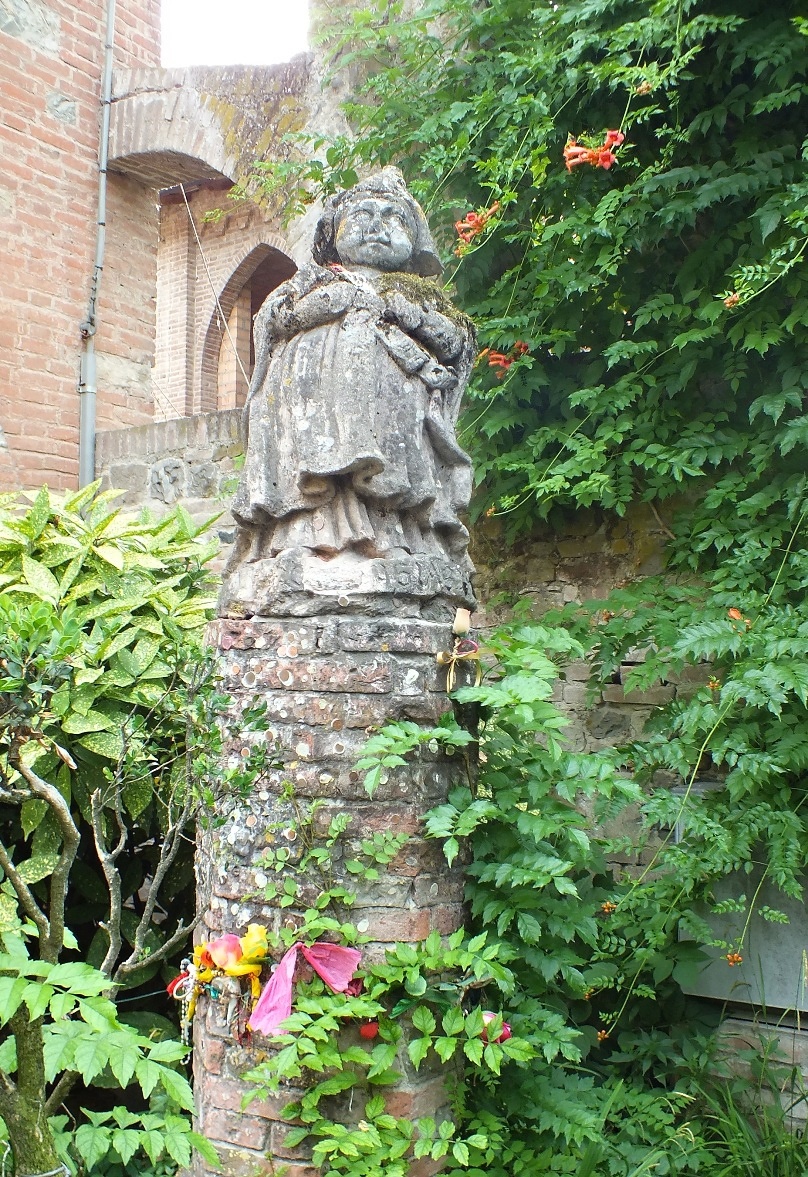 We went to another square with featuring marble-stone well with a Visconti coat of arms. The well is covered with a metal wrought iron cage and decorated with snakes called Biscione (the symbol of the Visconti). Tourists are throwing coins into the well for happiness.
The entire square dominates the construction of the palace with a tower built by Giuseppe Visconti. The clock on the tower plays a melody which remind people of current time. 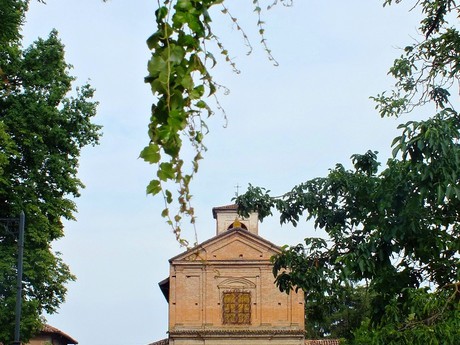 Through the statue-lined bridge we move into the less busy part of the city. On one side there is a green park, and on the other a residential building. Through the gate wearing the small lizards, we reach the next church of Chiesa Parrocchiale dei Santi Cosma e Damiano. Parish church dedicated to St Cosmas and Damian have switched from their Romanesque form to the early 20th century. The church has a bell tower with three bells, and in the confined space on the left side of the temple there are two fresco details attributed to Giott's school. Near the church is a faraway, monastery and cemetery. 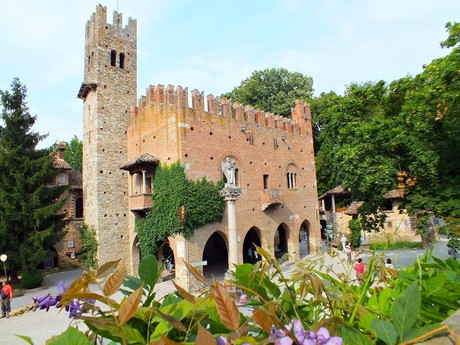 An adjoining blind alley leads you to other houses, and a brick-stone castle is hidden behind the greenery of a large chateau park (covering an area of 150 000 m²). The entrance to the square of a square plan with four towers at the corners (two are cylindrical and two square) led across the drawbridge and surrounded by a water dam. One of the walls of the complex is finished with battlements. The inner courtyards surround the arcades. 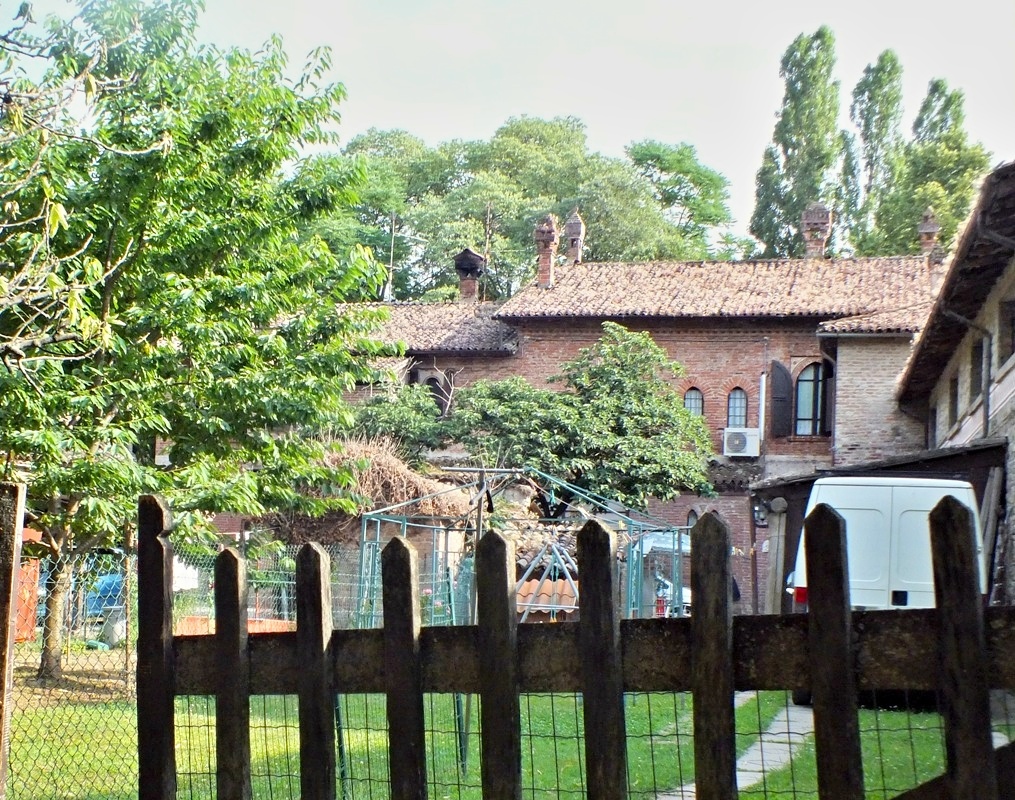 If we return to the castle park, we can find in its most secret corners a romantic medieval garden, a labyrinth, a theater or a private chapel devoted to St Anne. A little trail led us to one of the houses where the medieval scene suddenly changed into one truly 21st century. Medieval windows are covered with rectangular shutters, air conditioning is mounted on a brick wall, washed laundry is  dried in the yard where the car is parked. Civilization simply can not be concealed. So we are returning to reality, as evidenced by the gas station at the gate that we are coming out of the town.