No visitor to Modena can miss Piazza Grande, surrounded by important buildings and sights. 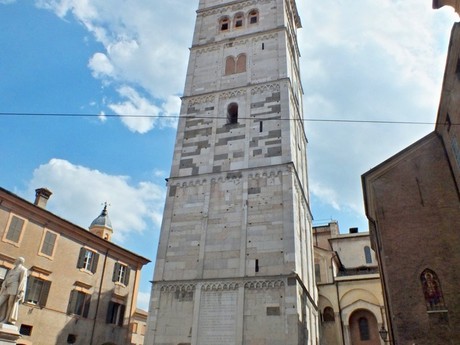 The Tower is always the right point to bring you to something significant. In our case this is the center. Piazza della Torre welcomes us 86.12m high city symbol, the five-storied campanila Torre della Ghirlandina (1224-1319). The tower is the bell tower of the cathedral, and its architecture is a Romanesque style that follows the cathedral with a Gothic octagonal section and a pyramid peak. At the top of the bell tower there are two garlands - garlands, according to which it was named. The interior of the bell tower with five Renaissance bells is decorated with statues and frescoes from the 15th century. 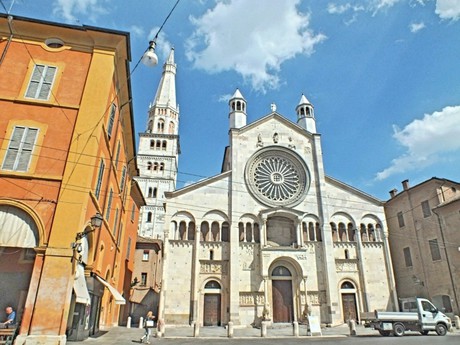 We walked around the tower and a square with the white marble facade of the cathedral, one of the most important Romanesque buildings in Europe, opened in front of us. On the occasion of the patron saint of St. Geminiani (31 January), this square returns to the ancient rush. St. Geminiann, the Bishop of Modena (4th century), is also dedicated to the cathedral itself (1099-1184, at the direction of Countess Matilda Tuscany) whose whole name is Cattedrale Metropolitana di Santa Maria Assunta in Cielo e San Geminiani (Metropolitan Cathedral of the Assumption of the Virgin Mary and St. Geminian), but they all call it the Duomo di Modena. The Cathedral was consecrated on July 12, 1184 by Pope Lucius III.

Already in the 5th century a church was built over the tomb of the saint, and the people of Modena believe that its miraculous intervention has saved them from the Huns, when they conjured up a dense fog that hid the city. We rarely appear in the art of the saint, but it is portrayed as a bishop holding a mirror with a reflection of the Virgin Mary, a model of the city of Modena, or as a calming storm at sea. 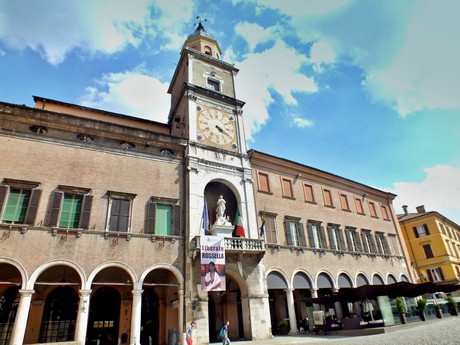 The portal of the St. Geminiani church is supported by two lions and antique columns, followed by a gallery and a rosette window. Facades decorate reliefs from Wiligelm (portraits of the prophets and patriarchs, biblical stories), side porches Porta Regia and Porta dei Principi decorated with reliefs from the life of St. Geminiana. The entrance to the north of Porta del Pescher is decorated with reliefs inspired by the seasons and King Arthur. A wooden crucifix (14th century) and two nativity scenes from the famous Modenic Masters (Antonia Begarelli, 1527 and Guido Mazzoni, 1480 - known as Madonna della Pappa) are also preserved by a three-nave temple with a pulpit decorated with small terracotta statuettes. The remains of the patron saint of the city are kept in the cathedral crypt. 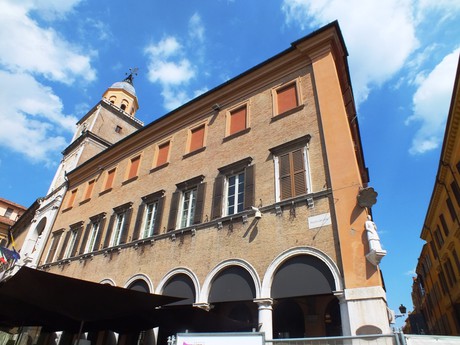 It was in this temple that on September 8, 2007, the funeral of the famous native Modena, the tenor of Luciano Pavarotti, who also had his own museum in the city.

We turned our attention to the right of the cathedral, the town hall building. Pallazzo Communale (17th and 18th centuries) attracts visitors with its Torre Dell'Orologio (15th century) clock tower. This important arcade building was  by the combination of several adjacent medieval buildings used as a social residence. 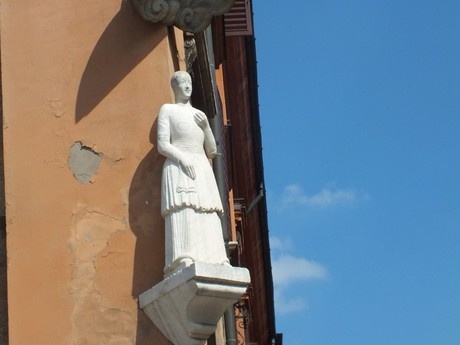 Renaissance frescoes and tapestry decorating the inner hall of the palace are hidden, but at first glance you will notice the pedestals on the corner of the building with a small statue. Bonissima (12th century), as they call this female figure, is likely to represent honesty in business, but the legend speaks of it as a generous lady who helped the poor during frequent famines.

In front of the monumental staircase of the town hall, there is a 3 meter-long marble rectangle - Preda Ringadora (probably part of a Roman building) that used to serve as a pulpit in the Middle Ages, but also as a place for the death penalty and the revelation of a corpse (to identify it) on the day of the market, before that he walked around the square with a shaved head and a special hat). 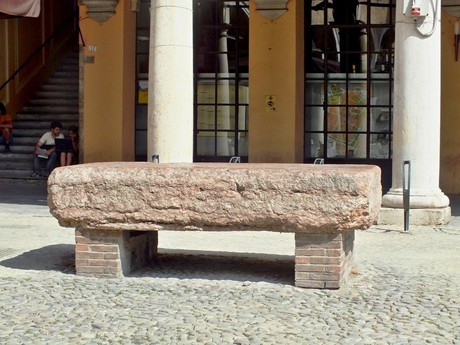 The square has always been the center of trade, Saturday weekly markets, meeting places, political, religious and philosophical debates, tournaments, justice and celebrations. And so it is today, there are festivals and various social events. The sound of the motors on the square just confirms it. At the time of our visit there was a meeting of car veteran enthusiasts. 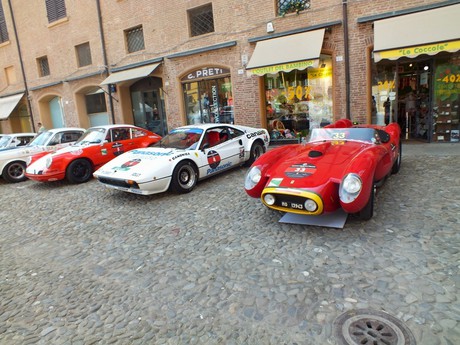 For cars that have also left their significant historical footprint in this city, we will stay. For a week we will take a look inside the Enzo Ferrari Museum.