In the city park in the east of the old part there is the well of St. Patrick or Pozzo di San Patrizio. A two spiral staircases lead down this 61 meter deep well. One fell down and the other up. If you think it served only people, you are wrong. Donkeys walked down to bring water back up. 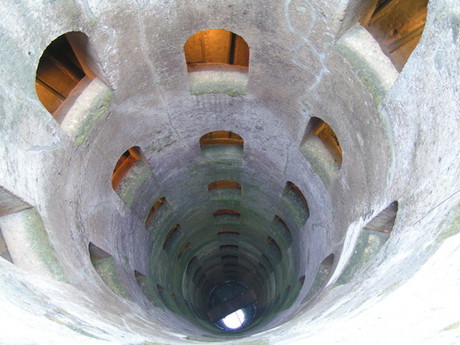 The construction of this monumental well was commenced by Pope Clement VII in 1527, during an event that came into history like Sacco di Roma, the desolation of Rome. The Pope fled to Orvetia and built the well to secure water supplies in the event of siege.

We forgot to mention that Orvieto sits on tufa. Tufa is a rock of volcanic origin is relatively easy to work. Proof is the straight streets and houses built and drained into this stone. One of the buildings is Pozzo della Cava, a well of Etruscan origin of 36 meters in depth. 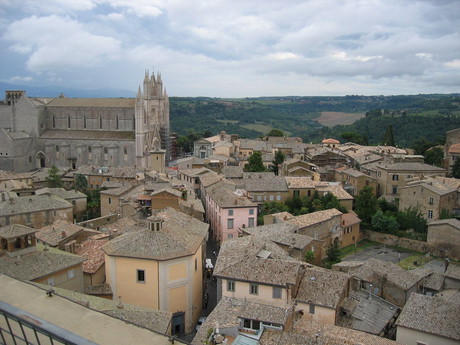 Most of tufa buildings are located along Via della Cava, including the underground, which, for example, hides an ancient Etruscan tomb that became a textile workshop during the Middle Ages. The western part of the elongated street is the Porta Maggiore, the oldest gate in the city, whose construction was also used by tufa. 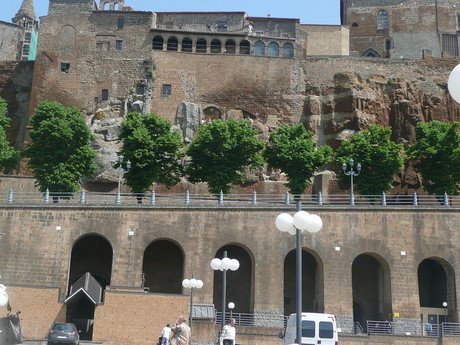 Capitano del Popolo. The main building at the square is undoubtedly the Palazzo del Popolo. However, it is always crowded by parked cars throughout the day. You'll do best if you come here either on Thursday or Saturday morning. Why? Market takes place here on these days.

During the markets, drivers have to park their cars elsewhere and attractive colorful stands replace them. There you may buy delicious fruits, for instance. And yes, be prepared to bargain prices. There are booths selling second-hand clothing, but choosing something to
sit on, will be a little more complicated. You can taste some local homemade honey or pecorino cheese.