Ostia is to be found an hour of car ride from Rome, a train ride takes about the same time. Home to over 85 thousand people, the town is mostly sought after in summer by 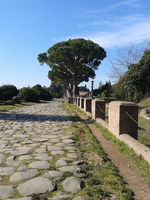 In our article however, we are not interested as much in the town itself as in Ostia Antica, its ancient ruins. The name of the town comes from the Roman word of "os" - "mouth" which referred to town's location at the mouth of the River Tiber. Ostia, also, has been described as Rome's first colony allegedly founded by the fourth king of Rome Ancus Marcius in the 7th century BCE. The oldest known evidence dates back to only 4th century BCE. The oldest buildings are from the 3rd century BCE.

Capitol is one of the most important sights in Ostia Antica. Once the center of religious life the structure stands elevated above its surroundings. It is really hard to miss as it is the only antique structure left standing above ground. Forum also played a central role to life in the town. Here two main arteries crossed, that is Decumanus and Cardo Maximus. On the south edge of Forum, there is the Roma and Augustus temple from the 1st century AD. West from Forum, there is the 3rd century rotunda resembling the Pantheon in Rome. 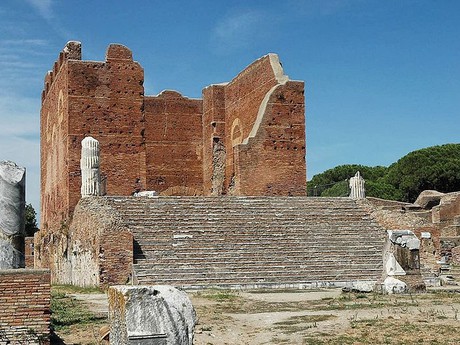 Like any other Roman town, Ostia too had baths. The Baths of Neptune like other baths all over the empire featured richly decorated mosaic floor with the motives of dolhpines, fish, memaids, and Neptune. Inside you may also see local heating system which kept desired temperatures in the different sections of the baths. 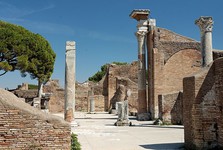 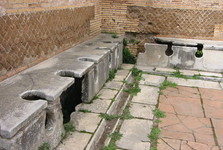 Amphitheaters played important role for social life in the Roman Empire. Ostia's amphitheater is situated right next to the Neptune's baths. Local amphitheater was built in the times of Emperor Augustus. It could contain up to 3 thousand spectators. The upper rows gives magnificent vista over the entire area. 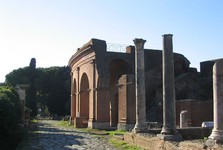 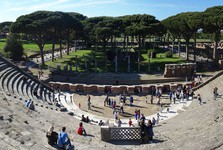