Let's start with the most famous tower in the world. Everybody must have heard about it

or seen it on a picture at least. It goes by the official name of  La Torre Pendente. Its foundations were laid in the year 1173. With the construction of the third floor under way, the tower began to sink on the south side. Therefore, counterweights were added to the north side yet it didn't help. The works were halted for almost

one century. New attempts to counteract the tilt were made. In the mid-14th century the open bell chamber on the top floor was added.

Until the year 1990, tourists could climb the spiral staircase with its 294 steps. However, their weight increased angle tilt until the collapse of the tower became imminent. The tower was closed in the year 1990 for a 10 year renovation. The tilt was modified from 5.5 to shy 4 degrees. The tower was reopened in 2001. 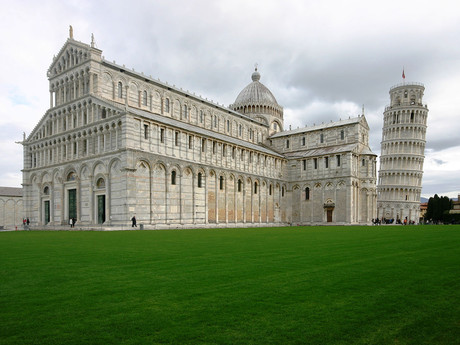 As we have finished the tour of the Leaning tower we move on to Santa Maria Assunta, the five-aisle cathedral which has not been finished yet even though its construction began as early as in the year 1118. Main architectonic features include a dome,

the bronze doors of Porta di San Ranieri with the scenes from the life of Jesus Christ and of Virgin Mary. Be sure to see the pulpit supported by four columns. Statues of Archangel Michael, Hercules and Jesus Christ are also featured on the pulpit.

Now we leave the cathedral and move to the neighboring Baptistery. The title may be uncommon to some. Baptistery is the structure surrounding the baptismal font. The Baptistery in Pisa is the largest one in Italy (it is 58 meter high with a diameter of 34 meters). Its construction began in mid-12th century. 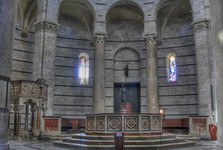 Two centuries into construction works meant different architectonic style of the Baptistery. Notice its lower part which is Romanesque unlike the upper part built in the Gothic style. Inside, the Baptistery is supported by columns, and a pool is situated in its middle for the act of baptism. The structure sits on unstable sand which resulted in a slight tilt of the structure, not as dramatic as in case of the leaning tower.

We will continue in our tour through Pisa in two weeks time.

Published: 8.6.2018
Once Tibur, now Tivoli. The city of sixty thousand is located approximately 30 kilometers east of Rome in the Sabine hills. Emperor Augustus had once enjoyed this place. He sought shelter here from hot summer in Rome.