en.infoglobe.cz » Italy: Vulcano - Because of a TV

I fell in love with one of them at first sight, Vulcano. I was amazed by beautiful air shots of smoldering volcanoes on nearby Stromboli island, small beaches and crystal clear turquoise sea… I wanted to see all of this with my own eyes. I hadn’t been able to resist Vulcano any more and I went to explore the island in the following summer and, as I found out, to spend there my most beautiful vacation. 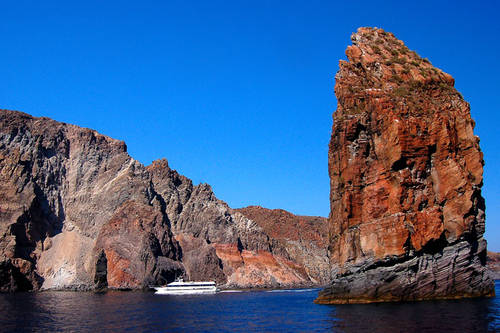 Since I am a curious person that loves physical activites I set out to the place of my dreams with a travel agency specializing in tours combined with tourism. This choice appeared to be very good. We were accommodated in small storeyed buildings in the Vulcano Blu residence. A part of the residence was a private beach. Small cliffs that were surrounded by beaches with various surfaces surrounded the whole island. There was a strong sulfur smell, however, after some time I stopped noticing it. At home the smell transformed into a nice smell that remained in my stuff even after several washes. It always reminded me of beautiful moments I spent there.

I didn’t find any overcrowded beaches, amusement parks, streets overflowing with shops and waiting for their customers, not even night clubs and discos. But I found a peaceful place that had basic services and wonderful nature where the time just stopped going. 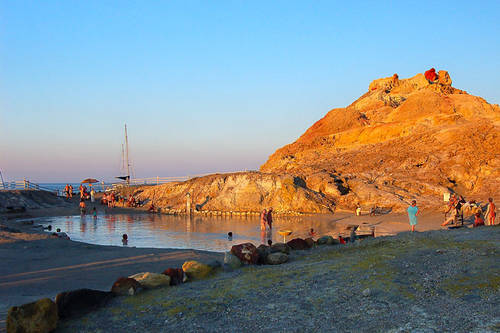 After a week long stay I explored the whole Vulcano Island and attended several tours on neighboring picturesque islands where I swam in an open sea and experienced an unforgettable sunset. Despite all of this the deepest memories in me left amazing volcanoes and mountains. For the first time I understood what the word „treking“ means. And I was enchanted. Together with my great tour party and excellent guide we conquered all of the nearby peaks. We had some beautiful moments that I am glad to remember. 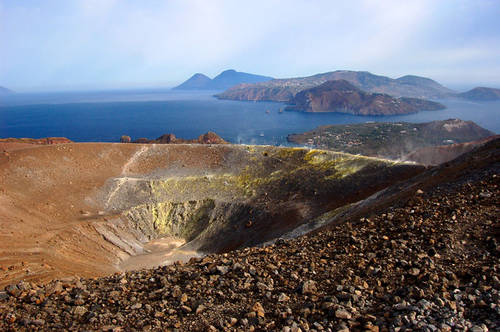 I will share gladly one of them. It was supposed to be a three-hour trip that eventually lasted the whole day. While we were ascending at the highest peak of the archipelago we took one wrong turn. The whole day we wandered about the mountain and tried to reach its peak going straight across the hillside filled with prickly pears, stones and small trees. Even the weather didn’t favored us. Conditions were windless and 30 degrees in shadow. Our sense for humor was growing together with growing exhaustion. Despite our trouble the result was worth it. At the peak we got the real present of a beautiful view over the world. Beneath us we saw nature, village and even the endless sea. But we had to hurry to catch the last ship that would get us to our temporary home in Vulcano. We got to our apartments and beds dirty, skinned, thirsty and also happy. Since then I visit Vulcano only in my dreams but I firmly believe that when my little son Mathyas will be little older I will return there with him. I will show him them the beauty of the place. 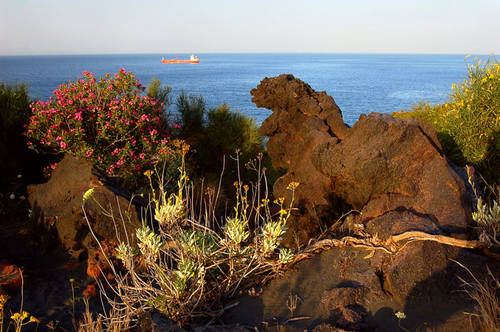 Published: 26.6.2010
When staying in Ischia, you wish certainly to visit Capri Island by ferry. In past, Capri was a summer seat of August and Caesar Emperors, rulers of Antique Rome. Later, also another famous personalities spent their holidays in Capri, too, such as T. G. Masaryk or Max Gorkij, I. S. Turgenew, local villas were owned by writers A. Munthe or C. Malaparte.