en.infoglobe.cz » Japan: Something About Feelings

Of course, they do. And what's interesting for tourists, you are with them and did manage to meet. Even to some extent impersonal Tokyo, a city full of offices, offices and shops, there are places where you inundate by thousands of feelings. 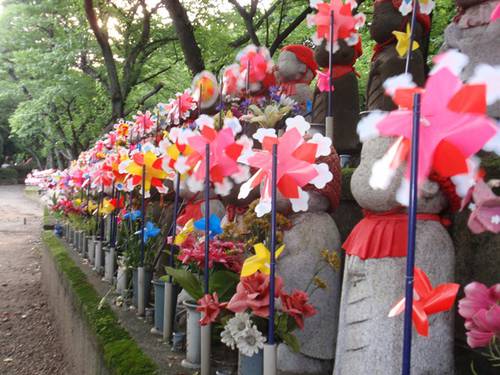 One of these sites is located in area the temple of Zódžódži near Tokyo Tower. While tourists in the tower of height loudly admire breathtaking views of the city, take pictures of magical evening scenery of thousands of lights on, hiker in the temple Zódžódži quietly walks among dozens of silent stone dolls. What is this about? Each is wearing a knit cap, each faces a small vane. When the wind blows, the windmills spin and strange scenery filled with even stranger sound. Some dolls are nearly broken, caps fall them to the side, others are completely new, dressed in rags from the stores. It is here as a reminder to unborn children. Many of these dolls are also endowed gift for Jizo, the protector of unborn children, which helps such children in the afterlife. In every crowd that swarm the station nearby temple Zódžódži, there will at least one person who is paid to candy or gift to her unborn child.

The rest of the crowd then usually headed to the Tokyo Tower, 315 meters high tower, which was built on the model of the Eiffel Tower in Paris. Long top (now the second highest) building of Japan is worth visiting in the evening. Before you export the lift up above the city will dawn, and then when darkness falls on Tokyo, the streets light up in yellow ... Among lighted offices and apartments then streets meander and there hundreds of flashing cars move. Visit Tokyo Tower is definitely a great experience. In addition, feelings of happiness here and you'll find the feelings of vertigo, fear of heights, and nausea.

If we return to the story about the temples, we can´t forget notice that it is a special, often magical places. Where to hide from the bustle of the big city, where the trees stray cats running around, drinking from puddles are huge, black birds around you, and sometimes passes a group of monks. We pray in churches, Japanese pray in temples. Come, bows, clap your hands, throw a few coins among others. Also popular writing wishes on wooden plates, which must be purchased in advance or purchase prophecy written on paper. Papers for predictions are drawn. If oracle bad hang on a tree or string to the wind blew off. 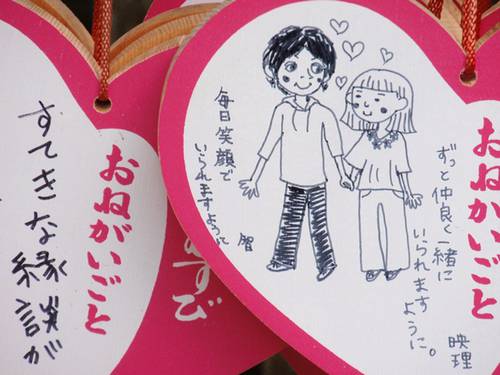 One of the most beautiful temples can be found in Kyoto, which began to serve as the capital city, when in 794 changed the ancient Naru. In addition to numerous architectural monuments, which include two major pavilions, Gold and Silver, we can visit the former imperial palace and temples as Šimogamo or Kamigamo.

Besides Buddhist temples in Japan can also visit the Shinto shrine. Extremely beautiful shrine is located in the aforementioned Nara, an ancient city near Kyoto. Nara is also their temples, such as the Tódaidži Temple, which is the largest wooden building in the world, famous and freely moving deer that passes between parks shrines and temples.

Another interesting place, where the Japanese try to hide their feelings than show off, calls the hourly hotel district, known as Dógenzaka. You get to see it from the street behind the shopping centre "109" in Tokyo, and her visit was definitely worth it, even if we do not plan any of these hotels to visit. At least here you meet with the most silly architecture, as you can imagine.

Hotels are designed as a place where you can shamelessly go with your girlfriend or boyfriend, when they want to occupy one of the rooms, and after payment of leave. For many young Japanese these hotels are the only way to be a moment with your beloved or simply a wonderful and at the same time to avoid crowded apartment own relatives. Just choose hotel and compare the prices. A little necessary to survive in the form of kitsch plastic flamingos at the entrance, tables with quotes about love and crazy names of hotels. Club Strawberry, Chandra hotel, Hotel Caribbean resort. Sometimes it's amazing by which names the hotels attract their customers ...