It's hard to express how much these people are then in Japan surprised when they find out that Czech cuisine is not as varied as the Japanese.

On the other hand, it is true that in Japan can also come across dishes that Europeans shake their heads when they see it. On hot summer days you can enjoy the tea or bean ice cream. Place cheese to wine you can have dried squid. A lovers will not reject the teal green, tea bread for breakfast. There's always something to taste, and those who are not afraid to experiment have certainly find something great in Japan. 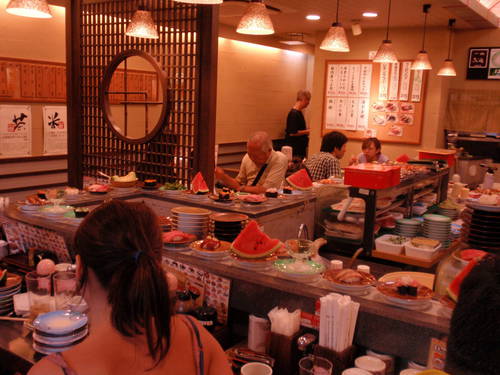 At the beginning we stay at the most typical dish, that at least out of earshot knows almost everyone. That is the sushi. Sushi in Japan a tourist can buy almost anywhere. In restaurants, sushi bars (so-called drying as we these enterprises with a friend nicknamed), in the grocery store or just on the street, as in our hot dog. And it is always excellent.

The reason why the sushi in Japan, so much better than sushi in the country, of course, delicious, fresh fish and good quality rice. In addition to traditional sushi, slice of raw fish on rice, you can also make them very popular sushi maki rolls, whose filling is not always necessarily a fish, but for example, vegetables, eggs or caviar. Some companies then experiment with sushi and make sushi with mozzarella, tomatoes or even iceberg lettuce. 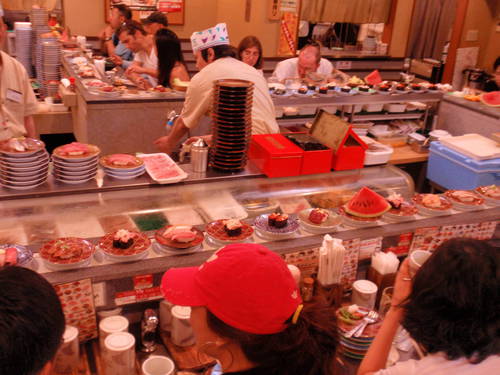 If you would like, when walk in Tokyo, to visit sushi bar, occurs in a number of them here. One of the more well-known visiting is on Omotesando. After entering the restaurant, you'll probably be surprised how many people crowded into such a small space. In the middle of the room stands a circular bar. Here after moving belts run plates with different kinds of sushi. Depending on the colour of the plate, we know how much that is sushi. For sushi on the green, cheapest plate, we pay one hundred and thirty yen. The most expensive sushi on a red plate will cost us four hundred eighty yen.

Chefs are creating sushi right on the bar in front of customers who are sitting under belts with plates and drink sencha, a Japanese green tea. Along the walls in queues, customers are lining up and waiting for free place. For the sushi bar goes to the whole families. In addition, because sushi on plates can also find sweet things, which is appreciated especially children. 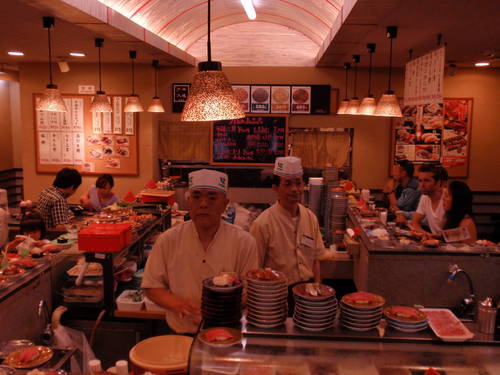 In Japan, of course, you do not need to attend only sushi bars. Definitely worth a visit as well as the traditional businesses where you need to cook okonomijaki, food also known as Japanese omelette, or your favourite soup ramen. Generally speaking, the more traditional business looks, the more likely the waiters will not speak English. English is probably waste to use even in restaurants in small towns. Not always but you must not discourage from dinner. Many restaurants in Japan exhibit in showcases in front plastic highly realistic reproductions of all meals on menu. Although it may seem strange, it is certainly practical. And if you just rush disappoint you a wide variety of fast food restaurants, among which stands out in the first place Makudonarudo, which is McDonald's. 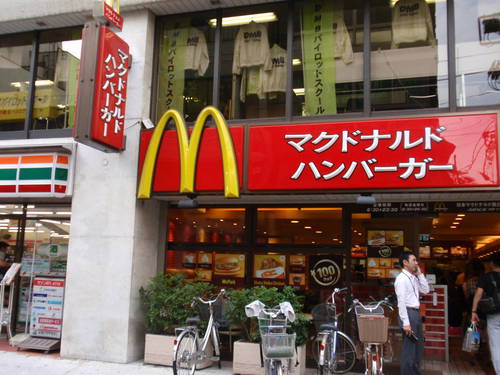 You can get quick food on a number of marketplaces where chefs give you food directly from the pot. Although you do not always manage to find out the ingredients in such food consists in Japan, unlike some other Asian countries really do not worry that you intentionally submitted anywhere something rotten.

Neither of sweets in Japan abound. Candies wagashi, generated from bean paste, but also other kinds of sweet have a long tradition in Japan. Served at tea ceremonies example, can serve as a wedding gift or as a thank you to someone who has done something for us. Candies are wrapped with an elegant bag and the actual shape of sweets is often very imaginative. Some types of candy then in Japan it only for specific occasions, such as the New Year.

Lovers of ice cream will be in heaven in Japan definitely. Next to traditional flavours, here you can taste ice tea or bean cream. Both are very tasty. And if you do not like ice cream, crushed ice will not reject or your favourite pancake in your hand. 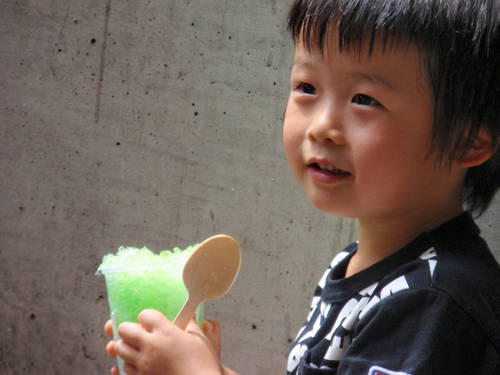 Before becoming a tourist would have to watch out for? Green foods are not always made of tea. In Japan's food production and great word wasabi, green, very spicy horseradish ...