Published: 7.6.2010
Lhasa is a traditional capital of Tibet. At present, the town is a capital of Tibet autonomous area of People's Republic of China. Lhasa became a centre of Tibet Buddhism, and in past, it was a seat of Dalailama.

According to the old legend, invisible demon seized Tibet Mountains, in order to prevent 33rd

King Songcan Gampa the Buddhist Religion into the country. The Princess Wen-ccheng, one of his two King´s wifes, experienced in witchcraft, knew, what to do. If just above demon´s heart Buddhist sanctuary would be established, this evil spirit would be forced to leave the place. So, in such fairytale style, there were described the stories about the fact, why King Songcan Gampo, reigning during 629-649, made the town of Lhasa as his new capital, and let there made a sanctuary Dzokhang. Later, from mixture of old faith relating to demons and Buddha teaching, so called Lamaism or Vadzhray Buddhism was developed. According to Tibet faith, so called Lord´s Kings, transmigraters of previous Dalailamas, become the highest religious representatives.

The function of religious as well as secular head of this Himalaya State was taken over, since 17th century, by Ngawang Lozang Gyamccho, the fifth Dalailama. This spiritual leader let to built, on rests of King Somgcan Gampa, a residence at Lhasa environs, Potala Palace. Later, after many arrangements, this building of thirteen floors, became one of most beautiful buildings in Asia. Even now, this building has the effect on visitors with its majestic tallnest, pure beauty and calm religious atmosphere. So, the complex was, for weighty reasons, registered in UNESCO survey.

We are thankful to Kings of Potala also for the fact that Dzokhang sanctuary was preserved.

Owing to its demonic legend, which is bound to its beginning, it is also named as Tulnang Tsulaghang, (which means „the church, born by means of miracle“). To its greatest rarity belongs „Dzowo Sakyamuni“ - i.e. Buddha statue with diadem (crown) and five rays, covered with jewels, turquoises, meteorites,corals  and amulets, created during life-period of founders of this religion. Till the beginning of 20th century, Lhasa belonged to most isolated places of the world. Most of Tibet pilgrims could reach this metropolis through impassable mountain paths  or across caravan trails only.The foreigners could not come there at all (their arrival was terminated even with capital punishment). So, for instance, Sven Hedin. Swedish traveller and investigator, an expert of Asian countries, when he managed to penetrate into Tibet´s interior, he was not allowed to come and see Lhasa, as target point of his expedition, even from far distance.

The fact that Dalailams´ fear from foreigners was entitled, was proved in 1950, when China

broke all international rights and their military troops seized East Tibet. So, the occupation of this territory begun. Beings´ (Pekings´) government spoke about Tibet´s liberation from its feudal hegemony, anyway, the population offered their hard resistance. Numerous riots were suppressed in bloody way. Nearly 100 000 Tibet persons escaped to India, including 14th Dalailama. However, systematical destruction of Tibet culture started soon, when great many - coloured Tibet ceremonies were forbidden, the monasteries were pludered and destroyed. However, what was not destroyed with Chinese military troops, it was a victim of so called „Cultural Revolution“. Thousands of religious statues were demolished, the pictures and documents were burnt. The monasteries were completely destroyed, and all building elements (stones) were removed. At present, Lhasa is, as a capital of Chinese autonomous area, one of last bastions of Tibet culture, although most of local inhabitants is formed with Chinese. Whereas in rest of the region, the believers have available 4000 religious places only, in Lhasa could be completely restored Dzhokhang, deserted sanctuary, and the pilgrimages allude to this place again. At the same time, Potala Palace was changed into ethnograpic museum, open even to tourists from abroad. 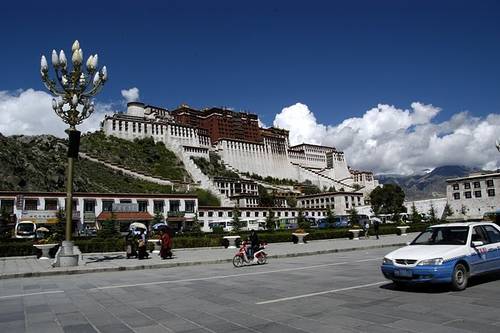